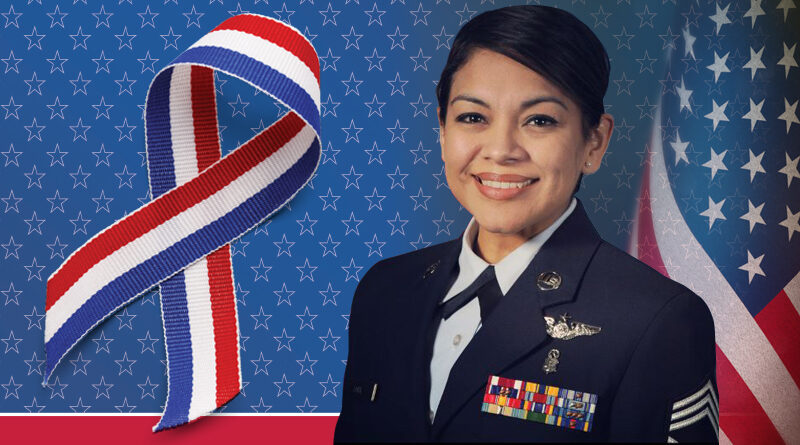 Lisa Lopez struggled as a teen growing up in a single-parent home. Her parents divorced when she was 9 years old and she missed the stability of a strong family unit. Her father, a retired Master Sergeant with 33 years of military experience, always spoke to his young daughter about the benefits of the Armed Forces and encouraged her to join. As high school graduation approached, Lisa – a then-senior at Burbank High School in San Antonio – realized she needed to make a change to get her life back on track. She heeded her dad’s advice.

“I asked my mother to enlist me in the Air Force Reserve at the age of 17,” she said.

As she crossed the stage to receive her diploma, the announcement was made that Lisa had enlisted in the Air Force Reserves. “My dad was surprised, yet extremely proud and relieved. It’s a moment that he still talks about to this day.”

This Friday, Nov. 11, we join our nation in commemorating Veterans Day, to honor and thank all current and former members of our Armed Forces. For the past few weeks leading up to Veterans Day, we’ve featured a handful of the nearly 290 Veterans within CPS Energy. We wrap up that series today by shining the light on Lisa, a Financial Services Analyst with our company’s Budgeting & Analytics team.

Hungering for a more hands-on type of assignment, she attended Flight School and Survival, Evasion, Resistance & Escape training in 2005 to become a flight medic (Emergency Medical Technician). Along with basic medical care, Lisa learned to operate medical emergency equipment, such as the cardiac monitor/defibrillator, the portable oxygen system and surgical suction apparatus.

In 2013, she deployed to Ramstein, Germany, for six months as part of the Operation Enduring Freedom Campaign. She managed medical evacuation schedules for multiple medical crews, making eight medical combat missions herself, to and from Bagram Air Base, Afghanistan. The flight medic noted that flying in and out of the region was stressful because of the increase in combat activity and it was also sometimes physically challenging.

“At 5 feet tall, it was hard lifting and loading our wounded onto the aircraft. A patient weighing 200 pounds, along with their heavy rucksacks on their stretcher, was too much for me to handle. My taller and stronger wingmen would always help out,” said Lisa.

Flights out of Afghanistan averaged 30 – 40 patients who had already been triaged, with each medic caring for 5 to 7 patients aboard the cargo plane. In-flight care included wound management and minor injury treatment, as well as suicidal/homicidal treatment. Along with patient care, Lisa also was trained in flight safety, ensuring flight crews were prepared for possible aircraft emergencies like rapid decompression, fire and crash-landing situations.

At the end of 2014, she was assigned to a medical crew deployed stateside, providing in-flight care for patients returning to their home station (base) after recovering from combat-related injuries, including severe burns and injuries sustained from explosives. “I was basically living out of a suitcase, flying from coast to coast,” said Lisa. “We would fly out of Kelly Field to San Diego, Columbus, Washington D.C., and anywhere in between.”

In 2015, she landed an on-the-ground position, joining the 433rd Medical Group, Lackland AFB, as the Senior Enlisted Leader over 350 members. Her duties were to ensure mission readiness, career development and leadership guidance, as well as recognition for all enlisted members.

Four years later, Lisa was promoted to Chief Master Sergeant, the highest enlisted rank, which only about 1% of those enlisted in the Air Force attain. Out of a pool of 56 candidates, she was one of only seven to be selected at the time.

Lisa admits that success hasn’t come easy and that serving in the military wasn’t anything she expected. “I went in with some familiarity from the experiences my father shared; however, it wasn’t until I wore the uniform myself that I quickly realized how demanding my job was going to be in order to be successful,” she said.

She shared the most challenging aspect of serving was the balancing act of raising two sons on her own (Eric and Isaiah) while working full-time, attending college (she earned a Bachelor of Business Administration degree in accounting from Texas A&M University-San Antonio) and fulfilling her part-time Reserve obligations. “There were so many missed moments with my children, whether it was weekend sporting activities, birthdays or school functions. I won’t ever get that time back,” she said.

Lisa, who proudly still serves as an Air Force Reservist, joined CPS Energy earlier this year as a Financial Services Analyst. Among other responsibilities, she oversees budget activity for several of the company’s business areas and compiles corporate staffing analytics.

Asked if she plans to retire from the military in the foreseeable future, Lisa shared that she is considering retiring in October 2023, when she’ll have 28 years of service under her hat. It will be a bittersweet moment.

“Taking care of wounded warriors and developing our next generation of Air Force leaders has been such a humbling experience and I’d do it all over if I could,” she said. “But I do look forward to what’s in store for me with the extra weekends I’ll have.”

Thank you, Lisa, for your 27-plus years of military service, and thank you to all Veterans for your dedication and unwavering service to our country. Happy Veterans Day!