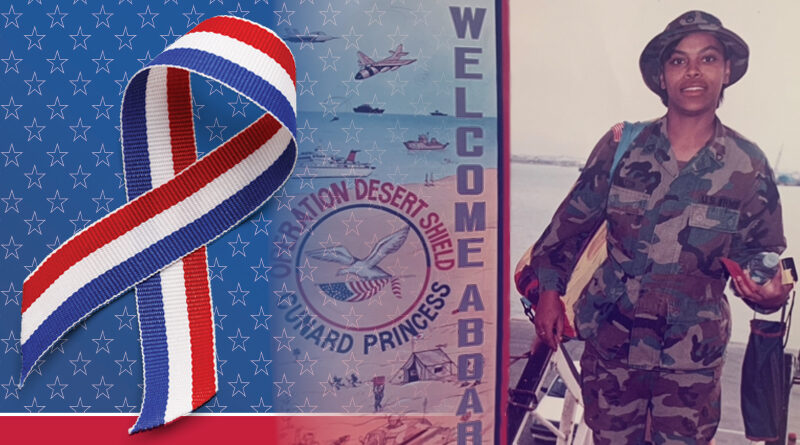 At CPS Energy, we’re proud to have nearly 290 military Veterans among our workforce serving Military City USA’s customers and community! Ahead of Veterans Day, we’re kicking off a series of blogs spotlighting a handful of these Veterans. Today, we shine the light on Missy Dixon.

Missy was born and raised in San Antonio, or as it’s fondly called, Military City USA. She graduated from Sam Houston High School in 1990 and shortly thereafter joined the U.S. Army Reserve, saying that it sounded interesting at the time.

Not long after completing AIT, Missy went from being a Reservist to active-duty status in the U.S. Army to support Operation Desert Storm. She landed in Saudi Arabia on her 19th birthday.

“I graduated high school, went to basic training, AIT and war, all in less than a year. Totally unexpected!” she said.

Missy served in Saudi for 4 months, enduring the sizzling 117-degree days and the frigid 30-degree nights. Despite her sharpshooting skills, Missy’s primary role was to monitor the showering facilities and assist in the laundry facility.

Though her assignment abroad was rather short, it had a long-lasting impact on the Army Veteran, even to this day. Missy recalls Scud (ballistic) missiles being launched from the camp, sometimes two or three times a day. It was ear-piercing and bright, much more intense than fireworks, and conjured up deep emotions. Missy said she couldn’t help but think that someone had just lost their life and wondered if the enemy would strike back. She shared that after serving in Saudi, it took her a while to not be alarmed in certain situations. And, like a lot of soldiers, she still deals with post-traumatic stress disorder (PTSD) and anxiety, particularly when in large crowds or hearing loud noises – the sight and sound of fireworks used to make her want to take cover but it’s become a little more manageable, she says.

After completing her 4-month tour abroad with the Army, she resumed Reserve duties with her unit, the 114th Evacuation hospital in San Antonio, helping in the supply area. Missy continued to serve in the military until 1998 as an E-4 Specialist.

Asked if she ever felt intimidated serving in the Army that’s made up of only about 16% women, she responded that while she encountered some rude and disrespectful males, the team she worked with in Saudi took good care of her and she remains in touch with them to this day.

In 2000, Missy began working in the predominantly male energy industry when she joined CPS Energy. For more than 22 years, she has served the company’s customers and the San Antonio community, primarily as a member of the Overhead Department that installs electrical services. She served as a Timekeeper, Dispatcher and Scheduler in the department before her promotion earlier this year to Administrative/Scheduling Supervisor. She and her staff at our Eastside Service District – located just down the street from Missy’s alma mater – assess workloads and monitor work processes to ensure electrical jobs are completed in a timely manner, so customers have the power they need, when they need it.

This legacy of serving our customers runs deep in Missy’s family. Her husband, Daron, enjoyed a 33-year career with CPS Energy and retired as a Pole Crew Foreman. Collectively, the couple has already amassed 55 years of service with the company. Along the way, they raised three children: Dante, Justice and Darinae.

“My military experience taught me self-discipline and to appreciate life more,” said Missy. “I try to incorporate that in my everyday walk.”

We thank, Missy, for her unwavering service to our nation, community and customers, and we honor all of our nation’s Veterans for protecting us and our freedom.