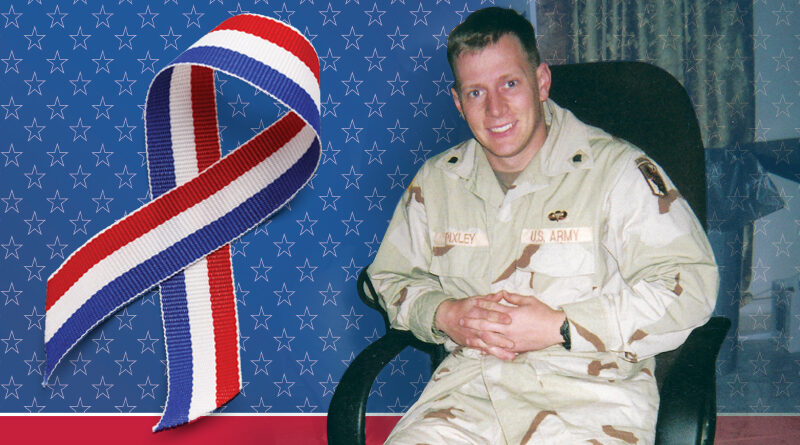 After graduating high school and briefly attending college, Brandon Pixley decided to change professions to fulfill a desire to serve his country and ultimately continue his family’s legacy of service. He joined the U.S. Army in 2002.

Veterans Day (Nov. 11) is just over a week away and today we shine the light on Brandon, an Army Veteran and CPS Energy’s Director of Cybersecurity. He is one of nearly 290 military Veterans working for the company.

Brandon said his desire to serve came from growing up in a military household. His father was the Chief of Staff of the U.S. Army Veterinary Corps, and his grandfather served in the 3rd Army in France under General George S. Patton. He also had a few cousins who served in the U.S. Navy.

Marching in his family’s bootsteps, Brandon completed basic training at Ft. Jackson, South Carolina, which he still fondly recalls today. “My father flew to my ceremony to congratulate me and as he was leaving the parade, he turned around and saluted me. That might not seem like much but to a young Private being saluted by a Colonel who happens to be your father, it is a very special memory that will never leave me.”

Brandon next attended the 3-week Airborne School. In that short amount of time, there’s a lot for soldiers to learn and remember to properly parachute from a plane and ensure they exit and land safely. Along with so many things going through their minds, soldiers must also face any fear of heights they might have. During the third week of training referred to as Jump Week, service members must successfully complete five jumps at around 1,300 feet from a C-130 or C-17 (cargo) aircraft.

“Those first few jumps — jumping out of a perfectly good aircraft — were definitely nerve-wrecking and the nerves never ceased no matter how many jumps I took. Fortunately, I was able to complete my jumps without any major issues,” he said.

Brandon’s advanced individual training, or AIT, was at Ft. Gordon, Georgia, where he was trained as a Microwave Systems Operator-Maintainer/Paratrooper. Along with being trained and ready to parachute to support military operations, he and his team oversaw lines of communication by installing, operating and maintaining microwave communications systems and technical control equipment.

Brandon’s next assignment was at Fort Bragg, North Carolina, where he worked in a classified area on secured telephony switches. His main job there was to support back-up combat communications to the Tactical Operations Center as missions were being carried out in Afghanistan and Iraq.

He deployed to Iraq in 2004, one of the most emotionally charged moments of his military career. He was flying out on his 22nd birthday to a war zone and had to say goodbye to his parents. Brandon spent a year at Camp Victory Army Base in Baghdad, where his primary role was to run a signal center (computer lab).

After completing four-and-a-half years of service, Brandon left the U.S. Army in 2006.

“Looking back, transitioning from the Armed Forces was tough. I was lost because the Army told you where to go, when to be there, what to do, and how to do it. Having that much freedom granted to you all at once can be troublesome for anyone and I was no exception,” he said.

He is one of our many intern success stories, having begun working for CPS Energy 13 years ago as an intern for Enterprise IT Security. Brandon was hired in 2010 as an Infrastructure Analyst and honed his cyber and leadership skills along the way. He later was promoted to Manager of Infrastructure Security and then Director of Threat Intelligence & Security Awareness. Today, he serves as Director of Cybersecurity, providing strategic direction and leading a team to ensure the company has a robust cybersecurity program. This includes routinely collaborating with other utilities, governmental entities and law enforcement agencies at all levels, while also creating threat awareness with employees.

While working for CPS Energy, Brandon met and married Samantha Perez, who works for the company as Manager of Fleet & Safety Informatics. They have two daughters, Kameryn and Alice.

Brandon credits the Army with instilling in him discipline, a strong work ethic and other core values that he carries with him to this day.

We’re honored to recognize Brandon and all military Veterans for proudly wearing the uniform to defend and protect us and our freedoms. Thank you for your service.

One thought on “Army paratrooper lands in cybersecurity field”