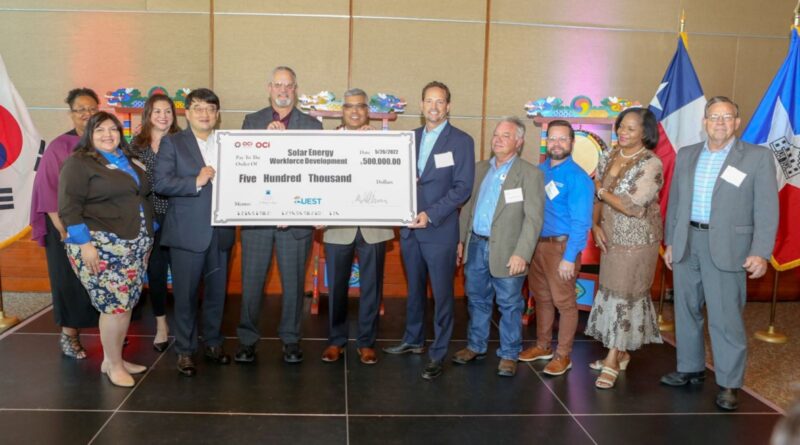 You don’t need to be an expert in energy to know that solar power is here to stay. A major signifier of that happens to be right here in San Antonio—a top solar city in the nation. OCI Solar Power, one of the largest solar energy developers in Texas, recently celebrated its 10th anniversary in San Antonio. CPS Energy leaders were excited to partake in the festivities, as our partnership with OCI Solar Power has led to the development of 500 megawatts (MW) of clean, renewable, and reliable solar projects in San Antonio and throughout Texas. That’s enough to power 100,000 homes.

The anniversary celebration, held in the International Center, combined both the beautiful Korean and Mexican cultures and featured traditional Korean dance and drum performances as well as a mariachi group. Members of the OCI Solar Power executive team as well as Vice Chairman of OCI Company addressed local dignitaries, members of partner organizations and others who showed up for the 10-year luncheon.

“On behalf of my team I want to congratulate you on your success and our collective success together, especially this amazing partnership that we’ve developed,” said Garza. “This was the first-of-its-kind purchase power agreement and economic development agreement combined. Today, because of this strategic partnership with OCI Solar Power, San Antonio is a recognized Solar Superstar—number one in the state of Texas and number five in the nation for solar capacity. You know we have a goal to be number one and we’re going to keep driving towards that.”

The road to more clean energy for our community brings with it lots of opportunity. OCI Solar Power announced a new $500,000 partnership with St. Philip’s College and Project Quest to train job seekers for roles in the solar industry.

That comes on the heels of CPS Energy’s recently announced agreement with Consolidated Edison Development for 300 MW of new solar energy as part of our FlexPOWER Bundle initiative. The development of the solar farm will lead to 250-300 construction jobs and $500,000 to support CPS Energy’s community priorities, i.e. education and customer assistance, over a 10-year period.

Yes, solar power is here to stay and it’s a shining star with benefits!