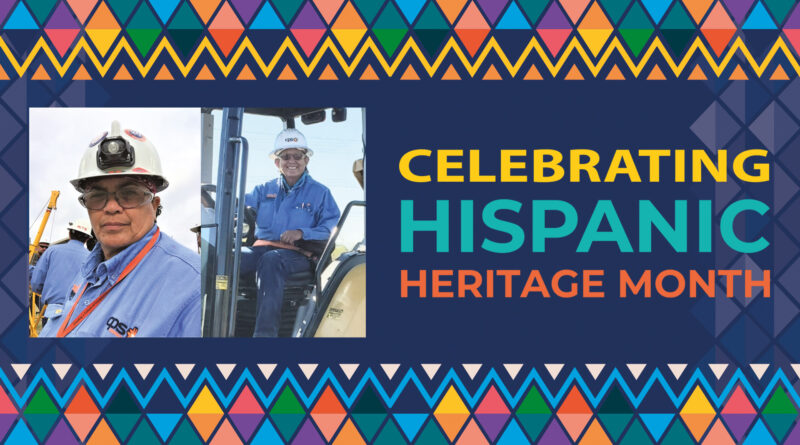 Not many women or even Latinas are employed in the position of foreman.  According to the U.S. Census Bureau of Labor and Statistics, women only represent 3% of this trade. In honor of Hispanic Heritage Month, we share the journeys of two CPS Energy Hispanic employees that help construct our energy grid.

Leticia Ortiz has been a proud member of CPS Energy. As a foreman, she’s been in the role for 20 years. She is part of a team that supervises several construction crews within the Underground Integrated Operations (UIO) area in the Energy Delivery Services division (EDS). She’s part of the valuable contributions Hispanics have made to CPS Energy.

“I think not many Latinas know how great the pay is in the energy field. How many other options they have available,” said Ortiz.

Thanks to her supervision in the office and field, she oversees team members who excavate and repair underground electric lines. She also reviews the rerouting of energy services from meters to our transformers and the relocation of equipment to swap the electric service from overhead (power lines that stretch from pole to pole) to underground (power lines buried in the ground) distribution. She’s also relied upon in emergencies due to her decades of experience.

This CPS Energy foreman walks the talk. She started with the company in 1992 as a utility worker, digging trenches with jackhammers or shovels to install electric service in the city’s booming subdivisions. She cemented her interest in construction by doing weekend jobs with her father. This early experience taught her to enjoy the challenges of operating construction equipment.

Born and raised in San Antonio, she graduated from Thomas Edison High School and learned the craft on the job. Leticia Ortiz is critical to help power the lights in our city and homes.

She’s also left her mark on other major projects for our city and state, including the construction of Interstate 35 (I-35). And she’s had a hand in building the columns that support the famous Alamodome.

“I think I’m breaking barriers. I hope to show that more of us can be encouraged to have an equal opportunity,” added Ortiz.

CPS Energy serves more than 907,000 electric customers and provides natural gas to nearly 374,000 customers;  it’s in making sure that service reaches all these customers that Patricia “Patty” Garcia thrives. Her service to CPS Energy spans three decades, and most of her contributions have been to the UIO.  There she has been 22 years in the role of foreman. Her experience has led her to become one of the most senior supervisors in the department.

In 1988, like many foremen, she began her career as a utility worker. Whether rain or shine, Garcia worked with air tampers and welders to install underground steel gas pipes and conduits to provide natural gas and electric service to customers across Greater San Antonio.

Four years later, she earned a promotion to become a gas trainee in the construction department. There, she assisted supervisors in mapping new infrastructure and securing the needed tools and materials to start and finish a job. She also used this time to obtain a commercial driver’s license (CDL), allowing her to grow and operate larger vehicles. Garcia steadily climbed up the natural gas ladder. Six years later, she ran all the rugged equipment, including backhoes, rock saws, skid loaders, dump trucks, and other industry tools used to dig trenches for installing underground piping for gas distribution.

When asked about what project has stood out the most, without hesitation, she names the Alamo Ranch subdivision.

“It was such a large and growing area. I had to trench some rocky and tough terrain. You had to keep up because new homes were constructed every week,” said Garcia.

It was in October of 2000 that she became a service crew and construction foreman. Now, as a Senior Foreman, she enjoys training the next generation of gas employees, with safety as a top priority.

“Every day is different. You work in various locations and deal with obstacles. But I believe it takes a team to safely understand the job from start to finish,” said Garcia.

Patricia Garcia’s commitment to safety was put in the spotlight. Recently Interim Executive Vice President of EDS Richard Medina was recognized in a special luncheon for Garcia’s safety record.

Of her mentors,  she thanks her parents, who served as an example.

“They always said to me, ‘you can do anything if you work hard.’ I’m proud of my heritage and beginnings. As a Latina, I take pride in the work I’ve contributed to CPS Energy,” added Garcia.

Patty Garcia’s roots are in San Antonio. She graduated from Sidney Lanier High School. She’s proud of the contributions to building CPS Energy’s grid infrastructure and believes she’s laid a foundation for future Latinas to walk in.