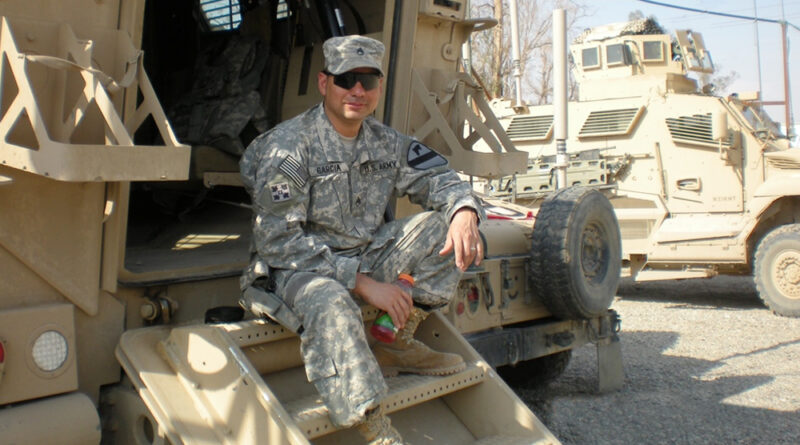 Like many other high school graduates, Isidoro “Izzy” Garcia Jr. couldn’t wait to be out on his own and blaze his own path forward. After receiving his diploma from Thomas Edison High School in San Antonio, he joined the U.S. Navy Reserves. What he didn’t realize at that time was how later in life he would find himself treading in his dad’s and grandfather’s footsteps.

Izzy served in the Navy Reserves for two years before deciding to switch branches, serving on active duty in the Army. His first Army assignment was as an Armor Crewman on the M1A1 Abrams tank, progressing from driver to Gunner to Tank Commander and eventually Senior Wing Tank Commander. While most of his career was spent at Ft. Hood, right here in Texas, Izzy also was stationed at Ft. Riley, Kansas, and Ft. Knox, Kentucky. He completed a couple of tours to Korea and was deployed to Iraq to support both Operation Iraqi Freedom and Operation Enduring Freedom.

In 2010, he became a recruiter in Houston, recalling one particular encounter. “I’m driving this kid from a test site late one evening, and he is talking about his parents and mentions that his dad is Carl Lewis. I said, ‘Yea right. Bring your dad in so we can get your background started.’ He said ok and sure enough Carl Lewis walks in,” said Izzy. “We even got Carl to participate in a run with future soldiers. It’s something I’ll never forget.”

With 22 years of service under his hat, Izzy retired from the military in 2016 as a Sergeant First Class.

“I was lucky to have great leaders who took the time to train and show you things, and during the recruiting assignment, I had the chance to network and meet a lot of people,” he said of his military experience.

Izzy, who has raised four children (Miranda, Sarah, Benjamin and Hannah) with his wife Lewdeana, earned a Bachelor of Science degree in psychology from Texas A&M-San Antonio. He began working for CPS Energy as a contractor in People & Culture in September 2021 and earlier this year accepted a permanent role in the department, becoming a third-generation employee for CPS Energy and continuing a legacy of service. His grandfather, Pedro Garcia, worked to deliver natural gas and electric services to our community as did his father, Isidoro Garcia, who retired from the company in 2004 with 34 years of service. Additionally, his brother, Lucio Salas, is currently a Foreman in our Civil Support area.

Izzy was hired by our company as a Talent Advisor where he’s working to recruit talent amid today’s competitive market, and where he’s able to draw on his educational and recruiting experience.

“I work for a great team and company where there’s a culture of people looking out for one another, and willing to help you and explain things if you don’t understand something,” he said. “When you’re speaking to a co-worker, you’re treated with respect, regardless of what area they work in or what job title they have.”

At CPS Energy, we have a longstanding tradition of giving back to our community – Military City USA – that we’ve served for more than 160 years and to those who’ve proudly worn the uniform to serve our country. As we recognize National Hire a Veteran Day, we’re honored to have Izzy and nearly 280 other military veterans working for us. It’s humbling for us to be able to support our nation’s veterans through employment opportunities, as well as bid/contract opportunities and participation in the Department of Defense SkillBridge Program. We deeply appreciate all military veterans and thank them for their service.