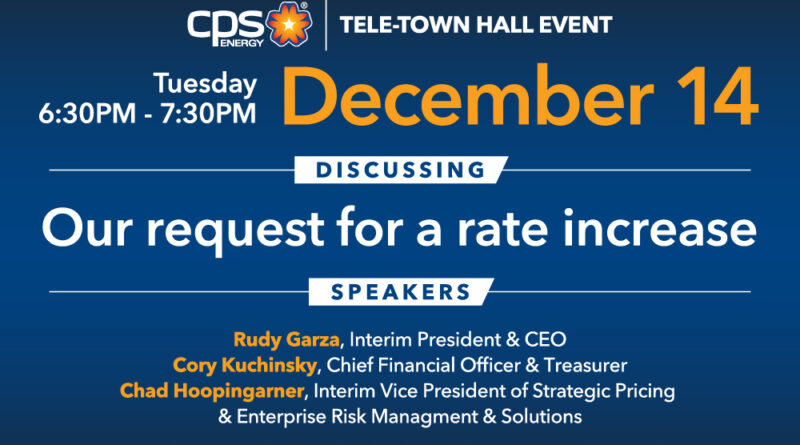 December 13, 2021 (SAN ANTONIO) – CPS Energy’s Board of Trustees will host a public input session on a proposed 3.85% rate request the energy company is seeking to address its immediate financial pressures. The session is scheduled for Monday, December 13 at 6 p.m. The latest in a series of tele-town halls also will be held on Tuesday, December 14 at 6:30 p.m. with the company’s senior leadership engaging in a two-way, live conversation as they answer customers’ questions about the rate request.

CPS Energy presented the rate request to the San Antonio City Council on December 1. It’s the first time since 2013 CPS Energy has officially sought an increase from its owner, the City of San Antonio. The energy company’s leadership made the request after about six months of conversation with the CPS Energy Board of Trustees and several weeks of robust conversations with customers and the community about the need for a rate increase. CPS Energy’s senior leadership has worked closely with City staff on the rate request, collaborating on a focused path to address the company’s immediate financial pressures.

The four key drivers included in the proposed 3.85% rate request include:

“ We have worked diligently to save money over the past decade to the tune of $906 million while we serve a community of about two million people at the same costs we have charged for close to a decade. We are not asking our community for a penny more than what is needed to stabilize us financially and start making incremental critical investments needed to continue serving our community,” said Rudy D. Garza, Interim President & CEO of CPS Energy.

The rate request equates to an additional $3.84 on an average residential monthly bill of about $152. If approved by CPS Energy’s Board of Trustees and City Council in January, it would take effect in March 2022. Not included in the proposed rate request is the recovery of paid legitimate power costs incurred during Winter Storm Uri. A regulatory asset – a charge to be included in the fuel adjustment portion of a customer’s bill – is proposed to spread that cost over 25 years. It also requires approval by the Board of Trustees and City Council and would have a residential bill impact of $1.26 a month. Combined, the total costs would be $5.10 for the average electric & gas residential customer.

However, the base rate increase would be negated for customers participating in CPS Energy’s Affordability Discount Program. The company is also planning to widen the program to serve more low-income customers.

The CPS Energy website offers answers to frequently asked questions regarding the rate request, as well as a new bill estimator that allows residential and small commercial customers to see the potential impact to their bill based on their normal energy usage.

CPS Energy is committed to keeping the community informed and make it easy for customers to hear directly from leadership about the proposed rate request. Customers can register for the December 14 tele-town hall on the CPS Energy website. City Council members are also hosting town halls in their districts and presentations are scheduled at CPS Energy’s utility assistance fairs. Details about upcoming events can be found on the website here.