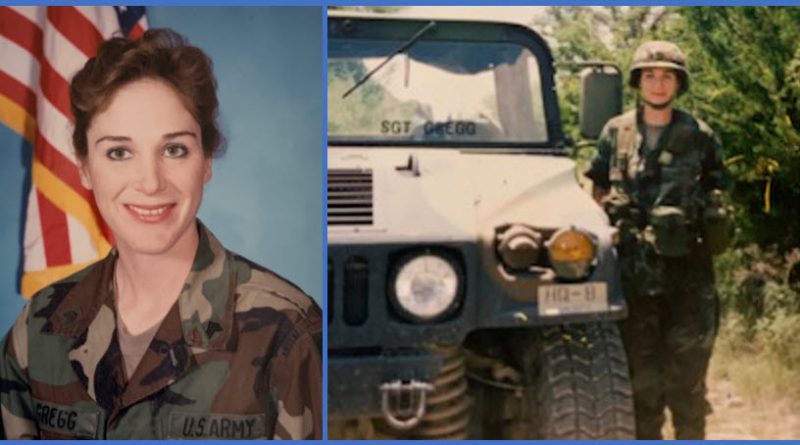 When her high school friend, Cindy, wanted to join the Marines, Lisa Gregg’s father sat Cindy down for a serious heart-to-heart conversation. The Army Lieutenant Colonel shared his military experiences with the petite impressionable teenager. He spoke to her about what she could expect and how she could succeed in the Armed Forces, turning her attention to the Army Reserve and National Guard.

The conversation piqued Cindy’s interest in the Texas National Guard, enough that she soon visited a recruiting office in San Antonio, accompanied by her friend. However, in an unexpected twist of events, it was Lisa who signed up that day while Cindy had a change of heart and decided a military career wasn’t in her cards.

Lisa served 10 years in the Armed Forces: the Texas Army National Guard from 1983-1985; Army Reserve from 1986-1988; and Army Active Guard Reserve from 1988-1993. Her primary duties were in the Personnel area, where she oversaw promotions, leadership training, annual evaluations for enlisted personnel and officers, as well as awards and ceremonies.

While Lisa valued this work, she noted that one of her most memorable and fulfilling moments occurred during field training – a requirement for the primary leadership development course she completed at Fort Hood, Texas.

“I was one of only three females in my class. We were held accountable for completing all parts of the course just like our male counterparts,” she said. “Although I was Active Guard Reserve at the time and everyone else was Active Duty Army, I was just as tough as they were. I did everything they did and even better than some of my colleagues.” Demonstrating her perseverance and strength, she completed the program’s 5-mile run with a sprained ankle and was the only female in her class to carry an M60 – a machine gun weighing 20-plus pounds – during field training.

“The course was my initiation on the difference between a manager and a leader,” said Lisa, who was promoted to Sergeant before leaving the Reserve. “Today, I continue to strive to set the example and be the best I can be regardless of position or title.”

Soft heart for helping others

Lisa earned her master’s degree in organizational development from the University of the Incarnate Word. Though she no longer wears a military uniform, she has an unwavering passion for helping servicemembers and their families, especially those making the oftentimes challenging transition out of the military.

She accepted an assignment with Bexar County as a Career Counselor for the Veterans Transition Center that officially opened in 2018. Prior to its opening, she attended Joint Base San Antonio (JBSA) Partner meetings, which have grown fivefold – from about a dozen partners to nearly 60 today that attend weekly virtual meetups.

“The Bexar County and JBSA partnership began with us surveying transitioning servicemembers who were attending Transition Assistance Programs (TAPs) at Fort Sam, Lackland and Randolph. We wanted to know how many and why service members were staying in San Antonio and what employment opportunities they were seeking in the civilian sector. This had never been done at JBSA,” said Lisa.

The military veteran also created various training programs for the Transition Center, such as resume writing, career choices and social media. Additionally, she reached out to San Antonio business partners to help in the hiring of transitioning servicemembers.

Lisa joined CPS Energy in April 2020 as a Talent Advisor in People & Culture, our version of Human Resources. She recruits and fills positions for our utility. During this tight pandemic-impacted budget year, we’re only hiring for critical positions. When regular hiring ramps back up, Lisa hopes to bring more veterans on board.

“I love recruiting and working with the military. I’m hoping to recruit more military folks into CPS Energy by partnering with JBSA and building onto the internships for transitioning servicemembers, as well as military spouses.”

As Veterans Day quickly approaches, we want to thank Lisa, our nearly 300 veterans and all of those who served our nation for their dedication and selflessness in honorably serving our great country.