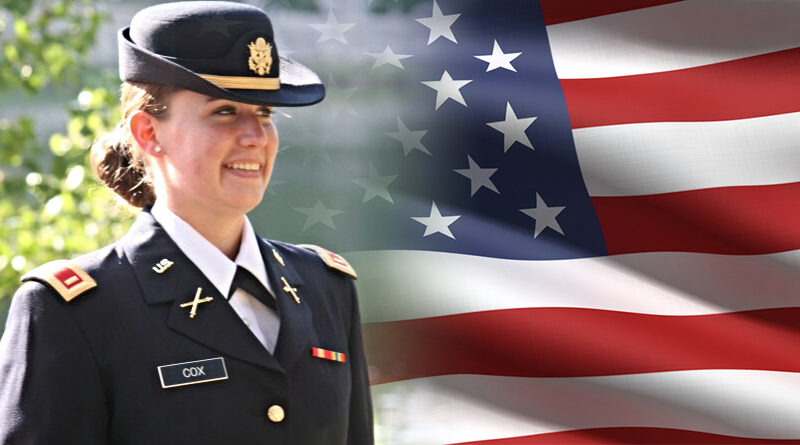 Some kids, when asked what they’d like to be when they grow up, respond that they want to be a doctor, veterinarian, police office or maybe a teacher. Not Christina Cox. At the tender age of 5 or 6, the Indiana native boldly responded that she wanted to be in the military.

As we launch our series honoring a few of the nearly 280 veterans at CPS Energy, today we shine the light on Christina.

Most Americans born before 2001 probably know exactly where they were and what they were doing on 9/11. It was a time that seemed unfathomable, surreal. Christina remembers it well, although she was just in the fifth grade. She recalls being in the classroom that perilous day and parents being called to come pick up their children. It was also a day that firmed up the strong-minded youngster’s earlier decision to serve our country.

“My family always spoke highly of the military growing up,” says Christina. “My dad wanted to join the Marines but he was medically denied. The events of 9/11 really made me determined to join as soon as I was of age.”

When she got home that day, she and her parents watched the TV in horror. “I was slightly stunned; it felt like a movie at first. I couldn’t watch anymore. I walked out and cried. I was angry because I was young and couldn’t do anything.”

At the age of 17, Christina could and did do something. With her parents’ consent, she joined the Chemical, Biological, Radiological and Nuclear (CBRN) area of the U.S. Army Reserve. She completed basic training between her high school junior and senior years, and finished CBRN training immediately after high school graduation in 2010.

The following year, Christina entered the highly prestigious U.S. Military Academy at West Point, which accepts only about 12% of all candidates who apply and where less than 20% of all cadets are female.

“It wasn’t too terrible,” says Christina of attending the male-dominated academy. “I grew up being raised by my dad, grandfather and uncle so I was comfortable being surrounded by males.” At West Point, she joined the Field Artillery area and was attached to a tank company, which had only one other female. “My ForwardObserver team became a family and looked after us to ensure we were safe and felt comfortable,” she says.

Christina graduated with a mechanical engineering degree in 2015 and was stationed with the 1st Infantry Division – nicknamed the Big Red One – at Fort Riley, Kansas. Unfortunately, immediately after arriving, she broke her back during a training event and underwent therapy. While slated for surgery, the second lieutenant was called upon to serve as acting commander over dozens of troops for about three weeks.

During that time, many soldiers at Ft. Riley were getting set to be assigned in South Korea. Christina had to ensure they had everything they needed for their new assignment. She also had to make sure that materials and equipment like artillery that were to remain on the base – not being transported to South Korea – were accounted for and signed over to the appropriate person.

While she had persevered and bounced back from other less-serious injuries, Christina’s broken back became a life-changer. Though her surgery went well, an assessment indicated she was no longer physically fit for active duty. Christina was medically retired from the Armed Forces in December 2018, just shy of 10 years of service.

“Emotionally, I wasn’t ready to leave the military. I had always imagined myself making a career of it and wasn’t prepared to enter the civilian workforce. I had to learn who I was if I wasn’t a soldier. I’m still learning who I am outside of uniform to this day,” she says.

Today, Christina wears a new hat, as an Engineering Associate for CPS Energy’s Power Generation area. She joined our energy company in March 2020. In her new career, she creates models and reports related to several of our power plants. These models and reports help ensure every piece of the plants’ equipment is functioning at its best and help identify any issues that may need to be addressed. These efforts are critical in keeping our plants operational and available, supplying our community and our state’s grid with electrical power.

While Christina was able to assist her co-workers at the plants in a very limited capacity during Winter Storm Uri because of road closures and internet connectivity issues, she’s currently working to refine winter readiness reports for our Braunig units to avoid any downtime should another winter weather event take place.

Though we know her military career ended long before she had hoped, we’re glad to have Christina at CPS Energy and we extend our deep appreciation for her dedication and service to our country, our community and our Company. We also thank every veteran for their unwavering, steadfast service to our nation as Veterans Day draws closer.