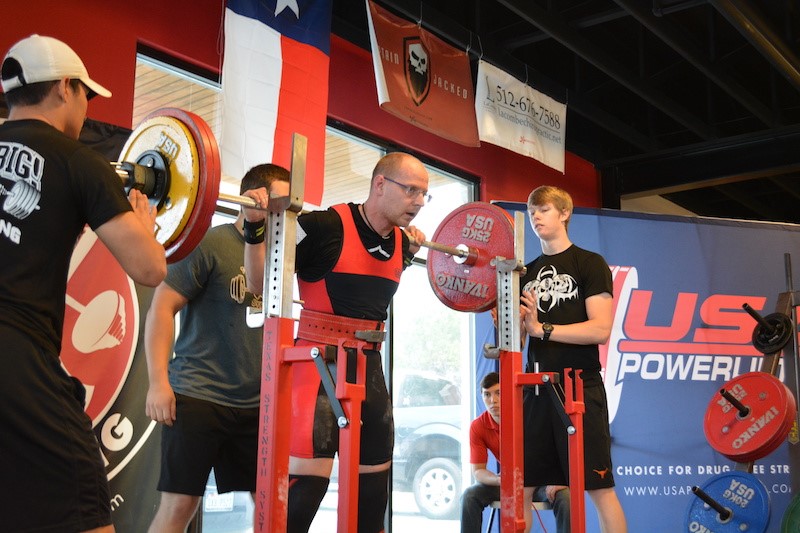 One pound more, that’s Brandon’s goal. Doesn’t seem like much of a goal. Our culture is driven by big myths and exaggerated stories of individuals who progress by leaps and bounds. Yet some of us find greater value in small, incremental progression. Some of us grind for just one pound more.

Meet Brandon Pixley. Brandon is CPS Energy’s Manager of Infrastructure Security. He started as an intern from UTSA and became a full-time employee seven years ago. It’s a journey he’s proud of, a series of career progressions.

Brandon recently started a new journey — competition power lifting. He played team sports growing up in Europe and the States as an Army brat. After high school Brandon joined the Army and became a Paratrooper. It was in the Army that he started lifting weights. “I didn’t really know exactly what I was doing at that time,” recalls Brandon. “My form and posture were terrible. It didn’t work out very well.”  Nor did it last.

Brandon was medically discharged after 4 years of service. His time spent jumping out of planes seriously injured his lower back. His injury, school load and job all led to a period of inactivity. His physical progression had flatlined. “One day I saw myself and I was well over what I considered a good weight. I was in the 200’s with no muscle, and so I said, ‘I have to do something different.’”

Something different turned out to be cycling. Brandon completed his first 100-kilometer bike ride as a member of CPS Energy’s MS150 team. While riding one day he passed a CrossFit gym. “I said CrossFit, what is that? I rolled inside wearing my spandex. The owner told me to come back Monday. I did, and I loved it, got hooked.”  CrossFit training had Brandon back down to his Army weight, gave him endurance and he felt great. Still, Brandon felt something lacking, that something was strength.  He began to train with a coach to gain it back.

After being given the OK to lift and time to reflect, Brandon once again felt something lacking in his routine. Soon he began looking for something else, something new to help him progress, to help him find one pound more. While working his new regimen, a workout partner suggested entering a Powerlifting competition. Powerlifting is a strength sport that consists of three attempts at maximal weight on three lifts: squat, bench press and deadlift.

“I signed up and they (my partner) never did, and so I was stuck at the meet by myself. I had no idea what I was doing. I didn’t know I needed a shirt to go under my singlet. I didn’t even have my own singlet. I borrowed my female coach’s singlet that was a size small.  When I put it on, this kid who was about 15 years old said, ‘Sir-that is the smallest singlet I’ve ever seen’.”  Brandon dissolves into laughter at the memory. Despite the obstacles, Brandon did well at the meet and was hooked.

Brandon recently competed in his second competition, placing 7 out of 14 in his class. He’s training for his next competition in September. He credits his girlfriend Samantha for motivating him on the days he wants to stay in bed and for being his biggest cheerleader.

Brandon’s high point in powerlifting was the day he lifted more than a combined 1,000 pounds while training.  He says almost anyone can achieve what he has. It’s a matter of discipline and desire. It’s the same philosophy he exhibits here at CPS Energy as a manager. Even just one pound more is new personal best.  Brandon lives his life as a journey. It’s a journey to be enjoyed, to be engaged in and to realize it’s OK to progress at just “one pound more.”

CPS Energy Unplugged highlights what members of our team do beyond the workday – their community and volunteer efforts, unique interests and hobbies, or personal accomplishments.

Other similar stories:
Unplugged: Gallegos has thick skin for the pigskin
Unplugged: Birding is a family tradition
Unplugged: Going the distance