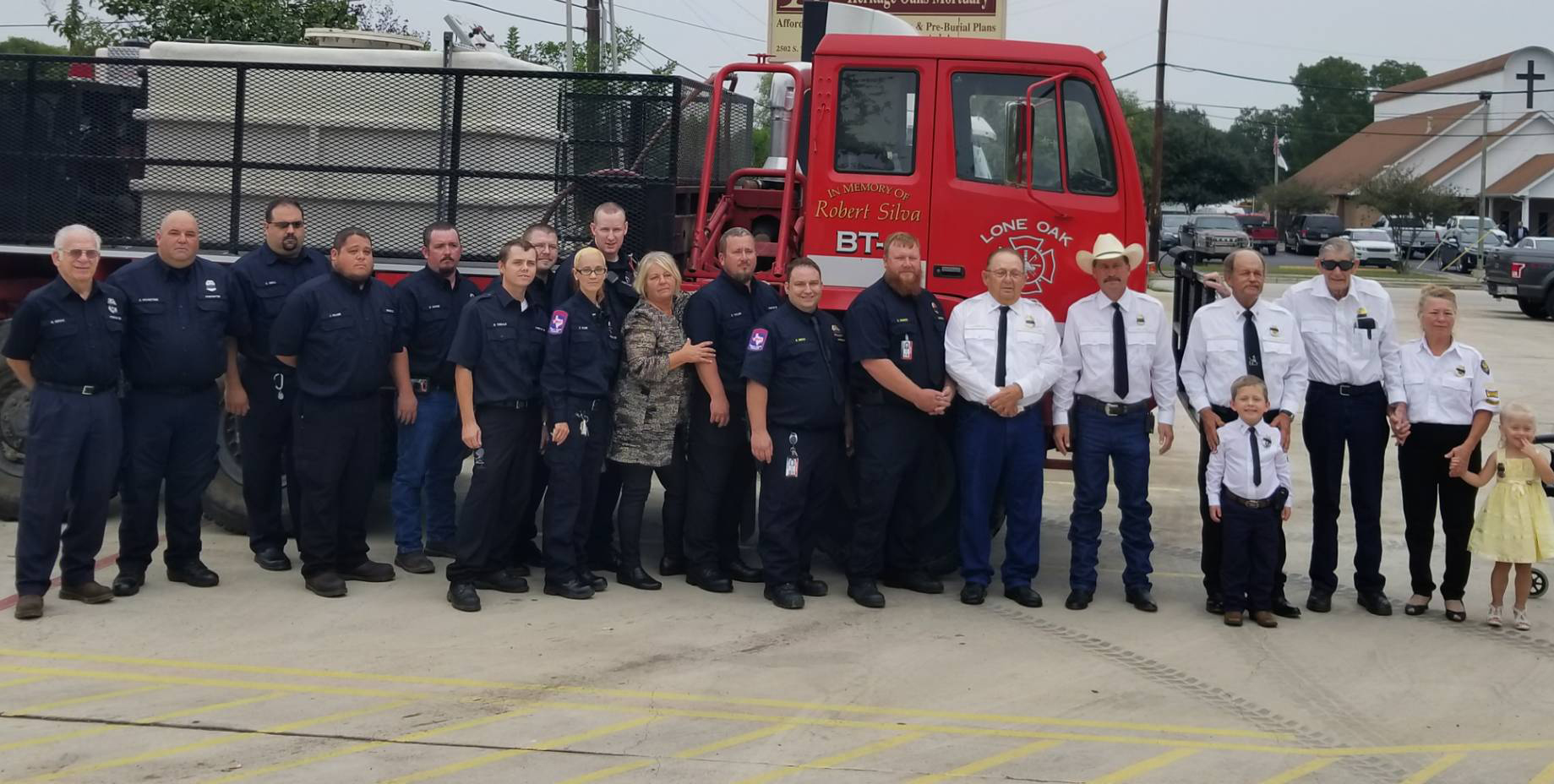 When moving to or driving through small communities, most folks don’t consider who’s going to come to their aid if they’re involved in an accident, or if their vehicle or home catches fire. That is, until those critical services are needed.

For nearly 30 years, Carl Kosub has served with the Lone Oak Volunteer Fire Department (VFD), located at Highway 87 and Loop 1604, about 14 miles southeast of San Antonio. It covers an approximately 48-square-mile rural area. The Lone Oak VFD handles about 50 calls a month. “Most of the calls we respond to are for EMS, wrecks and grass fires,” he says.

Lone Oak’s volunteer firefighters train twice a month at the local firehouse to handle these types of situations. Volunteers must know how to properly use breathing apparatuses; how to handle various types of fires including grass and brush fires, structural fires and chemical fires; and how to drive the station’s military-style brush truck used for fighting small brush and grass fires, and Freightliner pumper trucks that carry as much as 3,000 gallons of water.

Aside from Carl, Lone Oak’s 15-member crew includes a couple of our retired employees – Jerry Beavers and Albert Mihalski, who provide support and assist with training.

Carl, a father of two grown daughters, has carried on his family’s legacy of serving with the Lone Oak VFD and for the past three years has served as its fire chief: his grandfather, Paul Boeck, was one of the VFD’s founders; his dad, Clarence Kosub, was a volunteer firefighter for more than two decades and still assists with fundraising events.

Being chief isn’t a responsibility Carl takes lightly. “I’m a hands-on chief, not one who’s going to stand back. I’m going to grab a hose and start helping,” he says. One of the first calls he made after making chief was to a mobile home fire. Most people tend to know each other in small, close-knit communities, and Carl knew the owners. Following his instincts, he immediately jumped into action to help his fellow firefighters douse the fire. The owners, he’s glad to report, were OK. Though the home was destroyed, the couple has since rebuilt.

Carl also is an Emergency Care Attendant (ECA), meaning that he can administer first aid and oxygen, apply bandaging/splinting, control bleeding and use an AED (defibrillator) device to jump-start a person’s heart.

Much like in his role as chief and an ECA, Carl is not one to “stand back” at work either. A tenured employee with 23 years’ experience at our Company, he serves as a general designer and project manager to plan and install gas and electric services for new subdivisions. He works closely with developers, engineers, contractors and our Company’s crews to get the job done.

Carl relishes the opportunity to help others, at and away from work. He finds being on the VFD to be a rewarding experience. “A lady came up to me at National Night Out and told me ‘thank you.’ She said I had helped her when she was in a car accident a few months back.”

When he and his team of Lone Oak firefighters aren’t responding to emergency calls, Carl assists the East Central FFA by washing out their agricultural barn before stock shows, and he shares fire prevention information at the elementary school.

As we commemorate National Fire Prevention week, he reminds folks to change out their smoke detector and carbon monoxide detector batteries. He also reminds parents with small children to practice fire drills. When doing these drills, Carl says, parents should instruct their kids to get out of the burning structure – not hide – and go to a meeting place. Check out this video by the U.S. Fire Administration for more information on planning ahead for a fire emergency.

UNPLUGGED: Putting the past to paper

UNPLUGGED: Goode has a thing about trains