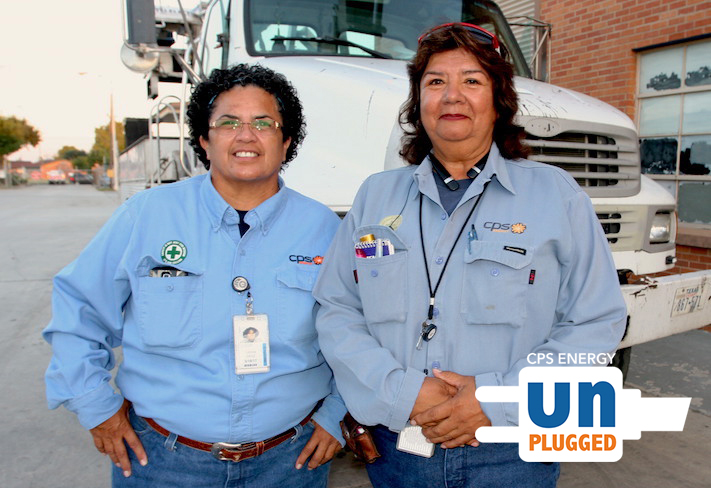 They are two of CPS Energy’s eight-woman field work force.  This Labor Day, we would like to spotlight a couple of folks in non-traditional roles at CPS Energy.  Both are 20-year plus employees who have worked alongside their male counterparts in the hot sun, pouring rain, freezing winds and darkest of night.  Letty Ortiz is a utility crew foreman in our Underground Electric Distribution Department (UED).  Bertha is an overhead maintenance operator.

Sitting down with Letty during her lunch break was fun. She has a big smile and a quick laugh that sets you right at ease. Letty started at CPS Energy 23 years ago as a service worker. She’s been in construction since she graduated high school in 1980.

“I was looking for jobs in the paper and I came across an ad for a free class sponsored by Texas A&M called Highway Construction for Women,” she says. Three hundred women showed up but they started dropping like flies. I was one of the few that finished the course.”

That class began a life-long career in non-traditional construction roles.

Letty worked on the I-35 overpass at Rittiman Rd. placing the decorative embankment walls. She worked alongside her father who was a cement finisher on that project.  She went to the downtown Tri-Party project after the highway job was complete. It was Tri-Party that led her to work alongside CPS Energy crews. Several of our foremen noticed Letty’s hustle and encouraged her to apply. She started in what, at the time, was called the Service Crew. Think every manual labor job an electric and gas utility encompasses – the Service Crew’s function was to perform all of those jobs. Letty did everything from hand digging and back filling, to trenching and rock cutting.  “We would do all the hard work and they (underground hook up crews) would come and do the easy work,” she says with a big laugh.

Letty progressed from a general trainee to equipment operator to foreman in just 10 years.  She says she faced very few challenges as a woman in the field.  It was a different story as foreman.

“Once I became a foreman there were some guys who right away said, ‘Whoa, a woman is gonna tell me what to do?,’” Letty recalls.  But she says it wasn’t anything she couldn’t handle.

It helped that as a service worker and operator, Letty worked just as hard as the men. She never asked for special consideration and was often the point person on projects. She says as a foreman she continues to work alongside her crews, and did so even back at a time when a foreman working alongside crews was not the standard practice.

It’s that work ethic which sums up her work philosophy,

“Leading is all about communication and working with your team,” she says. “If your guys see that you are working just like they are, believe me, they’ll respect you and bend over backwards for you.”

I’m sure her smile helps.

I met Birdy at a job site just south of downtown on a 95-degree day.  An 18-wheeler had hit a pole at 4 a.m. and knocked it over.  Her crew was on site to relieve the overnight crew and to replace the downed pole, three transformers and wires. Birdy was on site to operate the Pole Setter Boom Truck. – a huge 10-wheeled vehicle with a hydraulic crane.  Birdy was there to hang the new transformers on the pole.

Birdy’s lunch break interview was on an industrial dock about a hundred yards from the site. Birdy greeted me with a smile and an easy demeanor, leaning against the shaded dock, waiting for my questions.

My first surprise was that Birdy also came to CPS Energy after attending a continuing education course at St. Phillip’s College.  She was a self-described housewife remodeling her home and she needed to learn how to rewire it. After the course, she rewired her house. That success led to Birdy’s husband suggesting she apply at CPS Energy. She just hit her 26th year this August. She’s been in Overhead Maintenance for 23 of those years and was Overhead’s first female employee.

The first three years Birdy was a utility worker in the Gas Department. She worked on a main gas line install crew.

“My first day, the low person on the crew had to jackhammer,” Birdy remembers. “I couldn’t even stand up the jackhammer.  About two months later, I was able to carry the jackhammer on one arm and the two hoses on the other.”

Birdy says she had to prove her herself once she came to the electric side as a helper. While she says her coworkers were always ready to help her carry the heavy stuff, it wasn’t until she became an operator that she felt accepted.

“Everybody that would come into the electric side as a helper would stay a year or two and they would move out,” she says.  “I was a helper for five years.  And then I became an operator, so I guess I proved myself that I was going to stay around.”

Along with the Pole Setter, Birdy also operates Bobcats, the large Digger Derrick, and the Mini Digger Derrick EZ-Hauler.  Birdy drives all of our commercial vehicles and is an instructor in our commercial driver’s license course (she says she gets a lot of thumbs up from fellow motorists).

I asked Birdy to sum up her 26 years with the company:

“I like my job. I haven’t had any problems with the guys disrespecting me,” Birdy says. “They’re real good guys to work with. I’m one of the first ones to volunteer for call duty. I always answer when they call for extra people.”

These two hard working women symbolize CPS Energy’s commitment to our customers and each other every day of the year.