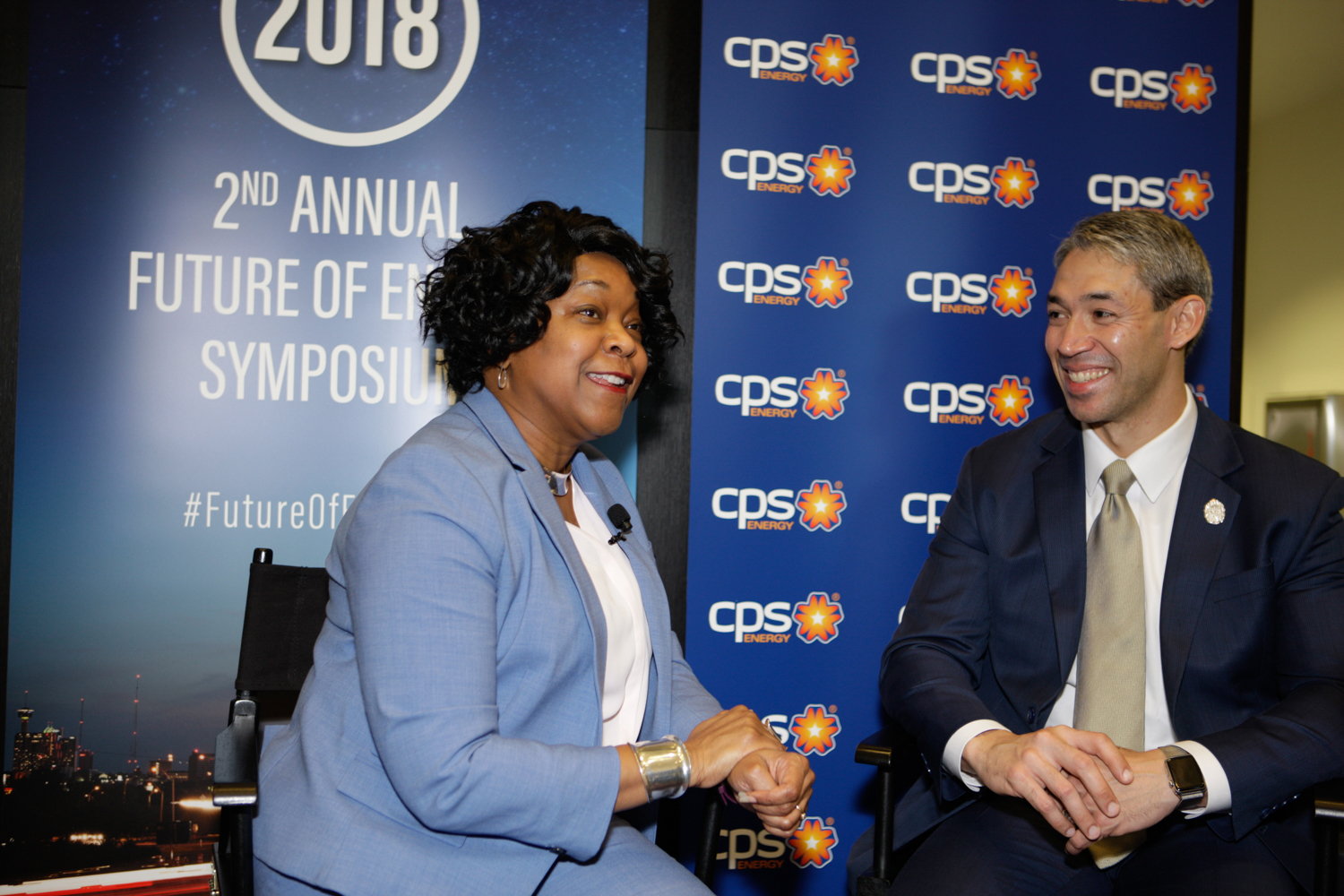 While technology continues to change at a pace quicker than the leader in an Indy 500 race, the energy industry has to keep up to remain relevant. CPS Energy’s second annual Future of Energy Symposium brought together thought leaders from around the world for engaging conversations on key topics such as using data to meet customers’ needs and expectations, protecting data and tying smart grids to smart city initiatives.

The utility’s President & CEO Paula Gold-Williams was first in the driver’s seat and led with a short update about CPS Energy’s progress to stay up to date with industry changes. “Energy technology is coming on strong,” she said. “We are all over renewables; we are upgrading and improving existing plants; we have new investments on the gas delivery side as well as on the generation side, and the list goes on.”

Paula was later joined on stage by San Antonio Mayor Ron Nirenberg, who spoke of our community’s growth – which is expected to double in size over the next 25 years – and the need for a strong quality of life, strong financials, and strong energy and natural resources management.

Mayor Nirenberg then shifted gears as he shared insight into what he sees are a couple of present challenges, both of which CPS Energy is already pressing forward on. One challenge, he noted, is the technological revolution. The way we use energy, manage and store energy, use data and go about our daily lives continues to evolve, so we have to find ways to integrate these things with the long-term strategy of CPS Energy, he said. The second challenge he spoke of is protecting the data and infrastructure we have today.

Dr. Massoud Amin, a University of Minnesota professor, shared similar thoughts as he spoke to the audience about powering progress and the quality of life for the customer, saying that it’s about “giving them the security, the privacy and the quality of services at an affordable cost and with zero or minimal footprint.”

He later spoke of the energy transition – the slow but steady interface of the smart grid and microgrids – and the drivers behind this transition: standards and policies, self-healing grids, big data analytics, smart cities and homes, as well as the melding of information technology and operational technology.

Aside from smart technology and smart cities, the need to secure infrastructure and data was another topic that continued to surface during the conference. Ofir Hason, CEO and co-founder of CyberGym and who served seven years as a senior manager in Israel’s National Information Security Authority, stated that companies “have to be able to predict the next one, two, three moves of the bad guys or hackers.” When asked if there’s a way for a company to eradicate all cyber threats, he answered “no,” and added that there are three factors company’s must leverage to minimize risks and build strategies:

Taking it outside the box

As the checkered flag was waved and the event was coming to a close, Paula noted that we have the ability in the energy industry not to be confined to the way we’ve done things for a hundred years. “I think one of the biggest things – whether you’re in school now, a professional or a person who just values being in San Antonio – is really trying to find that nexus of unleashing people to create more innovation, more precision, more inclusiveness. When you’ve done something for a hundred years, taking it outside the box is huge, monumental.”

While there is no finish line or ceremonious victory lap in the energy industry, CPS Energy wants to make sure it’s making the right moves to stay ahead of the curve to better serve the customers and community of Greater San Antonio.

Immediately following the Symposium, Global law firm, Dentons, announced that Paula Gold-Williams has been named to serve as the Energy industry co-chair for Dentons Smart Cities/Communities Think Tank. She will co-chair the Energy Pillar along with former Secretary of Energy Dr. Ernest Moniz.

Click here to watch the 2018 Future of Energy Symposium.