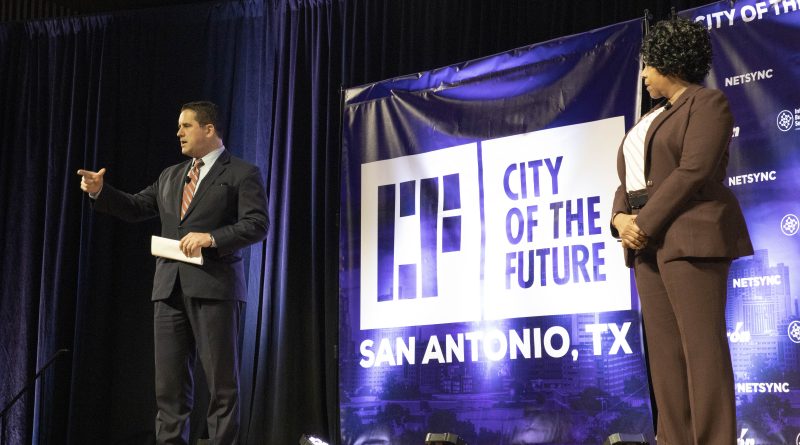 As the second annual City of the Future conference has just concluded here in San Antonio, CPS Energy is continuing to look forward to the future of smart cities. The two-day conference, hosted by CPS Energy and Zpryme, featured experts and leaders from across the nation engaging in dialogue that inspires communities, people and companies to create actionable smart city partnerships.

CPS Energy President & CEO, Paula Gold-Williams opened the conference with a keynote on the transformation of San Antonio into a smart city and how CPS Energy is changing with it. She discussed the challenges of transitioning into being a smart city without losing the character and rich history San Antonio has.

“How do you take a city that been around for over 300 years and convert it to a super smart city?,” said Paula, as she opened her keynote on Monday, February 24. “It’s one thing to think about change in smart cities and where we are going to go and what we are going to create. It’s another thing to think about how you evolve from where you are to where you want to be while keeping the history and tradition of this community.”

Following her keynote, Paula engaged in a discussion with City of San Antonio’s City Manager, Erik Walsh on the model of day-to-day transformations and how CPS Energy’s partnership with the City has making San Antonio a smart city at the top of their to-do list.

The duo spoke to the recent three “innovation zones” that city partners, including CPS Energy, have designated within the City of San Antonio. These areas include the Medical Center, Brooks City Base and the Downtown area.

“We wanted to look at different areas of the city, all which have different characteristics, in order to solicit community feedback and engagement before we solution build,” said San Antonio City Manager, Erik Walsh.

Paula has big plans for the potential of these designated zones. “We want to take the things we explore in these innovation zones and take them to scale,” Paula said during her and Walsh’s discussion. “We want to give our city the opportunity to think globally and act locally.”

Along with thought provoking panels on topics such as the future of transportation, economic and workforce development, resilience in the digital age and much more, the conference boasted an Electric Vehicle (EV) showcase from Tesla, Jaguar, Audi and Nissan as well as engaging demonstrations from other City of the Future sponsors.

As the conference closed, one thing remained apparent in the effort among individuals and organizations who work towards building smarter cities. In order to build a smart city of the future, cities must be designed around the people and communities that live within them. CPS Energy’s People First approach is the foundation that drives the work we are doing towards making San Antonio a smart city and our inspiration in paving the way for other cities to follow.