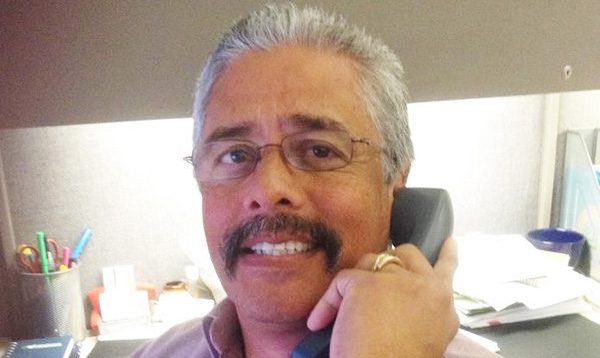 During the early days of his CPS Energy career, Nick Arellano worked on mainframe computers that were as big as a refrigerator and stored data on disks the size of vinyl records. The hum and loud buzzes of mainframes, green screen computers and printers with large rolls of perforated paper filled his work space. Today, a device that fits in the palm of Nick’s hand can do more than a room full of old tech.

“It blows my mind that a cell phone can do a lot more than one of those big mainframes,” said Nick, Production & Monitoring Control Administrator.

Nick is our most tenured active employee with 42 years of service. During that time, he’s seen our company grow and change with our community and keep pace with constant changes in technology. Since he started in 1978, a lot of manual processes have become automated.

One of his first roles involved manually punching in cards to the main frames that meter readers would fill out by hand while working their daily routes. Every night, Nick’s team spent several hours feeding the cards into the mainframes to process the data for customer billing. Today, the data is collected and processed instantly via our smart grid technology. Completed in 2018, the smart grid allows automated, two-way communication between customers’ meters and CPS Energy. The major upgrade to our electrical grid has helped us keep pace with the 21st century demands now being placed on it.

Nick is proud to be part of a utility company that not only serves customers and the community well, but does an excellent job keeping pace with the constant changes in technology.

“Everything is going so fast that you really have to keep up with new technology,” said Nick. “The technology is always changing and evolving so I’m constantly learning new techniques and methods with the different technologies we’re using. It keeps my mind going and I really enjoy the challenge!”

For a good portion of his career, Nick has acted as a watchman over our networks, monitoring our business-critical servers and infrastructure to make sure they’re operating correctly. His team considers him a Subject Matter Expert (SME) for an application which enables his team to monitor networks across the company to ensure they’re operating at peak performance. Over the years, he’s worked with his team on major upgrades and projects, including a transition to SAP software in 2001.

“The technology that seems automated for everybody else still requires a manual effort from IT professionals to implement it,” said Nick. “You have all your SMEs for Windows, Unix and other systems. As a group, it takes a whole team effort to be able to accomplish everything.”

In a fast-paced environment, Nick has been known to keep his cool even when the pressure is on.

Clara Pettit, IT Process Analyst, who has worked closely with Nick over her 34 years of service, recalls an upgrade project that caused some major issues. Clara and Nick worked with the vendor/consultant all day to resolve the problem. However, everything that could go wrong went wrong and made it difficult to troubleshoot the issue. Clara went home that evening, but Nick stayed with the vendor to continue working overnight.

“I came in early the next morning only to find that Nick and the consultant were still in the same clothes and working diligently,” said Clara. “Nick had figured out the problem and was working with the vendor/consultant to fix it. The consultant was flustered and stressed but Nick remained calm and thought outside the box to fix the issues that caused the problem. That is only one of many examples. Nick is one the smartest and considerate people I know. He is always willing to jump in and help where he can.”

Nick is grateful for the opportunity to have established a long career with a company that invests in him. In 2006, he took advantage of our tuition reimbursement program to get his bachelor’s degree in computer science.

Nick is now passing on his knowledge to his fellow team members. Nick’s boss, Jessie Torres, EIT Service Desk Manager, said he’s currently training others on his team how to use programs and applications he uses to monitor our network.

“Nick’s experience and vast knowledge has led to opportunities for other employees to receive training on the tools he supports,” said Jessie. “His tenure with the company is a prime example of an engaged employee. He goes out of his way to help anyone in need.”

CPS Energy has a rich history of employees like Nick with long, rewarding careers. Currently, more than 340 of our 3,100 employees have 30+ years of service. In recognition of our 78th anniversary as a municipally owned company this Saturday, Oct. 24, we send them a special shout-out and thank them for their dedicated service centered on putting People First!