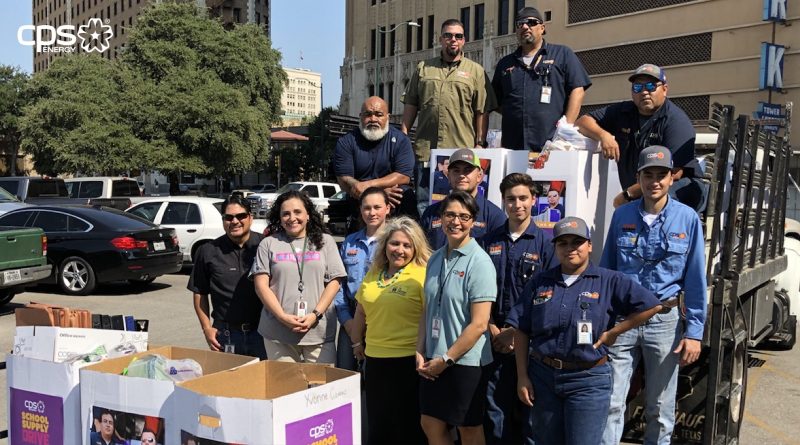 They came with oodles of notebooks, pads and pens – boxes of school supplies donated by CPS Energy friends. Colorful pencils and crayons would bring imagination and smiles. There were binders and backpacks with various styles. To help spread the word, executives rushed to the store. Team members answered with glue sticks, markers and more. Employees happily gave two tons of these valuable tools, so kids in San Antonio would be ready for school.

It was poetry in motion! CPS Energy employees and interns donated more than two tons of school supplies and more than $900 for Stuff the Bus. Communities in Schools – San Antonio’s (CIS-SA) annual school supply drive brings residents and businesses together in our community to equip students with everything they need to start the school year. The donated supplies not only equip students, but they also shoulder the burden of back-to-school costs for teachers and families.

Our workforce of more than 3,100 employees and 74 interns from power plants, service centers and various facilities throughout our community filled up donation boxes with supplies during the 5-week campaign. But it was some of the out-of-the-box ideas that kicked the campaign into high gear.

Executive Sponsors Rudy Garza and Zandra Pulis worked with our Corporate Communications & Marketing team to make a fun video of a shopping spree to purchase supplies. The executives sent out a message companywide calling all employees to head to the store to help break the previous record of 3,000+ lbs. (1.5 tons).

Our interns played a big part in encouraging employees to donate, too. Anthony Coronado, an intern with our Right-of-Way Management team, put a creative twist on the annual drive.

“I came across a few empty donation boxes on my (office) floor and decided to recruit some enthusiastic people to help me out,” said Anthony.

Anthony, who is working on becoming an Eagle Scout, loves leading others and overcoming a challenge with his Boy Scout troop. He decided to take on the challenge of making those empty boxes overflow. Anthony split the floor into four teams, recruited team leaders and developed a friendly competition to see who could collect the most supplies. Team Orange, which included employees of our Facilities Management Center, won the prize – a pizza party – by contributing more than 800 school supplies.

“We have a lot of folks willing to give, but the competition was an everyday reminder that really spurred on my team of super-givers,” said Dave Nava, Supervisor of the Facilities Management Center. “The end prize was really not the motivating factor. Giving for a good cause and having a little twist on the annual drive made it more real and motivated us to give. Hats off to Anthony for thinking outside the box… literally!”

Last week, team members and interns filled up a delivery truck and suburban full of supplies, and delivered them to the San Antonio Food Bank for the final weigh-in. Members of Fleet Management, Energy Delivery Services and Corporate Responsibility teams offloaded the supplies and trucked them to the scale. Soon, the team had the final record-breaking number – 4,720 lbs. Employees and interns celebrated the success with some high fives, a final group photo and by firing off text blasts to share the news.

A shout-out to the employees and interns who cheerfully donated and those who came up with those fun out-of-the box ideas to promote the annual drive. Perhaps some students who benefit from Stuff the Bus this year will change the world someday by thinking outside the box.