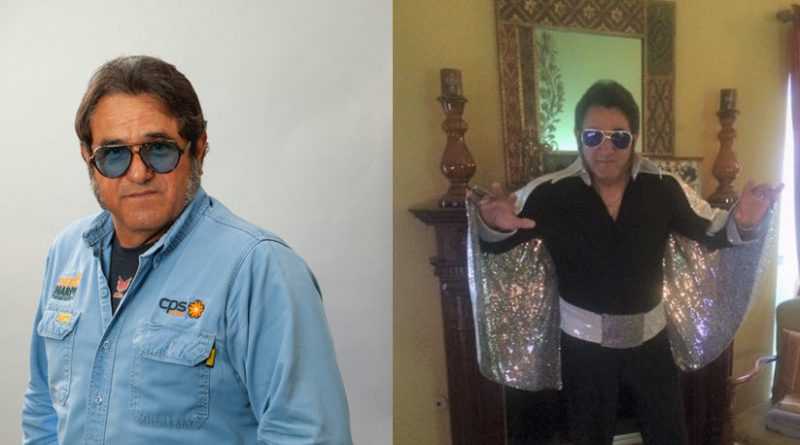 Andrew walked into the room, the first thing I noticed were his dark sunglasses. Then, his sideburns followed by his charismatic persona. When he stretched out his right hand, I could tell right away the man I was meeting was no stranger to shaking hands and meeting people.

August 9-17 is recognized nationally as Elvis Week. A celebration of the music, movies and legacy of Elvis Presley. At CPS Energy, we typically don’t recognize Elvis Week. However, I recently learned that we have our very own Elvis Impersonator, and I couldn’t resist writing this article to tell you about a man who presents himself as “the King” to put a smile on people’s faces.

As I sat across from him to ask about his “Elvis” life, I quickly realized I didn’t have to ask him any questions. Instead, he began the conversation with an eagerness and excitement I likened to a young child talking about his first day at school. He began by telling me about his early life and admiration for a man known as the King of Rock and Roll and who he later came to idolize.

A graduate of Brackenridge High School, Andrew grew up right here in San Antonio living in the King William area his entire childhood. When he was old enough, he attempted to join the military, but he was medically disqualified. Wanting to follow in his idol’s (Elvis) footsteps, he was disappointed that his life’s path would not include serving his country.

As a child, Andrew was quickly drawn to “the King’s” voice and enjoyed his music. But it wasn’t until 1998 that he first dressed up as Elvis. Encouraged by his family, he greeted trick-or-treater’s that Halloween by wearing a glamourous outfit made by his wife Hilda. The attention he received from children and their parents left a lasting impression on him. He felt like dressing as Elvis was something he could get used to doing. Years later, his granddaughter, Aysia, convinced him to dress up as Elvis and attend anime conventions with her.

Andrew started his career with CPS Energy in 2000 and now works in our underground construction area as a utility truck driver.  He tells me he enjoys his interactions with the public and understands that he is here to serve them the best way he can as part of his daily work.

In 2010, the process of breaking free from his shyness and presenting himself in public as Elvis began. He recalls a time he was in Las Vegas in his everyday clothes and a gentleman approached him and asked if he had a chapel where he could exchange vows with his fiancé. Andrew tells me, “He came up to me and asks, ‘excuse me, do you impersonate Elvis, and do you marry people?’ I said no, I don’t think so.” Soon, Andrew and his wife came across a chapel. As they peeked inside, they saw a gentleman dressed as Elvis conducting a wedding ceremony. This prompted a thought for Andrew that he hopes someday will come to fruition – more on this later in this blog.

For Andrew, wearing his homemade Elvis costume and taking photos with strangers is something he embraces. He speaks with passion about what he does and he really enjoys it. This kind-hearted soul walks around Downtown San Antonio on occasion as “the King” simply to put a smile on the faces of those who meet him. He doesn’t charge for his time or allow people to pay him a cent when they ask for a picture. Instead, the joy he feels for what he does is payment enough. Sometimes, it’s overwhelming, like the time he went to Graceland to visit the home of Elvis.

This past May Andrew was visiting his granddaughter who attends Pratt Institute in Brooklyn. Along with his wife, they all drove to Memphis. This was Andrew’s first time visiting the home of the man he grew to admire. He recounts his decision to visit the mansion wearing one of his Elvis outfits. As he toured the grounds, he was overwhelmed with the response he received from visitors asking to take a photo with him.

“Even the folks who worked there were asking me for pictures,” he says. It got to the point that he was missing all the important details the tour guide was sharing. He decided to go back to his hotel and change into his regular clothes. When he got back, employees at Graceland asked him why he changed clothes. They had been waiting for their opportunity to take a photo with him.

He has donned the outfit many times. However, participating in the King William Parade has been one of the highlights of his Elvis career. Not because it was held in the neighborhood he grew up in, but because it was to honor his mother. Andrew tells me about the last four years of his life and how tragedy has repeated itself.

In 2016, his mother encouraged him to participate in the King William Parade, but Andrew was hesitant. His bashfulness kept him from participating. However, when his mother passed in January of 2019, he wanted be part of the parade as an honor to her.

As retirement from CPS Energy peeks its head over the horizon, Andrew knows that the next chapter of his life will start soon. He’d like to become an ordained minister. Remembering the “Elvis Minister” he saw in Vegas, he tells me, “that’s what I’d like to someday do.” His ambition to unify couples in marriage was born many years ago and it’s something he’s never forgotten. He has his eyes on a 1953 Cadillac that he’d like to use to chauffer newlyweds…dressed as Elvis of course.

I learned a lot about Andrew in the short time I spent with him. For a guy who wears a loud and glamourous outfit, he is really reserved and shy. The obvious questions are, why does he do it? Why does he step out of his comfort zone and do something that makes him nervous?

Bottom line: it’s because he has seen the joy dressing as Elvis brings to people.  It’s a feeling of pride, to be responsible for putting a smile on someone’s face, he tells me. After interviewing Andrew for nearly an hour, I can honestly say I couldn’t help but smile as he left the room. Not only did I meet “Elvis”, I met a great coworker and most importantly a humble and likeable person.