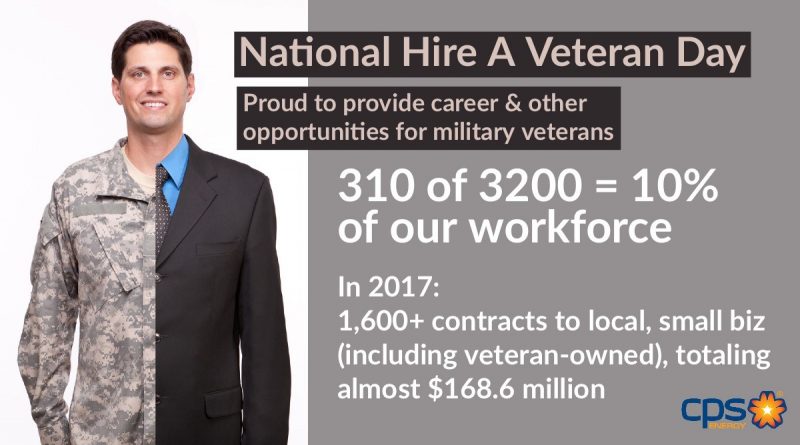 As a community partner in Military City USA, we proudly commemorate National Hire a Veteran Day. Our utility understands what it means to serve others, and on many fronts we support those who’ve served our great nation and help them succeed.

Providing rewarding careers with our utility
We partner with several organizations, military installations such as Joint Base San Antonio (JBSA), and the Uniformed Service Program (USP) in our city to promote career opportunities at our utility for those who have left, or are about to leave, the military.

About 310 of our nearly 3,200 team members are veterans. These former men and women in uniform now serve our utility in all sorts of roles – journeyman lineman, scheduler, engineering associate, director of Finance and senior vice president of Commercial Operations, to name a few.

We also support our employees serving in the Reserves, such as Navy Reservist Seamus Nelson who’s an Employee Development Analyst in People & Culture. In appreciation for that unwavering support of his reserve duty, Seamus nominated his manager for a Patriot Award that recognizes those who support citizen warriors in various ways such as granting leaves of absence. Manager of Employee Development Jeff Juarez was presented with the award earlier this month by the Employer Support of the Guard and Reserve (ESGR).

“In a lot of respects, CPS Energy and the military share some of the same values – hard work, commitment and integrity,” said James Carter, Manager of Talent Acquisition at CPS Energy who served five years in the U.S. Army.

He stated that while its’s important to support our active duty service members, we also “have to find ways to help veterans transition and acclimate to their civilian careers afterwards.”

Roughly 550 U.S. veterans transition out of the military each day. That’s more than 200,000 veterans returning to civilian life each year, according to the military’s Transition Assistance Program (TAP).

The transition, for many like James, can be challenging. “I separated from Germany before moving back to the states and upon arriving found the job search daunting. I especially found it difficult to translate the work I had done in the military into civilian jobs.”

In part, it was his personal experience that led James to partner with JBSA and help launch a Career Skills Program at our utility.

This program provides active duty personnel who are within one year of separating from the military an opportunity to gain civilian work experience, network, learn about the corporate environment, and potentially gain employment directly with the host employer or through networking channels.

Ret. Col. Richard “Flip” Wilson participated in our program from April through June of this year – the last three months of his more than 31-year Army career before retiring July 1 – to gain civilian work experience and new skillsets in preparing for a second career. At CPS Energy, he worked alongside team members in our Gas Delivery area where he shadowed team members and learned about the many facets of the gas and electric industry.

“This program provided me a great opportunity to turn my military skills and experience into post-service skillsets that are invaluable in civilian companies. I gained firsthand working knowledge of the gas and electric business units within the transforming utility industry,” said the retired colonel. “Any company offering a program like this is truly supporting the transition of a service member. Companies like CPS Energy essentially help service members close the gap between military service and civilian career.”

Helping veteran business owners succeed
Some of those who transition out of the military choose to start their own businesses, and we’re there to help them, too. Our Supply Chain Business Administration team makes it easy for small businesses to do business with us. These team members attend and participate in Chamber and networking events and panel discussions, and meet one on one with local business owners.

“Small businesses, including those that are veteran-owned, constitute a major force in the U.S. economy. They contribute to the growth and vitality of economic development by creating jobs, sparking innovation and achieving financial success and independence,” said Robert Gourley, Director of Supply Chain. “They also complement the economic activity of large organizations such as ours by providing components, services and distribution of products.”

In 2017, we awarded more than 1,600 contracts totaling almost $168.6 million to local small businesses, including veteran-owned companies.

************************
According to the U.S. Department of Veterans Affairs, military personnel are often cross-trained in multiple skills and have experience in varied tasks and responsibilities. Many veterans have learned what it means to put in a hard day’s work. They have also come to appreciate the challenges and satisfaction of a job well done.

Here are other strengths the department noted that veterans can bring to the workplace:

One thought on “Supporting veterans through valuable career and contract opportunities”