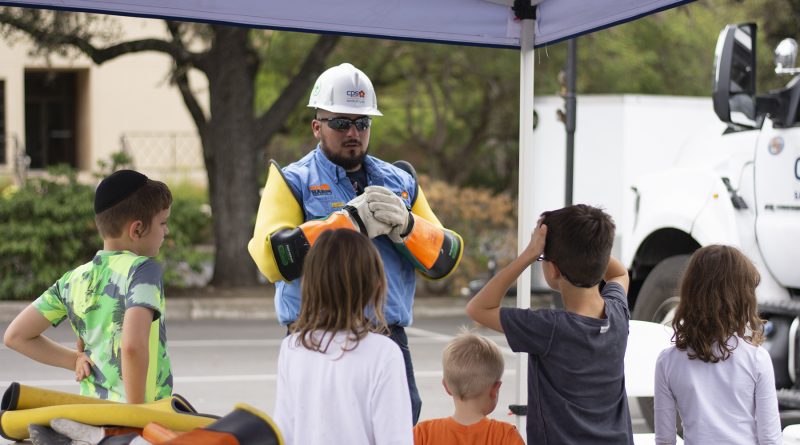 Michael cupped his hands above his eyes and intently watched the CPS Energy lineman maneuvering the white fiberglass bucket 50 feet overhead. Kids standing next to Michael yelled with excitement, “Look how high he is!” But the 12-year-old remained silent, simply looking with interest. Near the truck, 7-year-old Tyler tried on personal protective equipment and learned about the extensive training our linemen go through to work safely around 19,000 volts of electricity.

Kevin Beavers, a Distribution Apprentice, and Art Gonzales, a Distribution Trainee, work on our overhead line crews to make sure safe, reliable electricity powers homes and businesses. Along with working long hours and braving the elements to keep lights on in our community, they’re glad to connect with some of our youngest customers to talk about their rewarding careers. Last Saturday, the pair took part in Texas Public Radio’s “When I Grow Up” event at the San Antonio Garden Center. About 150 kids of all ages got a chance to learn from local companies about potential career paths before heading back to school.

To better show the equipment they work with, Kevin and Art built an interactive education station to give kids a close look at some of the infrastructure CPS Energy uses to deliver electricity to homes. Kevin showed 11-year-old Izabella and her 4-year-old brother, Vincent, what linemen do to switch the power back on from the ground when there’s an outage. He then explained how the transformer steps down electricity from 19,000 volts to 120 volts, so it can safely be delivered to a home. Kids also learned how a fuse cut-out protects a transformer from being overloaded when a tree limb or animal comes in contact with power lines. The fuse trips and the switch on the cut-out swings open to cut off the connection to the transformer.

Izabella and Vincent took turns using an 8-foot high voltage hot stick to put the switch on the cut-out back into place. Before doing so, the siblings yelled out, “The line is hot!” Our linemen yell this to warn their crew to steer clear of equipment before re-energizing it.

Kevin admits he initially didn’t want to work around electricity when he was hired by the utility as a temporary employee. After just a few weeks on the job and seeing linemen scaling poles to restore power, he changed his mind. Fast-forward 11 years. Kevin is now participating in our three-year apprenticeship program and after completing 6,000 hours of training will graduate to journeyman.

Art found inspiration early on from his dad who retired from CPS Energy as a journeyman a few years ago. Despite having a family connection, Art literally had to work in the trenches to move up. As a temporary trainee, he helped dig trenches to install underground utility lines. He kept applying for a distribution trainee position and finally landed a spot.

At the event, Art and Kevin talked in length about safety and urged the kids to always stay away from downed power lines. Kevin kneeled before Vincent and Izabella and made them pinky promise to never approach a downed power line. He told them to instead warn their friends and tell an adult to call CPS Energy.

“Safety isn’t our goal,” said Kevin. “It’s our job. A lot of people call it a dangerous job, but I’d call it hazardous. The job becomes dangerous if you don’t follow the rules.”

Just before wrapping up for the day, Art talked to Tyler about the training our linemen go through during their career. Tyler listened intently and smiled. When asked if he was interested in becoming a lineman when he grows up, he nodded and said, “Yeah, I think I could do that.”