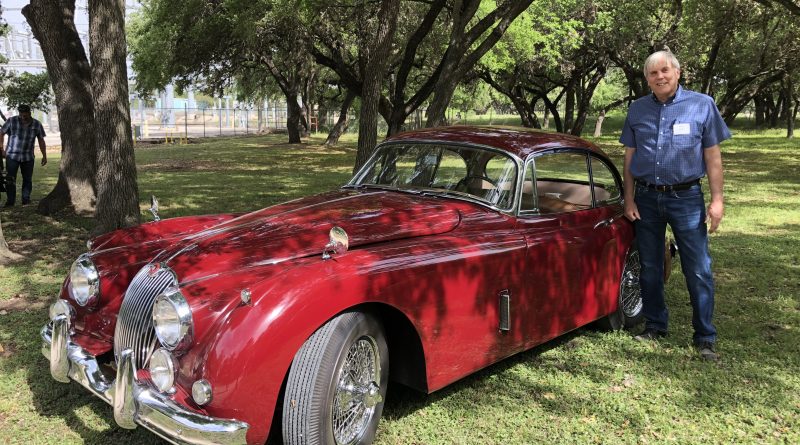 What do a 1961 Jaguar XK 150, a 1941 GMC half-ton pickup truck and a self-proclaimed “clown car” have in common? They’re all owned by CPS Energy retirees and were recently shown off at their annual retiree car show and meeting in April.

In total, about a dozen classic cars were on display at the CPS Energy employee park off Perrin Beitel Road on that sunny afternoon. Attendees oohed and aahed at each retro beauty, some of which looked like they had come straight off a movie set. Count Don Snyder’s Jaguar among those.

Don was happy to explain everything about his Jag, from the pristine hood to the throwback interior. He welcomed onlookers to sit in the driver’s seat and happily snapped pictures of them on their phones. After all, this is Don’s favorite retiree event of the year.

“This event is high on my list,” Don said. “I always enjoy seeing these cars. I go to all the events, but it doesn’t get much better than this. When I walk around downtown, I very seldom see anyone I recognize or know. Most of them come out to these events, so I enjoy seeing them.”

Daniel Altmeyer, owner of the ’41 GMC, also loves the event because it gives him social opportunities that can sometimes be hard to come by.

“When my wife died, my kids were saying ‘You need to do something,’” said Daniel, who worked in CPS Energy’s power plants for 34 years. “They talked me into going to a car show in Austin and I just fell in love with this truck. People will come by and take pictures of the car all the time, and when they come up and ask me questions about it, I know the answers and love talking to them.”

“Back then, nobody would give you a good job until you had completed your armed service,” Daniel said. “So I went into the Army, and when I got out, I started putting in at City Public Service and I’d go down there every two weeks to renew my application. They told me, ‘Sir, your application is good for 60 days. You don’t need to come in here anymore.’ So I said, ‘If you don’t want to see me every two weeks, then hire me.’”

Hiring people was Chalmers Gable’s specialty as a human resources employee at CPS Energy for 27 years. Chalmers, who referred to his 1958 Nash Metropolitan on display as a “clown car,” runs a classic car business with his wife. He loves bringing his latest ride to this show each year.

“I enjoy seeing people that I worked with and about the only place I see them is out here at the park,” Chalmers said. “This one is usually my favorite because we bring the cars. There’s a certain amount of bonding and family-oriented things that go on.”

That’s the goal of events like this one, said current CPS Energy employee Karen Sanders, who acts as company liaison to the CPS Energy Retiree Association.

“The retirees meet four times per year,” said Karen. “They love the communication with the company and the car show gives them a chance to see the hobbies of their friends. The retirees are the foundation of our company and they built the reputation and strength we are known for.”

CPS Energy has 1,231 active members in the association. This strong group of supporters will continue to meet multiple times each year to catch up, have fun and help out in the community.