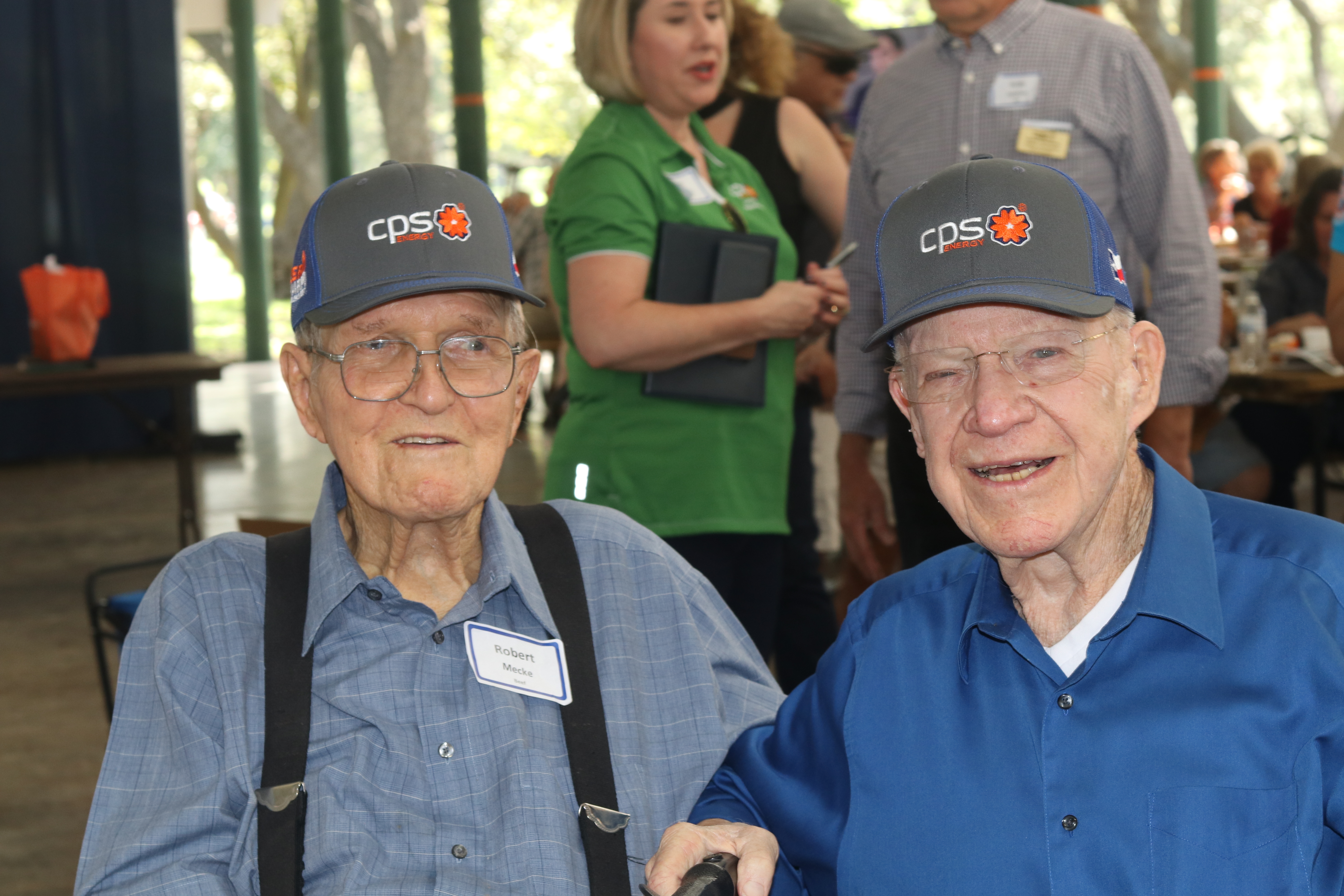 Bob and Jim speak with enthusiasm and pride about our Company’s early days as a community-owned utility. Both started their careers in the 1950s when we rapidly began expanding our gas and electric system to meet the energy demands of our growing community. With plans on the horizon to build new power plants and infrastructure, the Company was in need of talented, hard-working employees to facilitate growth.

“We started out in the cadet program and they had us work at every department in the Company,” said Bob. “We had a lot of fun learning various jobs in the field and got a chance to operate heavy equipment and drive different vehicles. It was really a great experience.”

As our Company grew, so did their careers. Bob Mecke, our oldest living retiree, served in various leadership roles during his 33-year career. He helped install the 400-foot communication tower at Jones Avenue, worked with a team to resolve a major blackout in 1977, and was instrumental in organizing the Underground Residential Distribution section. Jim Pettinos, who retired in 1992 as Manager of Construction, oversaw important improvements to our electric system, which helped us become a strong, reliable utility.

“It’s truly a wonderful place to work,” said Jim, who enjoyed a 42-year career. “I’m just grateful I had the opportunity to work here.”

Big changes over the years

Jim said one of the biggest improvements he’s seen at the Company is a stronger focus on safety. In his final management position, Jim was tasked with enhancing the safety culture. He made sure crews had the best equipment possible to do jobs safely and encouraged employees to watch each other’s backs. Decades later, he’s happy to see our strong focus on ZERO HARM THROUGH SAFETY helping employees get home safely to their families at the end of the day.

“What a wonderful improvement we’ve made with safety,” said Jim. “When I started, three linemen would die every summer. It was very tragic and we really had to change things. Today, employees are talking about safety every day, buying better equipment, and doing a great job looking out for each other. I am truly impressed with that.”

Bob said renewable energy has been one of the biggest changes he’s seen at the Company. He pointed out that reliability and cost are always an issue with renewables, but they are an important part of the equation.

“Renewables are a good supplement for power generation,” said the 94-year-old retiree. “The sun doesn’t always shine and the wind doesn’t always blow, so you still need other fuels. In the future, I think energy storage will be the way to go. At that point, I think you could put in a lot more solar and wind.”

Our Company continues to lead the state in solar power generation, and we are among the top wind energy buyers in the nation for municipally-owned utilities. Our renewable energy portfolio consists of more than 500 megawatts (MW), one gigawatt of wind power, and 14 MW of landfill gas. We also have several battery storage projects that are helping us study and analyze the technology for possible future use on a larger scale.

Jim and Bob say they’ve been glad to see improvements in technology result in quicker response times for outages. Bob said during his career they depended solely on customers calling in to report outages. The process to restore power could take 2 to 3 hours or even longer.

“We would wait to get calls and accumulate addresses to develop (work orders) for areas affected by outages and send crews to restore power,” said Bob. “We also didn’t have crews available around the clock like we do now.”

Today, customers experiencing an outage can expect to receive an Energy Alert – a call or email from us, letting them know when we expect to restore service to their area. Average response times for outages are about an hour. Check out this video to learn more.

The prominent retirees received a lot of attention at a special retiree association meeting with more than 600 members present. Both are proud of the work they accomplished through the years, but are quick to point out that good employees were a big part of their success.

“In management, you only look good if you have a lot of good people working for you,” said Bob. “We had plenty of employees throughout the company who were willing to work hard every day.”

Retiree Robert Costello, one of Bob’s former employees, was glad to return the compliment.

“He was the best boss I ever had,” said Robert. “He was always willing to listen to us and never asked us to do anything we couldn’t do.”

As we commemorate Careers in Energy Week and get ready to celebrate our 75th Anniversary on Oct. 24, we want to recognize and thank leaders like Bob and Jim who helped shape our Company’s legacy. Ed Kelley, our Board Chair, reflected on the importance of these leaders in his 75th Anniversary video.

“One of the things I think about a lot as chairman of the board is that I’m standing on the shoulders of some outstanding people who have worked at CPS Energy over the years,” said Ed. “They set a beautiful company in motion. I think our job, in today’s world as board of trustee members, is to keep that legacy going forward in the way it has been established over the years.”

Need some friendly energy advice? We can help!

CPS Energy serves as Heart of the Community at St. PJs

Employee tradition reels in a lifetime of memories for kids