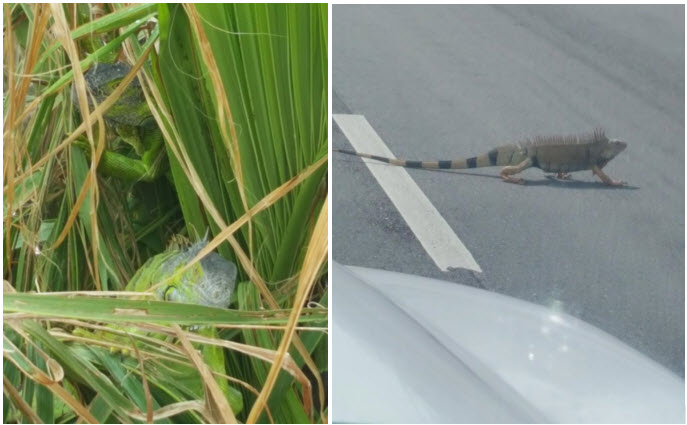 Two beady eyes surrounded by scaly skin peeked from a tree, watching Jeremy Green as he worked to return power to a home in the Florida Keys. Camouflaged perfectly with a buddy, the iguana wouldn’t be the first to cross paths with Green and other members of the CPS Energy team restoring electricity to Key West. At our Eastside Service District for the first time since he left 15 days earlier, Green said iguanas are as common in Florida as skunks are here in South Texas. He even captured a photo of one lazily crossing the road in front of his truck.

Iguana sightings and deer that grow only about three-feet tall are among the things Green found interesting about the Keys. But wildlife isn’t the reason he wants to return to this part of Florida one day; it’s the people.

“They were really nice and so glad to have us there. One lady did a cartwheel after we finished work in her neighborhood. That was the best part, driving back by houses where we had just turned the power on,” said Green, who was part of a nearly 60-member team that restored power to 68,000 Keys Energy Services’ customers.

The father of three made his first storm recovery trip in 2004 after Hurricane Ivan. He and his wife remember it well because their now 13-year old daughter was just four days old when Jeremy got the call. He wasn’t sure about leaving the newborn. But he recalls, “When your wife says go help those people, you go.”

A lineman now for 12 years, these mutual aid trips have gotten easier for Green since his two oldest are in college and can help out at home.

Two of Federico Fernandez’ four children are much younger. But when their dad left, age couldn’t shield them from picking up the slack for two weeks. Federico, a digger truck driver, loves animals and has more than 40 at their farm. While he was gone, 13-year-old Jared and 12-year-old Noah took on afternoon feedings for horses, cows, pigs, sheep, chicken, roosters, cats, dogs and a new litter of Blue Heeler puppies.

Jared and Noah arrived at Eastside early on Saturday for the team’s return. Both had great stories to share with their dad. While he was helping Floridians get their lives back on track, Jared made three tackles in his second football game of the season. And Noah beat his personal best record in a cross-country run.

Their mom, Jennifer, missed her support system as she taxied the boys to their practices. But she’s ‘glad her husband got to experience his first restoration trip and help people.’

Jennifer and Green’s wife, Dawn, are most grateful for cell phones and being able to keep in touch with their husbands. Unlike the scaly onlookers in the Keys, they relied on technology to keep a loving eye on their absent second halves.

“Being able to FaceTime and see things on Facebook that people in Florida were writing – how grateful they were for the help – that made things much easier than it was 13 years ago,” said Dawn.