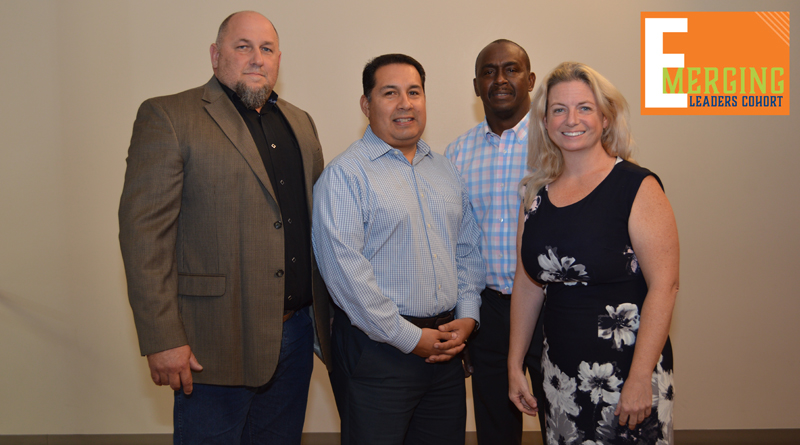 For the past nine months, the 16 team members participating in CPS Energy’s Emerging Leaders Cohort (ELC) program have been immersed in learning new things. The ELC is a professional development opportunity being piloted by our company. Since its launch, some of the participants shared with us what they learned about themselves, others spoke of how the mentoring aspect of the program is benefitting them, and some participants provided insight into how touring other parts of the company opened their eyes to what other areas do.

Today, we wrap up our blog series as we feature the four members of Team Megawatts 365. Following the program’s kickoff in March, the 16 ELC members were equally divided into four groups and came up with their own team names during a team-building exercise. Keep reading to find out how the program has helped Team Megawatts 365 members become better leaders.

Whether you’ve been with the company two months or 25 years, communicating is an essential part of leadership and day-to-day operations. Sometimes that means being able to listen and let the other person speak.

“Working with the 15 knowledgeable individuals in the program, I’ve learned that you really can derive a lot from opening your ears and closing your mouth,” said Ricci Schooler, an application administrator in Grid Support. “I’ve learned to stop and not voice my opinion immediately, to listen to the opinions of others.”

As an employee development analyst for our Driving Safe Team, Robert Doege also has a lot of interaction with other employees. He provides safe driving as well as commercial driver’s license training to employees. Robert credits the ELC program with helping him grow his people skills and shared that he’s already seeing positive results. “I’ve always been a shy type of person, and it’s actually brought me out more and given me better ability in my training,” he said, adding that he’s now able to better relate to and understand others.

Similarly, Percy Manrique says the program has helped refine his people and interpersonal skills. The plant engineer is listening more attentively to his colleagues to better understand their needs, and he’s speaking up more at meetings to spur good conversation and dialogue among team members.

Not only are the ELC participants realizing the benefits of the program, their colleagues are taking note too. Larry McHenry, a voltage support foreman, has been at CPS Energy for 32 years. While he’s well-versed in his role, Larry acknowledged that he wasn’t familiar with many of the aspects of decision-making and problem solving. “But since I’ve been in the class I’ve learned it well,” he said with a big grin. Because of the training he’s received, he’s better equipped to tackle tasks from start to finish in his daily work. “My co-workers now are like, ‘Wow, Larry, we don’t have to stop and take it back [to someone else]. We can solve the problem in the field.’”

Good luck to all of the ELC participants on presenting their capstone projects and on becoming future leaders!