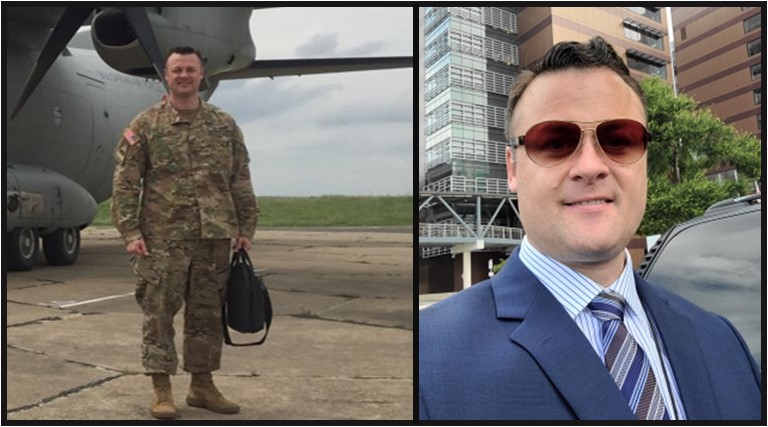 This Sunday, July 25, is National Hire a Veteran Day. Keep reading to learn about one veteran who hopes to soon be a part of the civilian workforce in the San Antonio area and the program that’s helping him make a successful transition.

Sitting at the dinner table with his father and four older brothers, a young impressionable Jerry Naylor got to hear all about their military experiences during those family mealtime chats. Jerry’s dad spoke of his time wearing the U.S. Army uniform while his older siblings chimed in about their service in the Army, Navy and Air Force.

Following in their military bootsteps, Jerry enlisted in the Texas Army National Guard in 1996 right after high school and also attended Texas A&M University where he received a Bachelor of Science degree. He later earned a Master of International Studies from North Carolina State University.

“I felt a strong sense of duty having been raised in a military family,” says Jerry.

After four years as a Reservist, he commissioned as a second lieutenant on active duty in the U.S. Army in 2000.

Jerry’s lengthy military career took him across the globe. He spent 11 years on overseas assignments in Germany, Korea and Italy, as well as two years in Iraq and one year in Afghanistan. His duties in the Army varied over the years. As an engineer, he operated bridging and construction vehicles. And upon his commissioning, he became an aviation officer and flew scout helicopters for several years, primarily in Germany and Iraq.

He also broadened and honed his interpersonal and communication skills, learning how to be an effective leader and teammate. Jerry has spent the last year assigned as a policy and plans strategist in ARNORTH at Joint Base San Antonio (JBSA)-Fort Sam Houston where he’ll complete his final military assignment in October.

Making the transition to civilian life

Major Jerry Naylor will hang up his Army combat uniform in November, rounding out 25 years of personal service to our country and over a century of cumulative military service for the Naylor family.

His work is far from over.

Since May, Jerry has been preparing for the transition back into the civilian workforce. CPS Energy has been at the heart of that transition, helping him through the Department of Defense SkillBridge Program.

Jerry learned about the internship program in an Army brochure. CPS Energy was listed as one of the participating companies and immediately piqued his interest.

For three months, the Army Major has been immersed in learning about the various operations and positions in our Company as we provide electric and natural gas services for Greater San Antonio, or Military City USA, as it’s fondly called.

“Getting a glimpse into the entire day-to-day operations of our Company is something very few people get to see. It’s given Jerry the opportunity to learn what jobs are out there and what his next career path might look like,” says Blaize Skocny, CPS Energy’s Incident Response & Business Continuity Program Manager, who’s been a mentor for Jerry.

In his short time at CPS Energy, Jerry has assisted with storm plan tabletop exercises for areas responsible for generating power and delivering it to our community and leading our safety and security efforts. He’s also had the opportunity to ride along with some of our skilled craft employees and to job shadow, learning what it takes to be an electric troubleman, gas troubleman, control room operator and energy advisor, as well as roles in physical and cyber security.

“So many employees have really impressed me with their many years of hard work and the way they’ve developed such proficiency in their craft,” he said.

As his internship with CPS Energy winds down this week, Jerry is thankful for the new skills he’s learned and the real-life experiences he’s been exposed to the past three months.

Upon his military retirement later this year, he looks forward to finding a full-time job in San Antonio, where he and his wife Stephanie and four children – Freyja, 19; Lana, 17; Jamie, 15; and Iris, 6 – plan to settle.

Supporting our military and veterans

CPS Energy has been an integral part of the San Antonio community for more than 160 years and we’re honored to be able to assist our country’s military and veterans like Jerry. Participating in the SkillBridge Program is among many of the ways we support those who have served, or are presently serving, to defend and protect our great nation. We also help them do business with us by making veteran-owned businesses aware of contract or supplier opportunities. Each year, we award numerous valuable contracts to small, minority, women and veteran-owned businesses.

We also work closely with our partners at JBSA and our other local bases to ensure we’re meeting their energy needs and help them find ways to be energy-efficiency and conservation partners.

CPS Energy employs nearly 300 veterans, who make up about one-tenth of our workforce.

We’re grateful and humbled to be able to support our country’s military servicemembers and veterans. It’s a commitment we don’t take lightly as we work to always put People First!