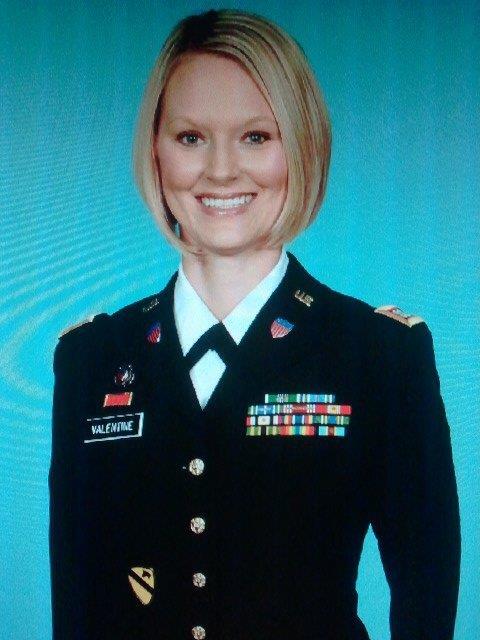 Veterans Day – Nov. 11 – is a month away. As we near that date, we want to recognize the members of our U.S. Armed Forces for protecting our lives and our freedom 24/7/365. This includes the 309 veterans who work at CPS Energy. We thank them for their service to our Company, community and country. Each week through Veterans Day, we’ll be spotlighting our veterans.

Christina Valentine may be petite in stature but don’t let that fool you. The Port Arthur native grew up with a Marine father and four brothers, and fit right in as she hunted, fished, and camped alongside them.

Tough and determined, Christina isn’t one to back down from anything. When she was just 17, she decided there was more to the world than her small town. She felt being in the military would be her ticket to seeing other places, even though she wasn’t old enough to enlist on her own.

“My dad told me the Marines wasn’t for a girl, so I brought the Army Recruiter home with me,” she recounts. “He [her dad] signed the papers for me to enlist.”

She was among a handful of women in a nearly all-male Army unit, but again she fit right in. “There was this perception that I’d never make it. But because of my upbringing, I was able to hold my own,” Christina says, adding softly that her greatest physical challenge was seven-mile runs.

She started out in the weapons room where M16 rifles were stored. She was accountable for their inventory and maintenance. After that assignment, Christina became a personnel actions clerk. She made ID cards, and processed name changes and personnel requests.

“The skills I developed were transferable to what I’m doing here (at CPS Energy),” says the manager of HR Programs, Analysis and Reporting at our company. She and her team members run queries and reports, and perform analytics.

From Ft. Leonard Wood, Christina was sent to Ft. Hood in Killeen, where she spent a majority of her 24-year career. She recalls being there on 9-11. “I was in the woods conducting a field exercise. On the way back to camp, I learned the towers (World Trade Center) and Pentagon were hit. Emotions were high and military bases across the country were put on high alert.”

In 2008, Christina would face her toughest challenges ever – leaving her almost-two-year-old daughter, Emma, behind to serve in Iraq, and surviving the ongoing mortar attacks.

“There wasn’t a place where fighting wasn’t taking place – it was all over the country,” says Christina. “We encountered mortar attacks the very first day I arrived in Iraq. I was scared, and worried about getting home to Emma.”

To help ease tension during her 11-month tour in the Middle East, Christina frequently skyped with her daughter and talked to her on the phone. She also focused on her duties as the 1st Cavalry Division Morale, Welfare and Recreation Officer, in which she planned events and escorted well-known people and celebrities, including Angelina Jolie, Stephen Baldwin, former UT Head Coach Mack Brown, U.S. Vice President nominee Sarah Palin who signed Christina’s combat patch, and country crooner Mark Chesnutt who penned her medical boot. But none touched Christina as much as a group of former Miss Americas who serenaded her with “God Bless America.” Their performance brought her to tears.

Christina was promoted to 2nd Lieutenant, 1st Lieutenant and then Captain. One of her last official assignments was as a Commander at Ft. Knox, Kentucky, where she oversaw 450 troops and was in charge of their safety, welfare, logistics and training.

She retired from the Army in July 2016. Standing at 5’4”, Christina is proof that you don’t need brawn to serve your country – just determination and a can-do spirit.

Christina, who holds a master’s degree in HR Management from Webster University, shared that while continuing to work for our company she hopes to open a non-profit to help homeless people. This, she says, was stemmed by the poverty she saw while stationed in the United States and abroad, including Honduras and Korea.

Thank you, Christina, and all of our veterans for your service. We salute you!

One thought on “Petite Commander proves to be ‘Army strong’”