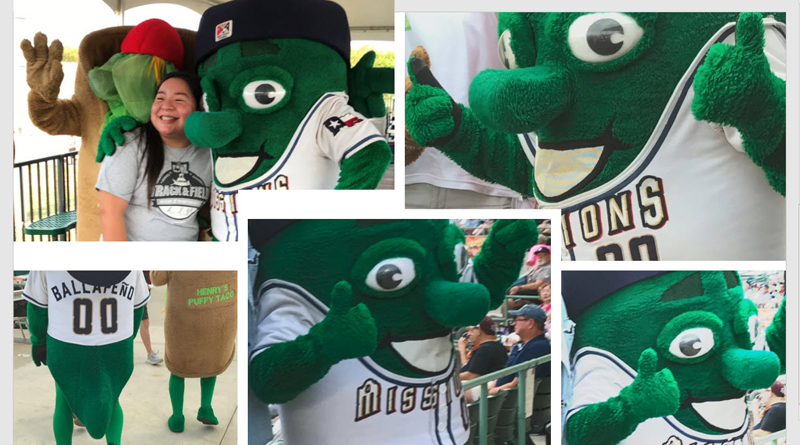 Most of us probably have a personal deep secret that we’ve never divulged to anyone or have only shared with our closest friends or spouse. Maybe yours is that you eat a pint of ice cream every night before going to bed, or you’re a video game junkie, or maybe you listen to classical music on your drive home from work.

Some secrets are too good or too juicy to keep so I can’t help but share this one with you. Psst, listen up. One of our CPS Energy team members routinely goes “undercover” when off the clock. No, the person is not out secretly spying or digging up dirt on people. This person is the San Antonio Missions official mascot, the Ballapeno – that giant jalapeño that goes around entertaining Missions baseball audiences. Yep, you heard right. The employee-turned-Ballapeno works for CPS Energy, in our lineup of nearly 3,200 employees, made up of engineers to lineworkers to gas servicemen to accountants and mechanics.

I had to see this for myself, so before the season ended, I took in a Missions game even though it was still 90-plus degrees on this Saturday evening.

After an uneventful first inning, there was a flurry of activity near first base and laughter erupted across the stadium. The Ballapeno had made its debut in grand style, challenging the unpresumptuous umpire to a dance-off. However, it wasn’t much of a competition: the umpire had more moves than Bruno Mars.

A short while later, the Ballapeno was met by longtime friend and the Missions first mascot, Henry the Puffy Taco. The colorful, energetic pair made their way from one end of the stands to the other, cheesing it up for photos and dishing out high-fives while occasionally slipping in some humorous playful antics. The iconic flavorful mascots seemed to be a bigger hit than the Triple-A teams on the field.

On this night, the Ballapeno was feeling extra spicy in the jalapeno-green costume and Missions jersey and cap. I turned to see the mascot firing up the crowd, as it stood on the Missions dugout. I spotted the Ballapeno later – after all it is hard to miss this larger-than-life pepper — stuffed into the back of an ATV, peppering T-shirts into the stands as the ATV drove along the first and third baselines.

As the game went on, the mascot never seemed to lose any spunk. Before the seventh inning stretch, the Ballapeno was back on the field, this time sprinting around the bases as a trail of young fans raced behind.

After three extra innings of play, the Missions finally pulled ahead to win the game. And while the Ballapeno didn’t personally put any runs on the scoreboard for the home team, it was as clear as the starry nighttime sky that this mascot is a home-run hit with fans.

The Ballapeno invited me into the locker room for a short lighthearted pre-game interview. I want to share some of that interview with you.

Me: Aside from being Ballapeno, what other mascots or characters have you portrayed?

Ballapeno: I got my start in the NBA with the San Antonio Spurs as the Coyote, going to elementary schools to promote good, healthy habits and choices. I later was the mascot for the Orlando Magic, Stuff the Magic Dragon. I’ve also been an Elmo lookalike.

Me: How long have you been donning the Ballapeno costume?

Ballapeno: This is my third season, although the Ballapeno made its first appearance some nine years ago.

Me: What does it take to be a good crowd-pleasing Ballapeno?

Ballapeno: A great sense of humor and to be in good physical shape. A basic knowledge of baseball and dance skills are a plus.

Me: Are the kids ever scared of you?

Ballapeno: Yes, and sometimes even the adults! I don’t try to scare kids on purpose but sometimes it just happens. I do try and scare adults though … that’s always funny!

Me: It’s scorching hot outdoors. How do you stay cool when you’re in costume?

Ballapeno: I DON’T! I wear a bandana and a T-shirt under my costume and change them when I take breaks.

Me: What was life like growing up with Mama Peno?

Ballapeno: Growing up, Mama Peno kept me in line. With sniper-like accuracy, she could hit me from across the room with her chanclas. Today, she still keeps me and all the fans in line with her giant blue and pink chanclas! You haven’t lived until you’ve been smacked by a Mama Peno chancla!

Me: If you could be any other mascot or character, who would it be?