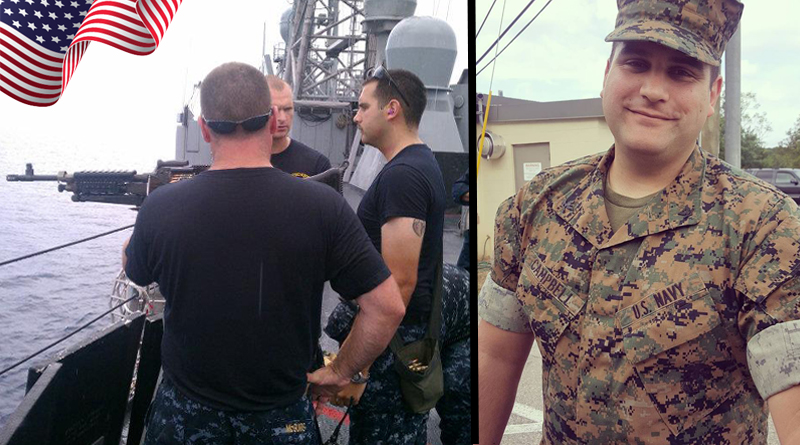 Individuals join our nation’s Armed Forces for various reasons: Some feel it’s their duty to serve, some want to take advantage of the benefits, and for some it’s a family tradition. Others, like Eric Campbell, see it as an opportunity to get their lives together and to be part of something bigger.

“I was 23 at the time and going from job to job. I wanted to do something with my life.”

Though this year’s Veterans Day seems a distant memory, we continue our series to spotlight a few of the nearly 300 military veterans who’ve found second careers with CPS Energy. Today, we spotlight Eric for his service to our country, our community and our company.

Eric enlisted in the U.S. Navy in 2009. He was in charge of a group of sailors who managed inventory and charged out tools as well as maintained water pipes and fuel lines.

“I thought when you went into the military you were assigned a job and you did that one job. Turns out when you join the Navy, you become responsible for that job but also learn many other things, including weapons handling and firefighting and EMT skills,” he said, adding, “I picked up a lot of great knowledge along the way that I’ll keep with me for the rest of my life.”

Eric was stationed on the West Coast — Washington and California — before volunteering for the Top Gun program in Nevada for three months. Like the inventory work he did aboard the Navy’s vessels, he handled the receiving and reordering of jet parts, and made sure tool room supplies were accounted for.

“I was able to see half the world,” he says of those experiences. “We hit Russia, Japan, Thailand, Philippines, India, Singapore and Sri Lanka. Along the way, I was able to climb Mt. Fuji.”

While the deployments provided Eric new adventures and opportunities to visit many parts of the world, he admits the lengthy, distant travels presented mental and physical challenges.

“Being away from family and friends is really hard on the mind. I still remember lying in my rack and wondering if I’m ever going to make it back home. Eventually the time passes once you get to know people,” he said. Eric worked out twice a day to help pass the time and stay in shape, noting that he dropped nearly 50 pounds during his first deployment.

The Logistics Specialist Petty Officer 3rd Class served in the Navy until September 2017 and came to work for CPS Energy the following year, applying many of the skillsets he picked up while in the military.

A utility worker at our company’s Eastside Service Center storeroom and pole yard, Eric spots and controls the movement of heavy equipment such as the skyjack that’s used to load poles on trailers for delivery to jobsites. He also assists with day-to-day storeroom operations.

“I know how to deal with heavy workloads — how to make time and put in effort into everything I do for this company,” says the father of four. “The Navy core values are Honor, Courage and Commitment, and I still hold myself to those values today.”

Thank you, Eric, and all of our nation’s military veterans, for bravely and unselfishly defending and protecting our great country.