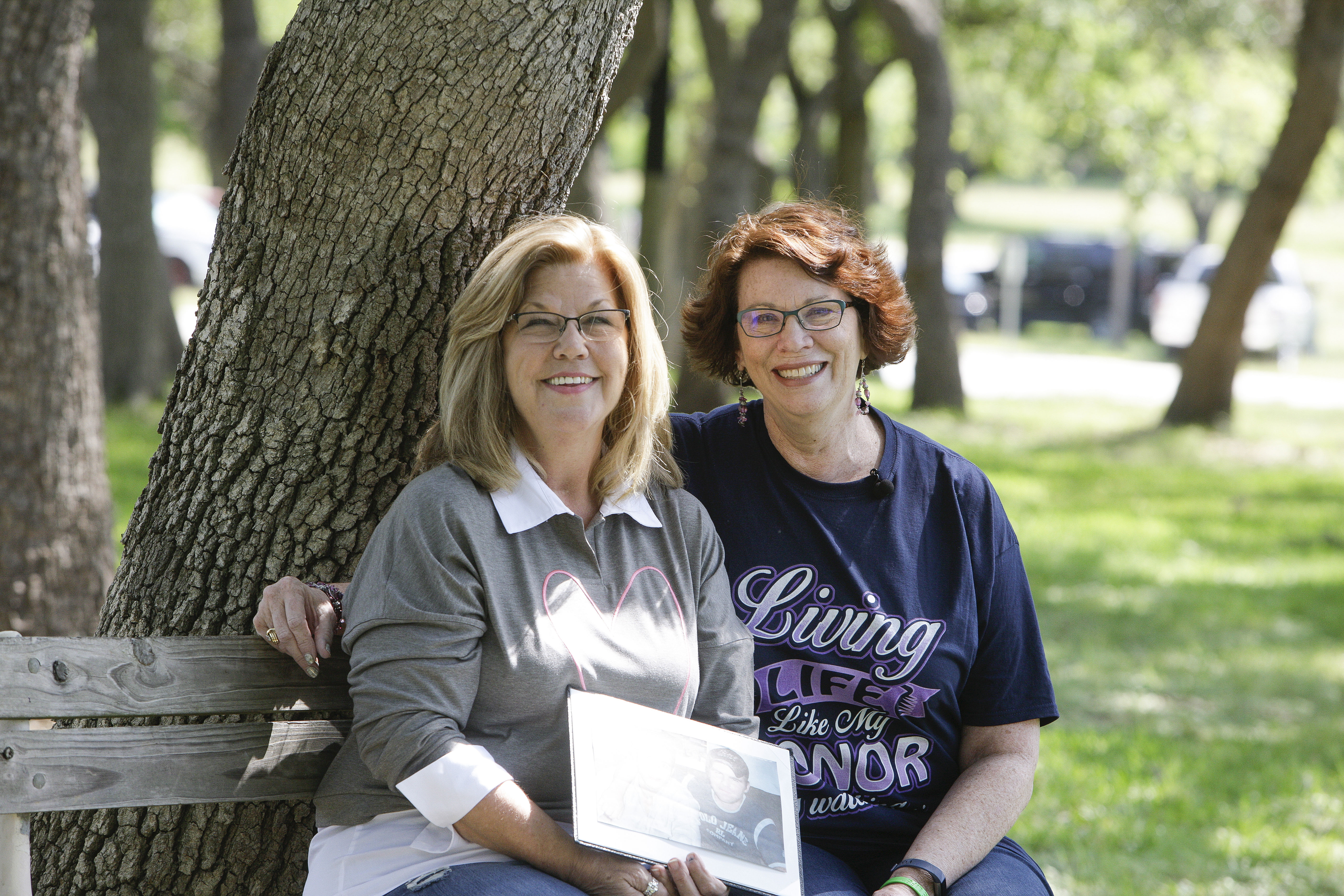 Karen Smith and Sandy Watson first met in 1998 – brought together by their faith. They belonged to the same church and church groups and became close friends. Sandy sits to the left of Karen in the above featured photo.

Fast-forward to 2003. Sandy had two sons who were 25 and 20. Karen was raising three children ages 5, 6 and 7 on her own. Like many other parents, Karen read to her children each night at bedtime. However, it became a struggle for her as she was having shortness of breath.

“After reading to the boys, I would go across the hall to my daughter’s room and I would have to rest for about 10 minutes before I could read to her,” recalled Karen, a contract manager at CPS Energy’s Supply Chain department.

She eventually went to the doctor, and in May 2003 was diagnosed with cirrhosis of the liver.

As the disease progressed, Karen’s memory was affected and she had difficulty remembering people’s names and the names of common everyday items like tomatoes for her hamburger.

The disease continued to take a physical toll, as well. Karen was fatigued and she experienced severe fluid buildup in her abdomen. Each week, doctors drained about six to eight liters of fluid from her body.

“It was like being pregnant every week!” she said with a slight chuckle.

By August of that year, Karen was placed on the national organ transplant list. Months passed and finally in April 2004, she received a call that a liver was available for her. Then came the disheartening news that it wasn’t viable for transplant. Karen received two more calls about available livers, and two more times was disappointed as neither of those livers were viable.

“There were a few times when I wanted to give up, but I knew I couldn’t because I had three children that I had to live for,” said Karen. “My family and friends kept me going with their encouragement and prayers.”

Faith and fate come together

On June 27, 2004, Karen was on her way to a church gathering and drove passed a serious vehicle accident. She didn’t know who was in the accident, only that it looked bad. At the social, she and Sandy visited for a short while. As Sandy was leaving, she kissed Karen on the forehead and told her, “I know you’ll have a donor soon. I can feel it in my bones.”

That night, Sandy was notified that her oldest son, Jeremy, had been in a vehicle accident – the same accident Karen had driven by that evening. The once full-of-life 25-year-old was now on life support.

Doctors shared the heartbreaking news that he would not survive, and the grieving mother was approached at the hospital about donating her son’s organs. Sandy was pleased to learn Jeremy had indicated on his driver’s license that he wished to be a donor. In the midst of everything unfolding and her life being turned upside down, Sandy thought of her friend who was in dire need of a liver.

Karen’s phone rang at 3 a.m., Tuesday, June 29. A liver was available – Jeremy’s – and the mother of three was taken from San Antonio to the Baylor College of Medicine in Houston for the transplant.

Karen shared her emotional journey with her coworkers yesterday, with Sandy standing by her side. Their story also aired yesterday on KSAT-TV.

Sandy’s faith gave her comfort that she would see Jeremy again and that his final gift had saved her friend’s life and four others, including a two-year-old. “I’m going to see him later. And right now, she gets to watch her kids grow up, so it’s good,” Sandy told the group of CPS Energy employees. “Jeremy is a hero, and everybody has the opportunity to be a hero. It’s in each and every one of us.”

What you should know about organ donation

April marks National Donate Life Month. According to organdonor.gov, more than 110,000 people are on the transplant list; 20 die each day waiting for a life-saving organ.

“Losing my son is something I will never get over, but I have learned to cope with the sorrow that sometimes hits me like a ton of bricks. I find such comfort in knowing that because of Jeremy others were given the gift of life,” said Sandy. “When you renew your license, say ‘yes’ you want to be a donor.”

You can visit organdonor.gov, the Texas Organ Sharing Alliance (TOSA) or Donate Life America websites to learn more about organ donation and to register.