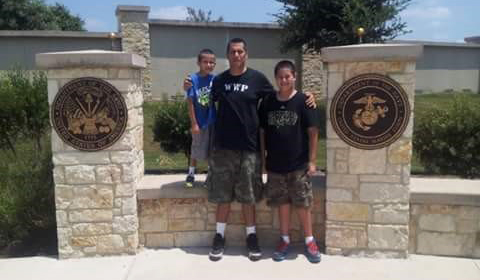 Eddie Perez Sr. and his two oldest sons attended the annual Memorial Day ceremony at Ft. Sam Houston National Cemetery in May. It’s been their practice for the past seven years, since the two were just three and seven years old. It’s also been a practice for Eddie to snap a photo of his sons at the flag pavilion – the same spot where they posed with their grandfather who joined them for the ceremony until 2013 when he passed away and was laid to rest at Ft. Sam.

As a young boy, Eddie looked up to his dad and two uncles, all three of which served as paratroopers in Vietnam. “I really enjoyed listening to their stories about their service and about the military,” he said. “And even though I was young, I noticed how they carried themselves.”

Eddie, one of nine children, attended basic training at Marine Corps Recruit Depot San Diego in 1998. “Some people think coming from a big family is weird. It actually was a bit challenging for me to break away from that support I had at home and to go out and do things on my own,” he says.

There were plenty of physical challenges along the way, too, such as jumping from a high-diving platform into a pool of water with full military gear on and holding a rubber rifle that was the actual size and weight of a loaded rifle. And then there was “the crucible” – the final training revolution that lasts three days and tests a recruit’s mental and physical strength and capabilities.

“It’s pretty much everything you learned packed into three days,” explains Eddie. “You hike from one spot to another, set up tent and complete various challenges along the way.” One challenge he recalls was having to hoist a human-sized dummy strapped to a stretcher up and over a tall, outstretched cargo net.

“When you finish this revolution, they congratulate you and call you ‘marine’ for the first time.”

After basic training, the marine was sent to Camp Lejeune in North Carolina for mechanics training. He learned the nuts and bolts about working on 5-ton trucks, Humvees and LVS’s (Logistics Vehicle Systems) that are large eight-wheeled all-terrain vehicles.

Next, Eddie completed a brief electronics course at Naval Air Station in Pensacola before being stationed at Camp Foster in Okinawa, Japan, for three years. In his new assignment, he performed mechanical maintenance work on the same larger military vehicles he trained on at Camp Lejeune.

He then served in Australia for about three months. “We (U.S. Marines) were split into two groups and partnered with Australian soldiers. We spent 58 days in the middle of the desert simulating war games.”

Eddie returned stateside and was stationed at Camp Pendleton, California. He became a certified mechanic and led about a dozen mechanics who maintained more than 1,000 vehicles. He earned a Marine Corps Achievement Medal for being the only all-Marine Corps to outfit the vehicles with an anti-lock brake system on time (within a year) and under budget.

Eddie rose to sergeant and completed active duty in 2003. He then enlisted in the Reserves and served another two years, during which time he helped secure the perimeter of the prison at Guantanamo Bay.

Eddie came to work for our Company in 2012 and is an electrician trainee. While his duties in the Armed Forces included overseeing the transportation fleet, at our Company he helps oversee our power generation fleet. He and his team members troubleshoot and repair or replace breakers, inspect and change out motors, and replace conduit and wires. They also perform routine preventive maintenance on our power plants.

Away from work, the father of four moves others through his words and actions. Eddie coaches his kids’ basketball and soccer teams, and he preaches at a non-denominational Christian church.

Thank you, Eddie, and all of our veterans for your service to our country!