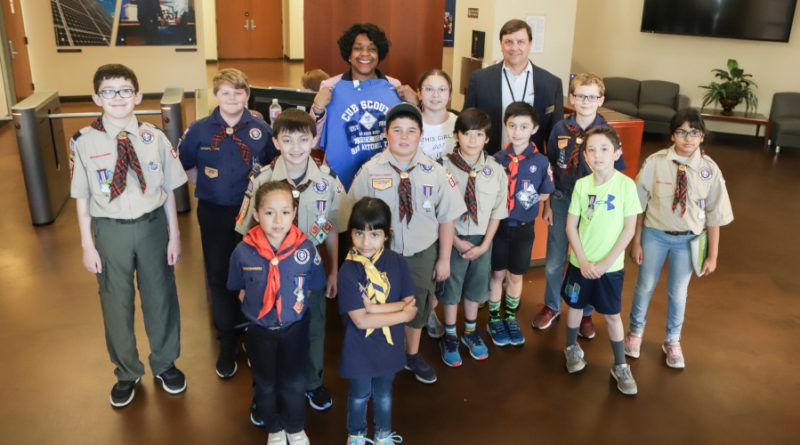 CPS Energy was honored to welcome Cub Scouts Pack 650 as part of its Building a Better World Adventure on March 20. The troop selected CPS Energy specifically to hear from President & CEO Paula Gold-Williams, who also serves as the 2019 Chair of the Board of Directors for the San Antonio Chamber of Commerce. Longtime Cub Scout supporter, John Bonnin, Vice President of Energy Supply & Market Operations was also on hand to take part in the fun. The event would have been a great, “Kids Say the Darndest Things” episode.

The students were amazed at the part CPS Energy plays in making their lives so enjoyable. From powering their televisions to charging their favorite electronic devices, and most importantly keeping the lights on, CPS Energy is in every aspect of their lives. They were amazed to find out that San Antonio requires the same amount of energy as the entire states of Wyoming and Montana combined. They were also astounded to find out from Bonnin that you can bake a cupcake in an orange peel, except for one of the scouts who isn’t a fan of oranges.

With volunteering being an incredibly big part of being a Cub Scout, Gold-Williams was asked about her favorite place to serve as a volunteer. “Each one of them has been special and I just make sure that I enjoy it when I do it. I can’t say I have a favorite, I’ve just been blessed to do a lot of different things,” said Gold-Williams.

Bonnin, who at first helped his son’s Boy Scout Troop eventually became Scout Master of the troop and absolutely believes in the positive impact the program makes for kids. “As you all are on these adventures as Cubs and Webelos, your parents are learning them too,” said Bonnin. “It’s a thing that is very near and dear to me. Not only do I have a job and work for my family, I feel it is very important to help out the community and that is one of the things that the Cub Scouts is all about.”

At the end of the visit the scouts were gifted newly designed 2019 CPS Energy Fiesta Medals and as a thank you, the scouts made Paula Gold-Williams an honorary member of Troop 650.