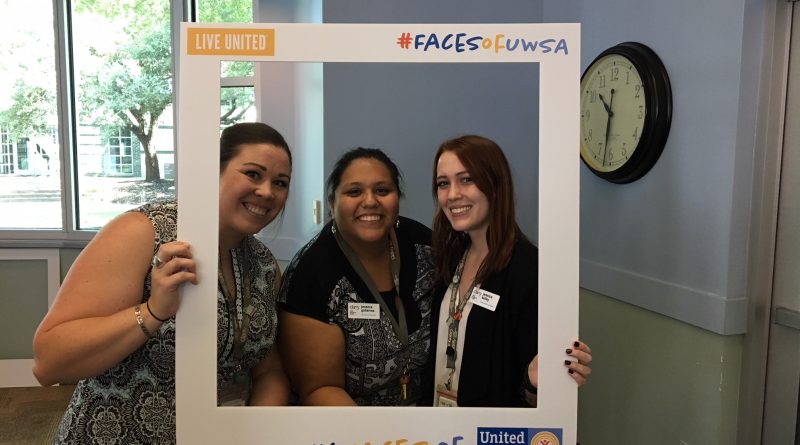 After working in two local newsrooms, City Hall, our public health department and now CPS Energy, I really thought I knew this community and the agencies that help people. I was wrong! For the past three weeks, I’ve had the privilege of serving as one of 19 United Way Loaned Executives (LE) for the 2018 campaign and I am amazed at the work going on inside the walls of our non-profits.

There are stories with the power to restore any lost faith in humanity and unite our community. Stories of healing, deliverance, relief, restoration, hope, rehabilitation, and discovery – all made possible by volunteers and workers of non-profit agencies that receive funding from United Way. Together, these men and women, and their clients, have shown me what it means to LIVE UNITED.

I’ll start with my near heart-stopping experience at the Children’s Shelter. Before we began our tour, their chief development officer described their mission of making children feel safe. It’s their highest priority given their residents usually come to the shelter as a result of physical or sexual abuse or neglect. Later, as we stood in the children’s cafeteria, one of their pre-school residents walked up to an LE and threw his arms around her waist. He then made a beeline for me, giving me a tight hug that made my heart skip a couple of beats. The emotional moment happened after I barely managed to hold it together while visiting the nursery where babies as young as one month lie swaddled in a crib, stretched out in comfortable swings, or nestled in the arms of a shelter caregiver.

Two days before, I got choked up at the Healy Murphy Center after learning the center’s founder – an Irish immigrant – originally started the school in 1888 to educate young black children, an extremely unpopular move at the time that did not go uncontested. The school remains a haven for young minorities and others, helping them get their GED, high school diploma or work toward a college degree. We visited intimate classrooms where white and black teachers encouraged and inspired students to learn math and English. Then, we watched energy in its purest form – little ones enjoying play time on the playground and in classrooms. The center’s caregivers are long-time employees who are committed to their jobs because of the difference they’re making. They help families by taking the stress out of finding quality childcare for teens and young adults who are learning to balance a budget, a job and parenting all at the same time.

The week prior, I heard the triumphant story of Haven for Hope resident-turned-employee, Kevin, who had given up on himself following years of substance abuse. His downward spiral, then eventual uphill success, began simply with taking his first drink as a teenager. Kevin’s commitment to sobriety is now 10-years strong and he credits a Haven counselor who encouraged him on his journey. Now, he’s giving back to people going through the struggle he once fought.

Inside the massive walls of the San Antonio Food Bank, I watched non-violent offenders learning trades like being an equipment operator. We heard emotional stories about graduation ceremonies. The graduates couldn’t help but be moved to tears for the life-change and new hope they were experiencing.  I also learned about the good work in the community to feed seniors, families and students, including the Backpack program that provides students with food and alleviates stress in the homes of families struggling to survive on low-wage jobs.

I listened with tears in my eyes as an older Meals on Wheels employee described how Grace Place, an Alzheimer’s Center, allowed him to keep working by providing day care for his wife as her “progressive” dementia took control of their lives.

Stories filled with compassion, strength, heroism, and commitment flow through lives changed by the many agencies under United Way’s umbrella. I wish you could see for yourself the work being done to prevent children, women and men from falling through the cracks; the support given that says someone cares and wants all of us collectively to succeed. If you could, I have no doubt you’d ask, ‘how can I help?’

The 2018 United Way campaign is officially underway with a $41.25 million goal. If you don’t think your donation can make a difference, you would be just as wrong as I was thinking I knew so much about the non-profit work happening here. So, I’m asking because I honestly feel like there’s no better time, please give so we can LIVE UNITED.