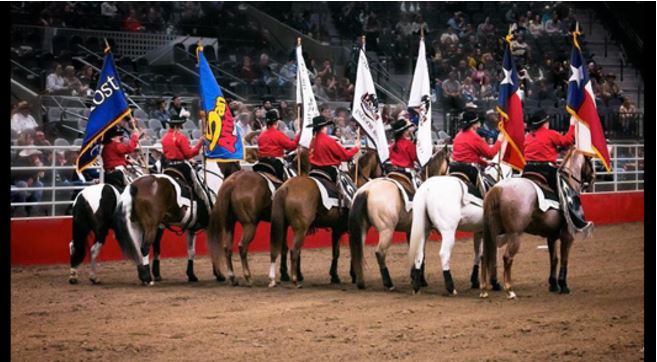 At the tender age of 10, Kim Luensmann hopped onto the back of her very first pony. Though the equine was mean-spirited, he couldn’t break Kim’s spirits. And the young Marion, Texas cowgirl was soon saddled up on horses nearly one-and-a-half times taller and 10 times heavier than her.

“I never looked back,” says Kim, who has spent the last 30-plus years perfecting her riding skills.

She’s using those skills as she and her 22-year-old red roan quarter horse, Cowboy, race into the AT&T Center for San Antonio’s 2019 Stock Show & Rodeo. Kim and Cowboy are no strangers to the rodeo: this is the 11th year they’re wowing audiences as members of the elite Jack Seller’s Bexar County Palomino Patrol Drill Team.

A data control clerk in CPS Energy’s Substation Maintenance area, Kim noted it’s great to be part of a team, inside and outside of work, and that “teamwork” is as important to the Drill Team as it is to the utility. “At CPS Energy, we emphasize engagement and working together as a team toward a common goal. With the Drill Team, we’re also working toward a common goal, which is to put on the best show we can at every single performance.”

You can bet your Stetson that the Drill Team is delivering on that goal.

The team is making its “grand entry” in front of thousands of folks packed into the dimly-lit AT&T Center before each of the rodeo’s 21 scheduled performances.

During the grand entry, horses and riders display their talents in a well-choreographed show that is sure to stir emotions. The Drill Team lands the audience on the edge of their seats as they perform breath-taking stunts like galloping toward each other at top speeds and nearly brushing against one another. The action then slows for a few somber moments as they conduct a special tribute to Texas’ heritage and a “Salute to America” presentation.

“When we gallop full blast into the arena with flags flying, it almost leaves a knot in my throat. Then the crowd starts cheering. It’s a feeling like no other,” says Kim, who this year is riding at the front of the 16-member Drill Team with a Texas flag in hand.

To build trust and help ensure their performances go off without a hitch, the team begins practicing six months before the rodeo’s kick off. They also participate together in events such as the Western Heritage Parade in downtown San Antonio, an annual precursor to the rodeo.

But despite the hours and hours of practice, even the most seasoned rider-equine team like Kim and Cowboy can have a misstep. During the grand entry two years ago, Cowboy lost his footing and balance when rounding a turn at full speed in the soft dirt covering the main floor of the AT&T Center. Kim tumbled to the ground, her shoulder breaking the wooden flag pole she carried. Cowboy also went down but quickly jumped up and carried on with the show, his saddle empty.

Kim later underwent surgery to repair her shoulder, and she and Cowboy were back entertaining the crowds again at last year’s rodeo.

When she’s not practicing and performing with the Drill Team, Kim spends many of her weekends barrel racing – her all-time favorite rodeo event and one that she’s been doing for nearly two decades. In barrel racing, the horseback rider races individually in a clover-leaf pattern around three pre-set barrels. The rider’s goal is to safely and successfully complete the course with the fastest time.

“Leroy [her bay quarter horse] and I run close to home,” says Kim. “It’s more of a hobby than a competition.”

When asked what she enjoys most about horseback riding, you might expect Kim to respond that she likes the adrenalin rush from racing on her two horses. Surprisingly, she speaks of the calming effect that riding brings to her.

“If I’ve had a bad day or feel stressed, I jump on one of my horses and go for a ride,” she says. “It seems to take the stress away, and my problems just seem to disappear.”

If you can’t make it out to one of this year’s performances at the San Antonio Stock Show & Rodeo, you can catch Kim and Cowboy and the rest of the Drill Team trotting in our city’s downtown streets in April for the ever-popular Fiesta Battle of Flowers Parade.