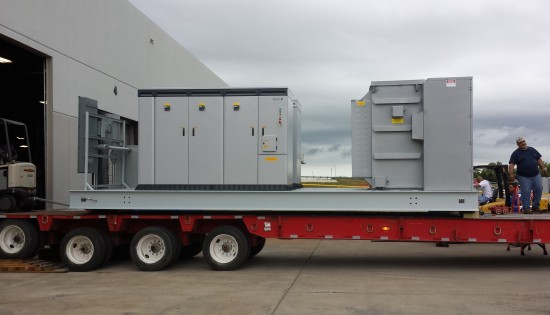 The crane, housed in a new warehouse space on Binz-Engleman Road, can lift transformers onto the heavy metal skids used to mount the solar inverters, each of which weighs 12,500 pounds.

Until the addition of the new space and the heavy metal crane in January, Alamo Iron Works built the inverter skids, which are used to stage and ship the inverters. Now KACO brings in the raw steel which serves as a foundation for the inverters, lays the steel out on special guides, welds it, and plates it. All components of the solar inverters are built in-house.

“We’re now completely vertically integrated,” says Bradley Feuge, Customer Project Manager for KACO.  “It allows us to completely customize the inverter solution for the customer.  This is a huge advantage.”

NOTE: Solar inverters convert solar power, which comes in as direct current (DC) to alternating current (AC) so it can be transmitted onto the grid.

KACO inverters are used in many of the new solar farms being developed to bring more renewable power to CPS Energy customers.

Based in Neckarsulm, Germany, KACO became the first Texas manufacturer of residential inverters last July when it cranked up the San Antonio facility’s production of 2-to 5-kilowatt inverters. The company also builds utility-scale inverters. It takes a full 10-hour shift to produce a single utility-scale converter, while 15 residential inverters can be built in a day. “If capacity becomes an issue, we can add a night shift,” says Feuge.

The extra work required KACO to increase its manufacturing space–from 56,000 to 86,000-plus square feet. A dozen new employees were also added, bringing local KACO staff to 75.

Roy Salinas is one employee benefitting from the increased workload. Salinas, 22, attends Palo Alto Community College five hours a week working toward an associate degree in electrical engineering while getting hands-on experience at KACO.

Residential solar inverters made in San Antonio for sale