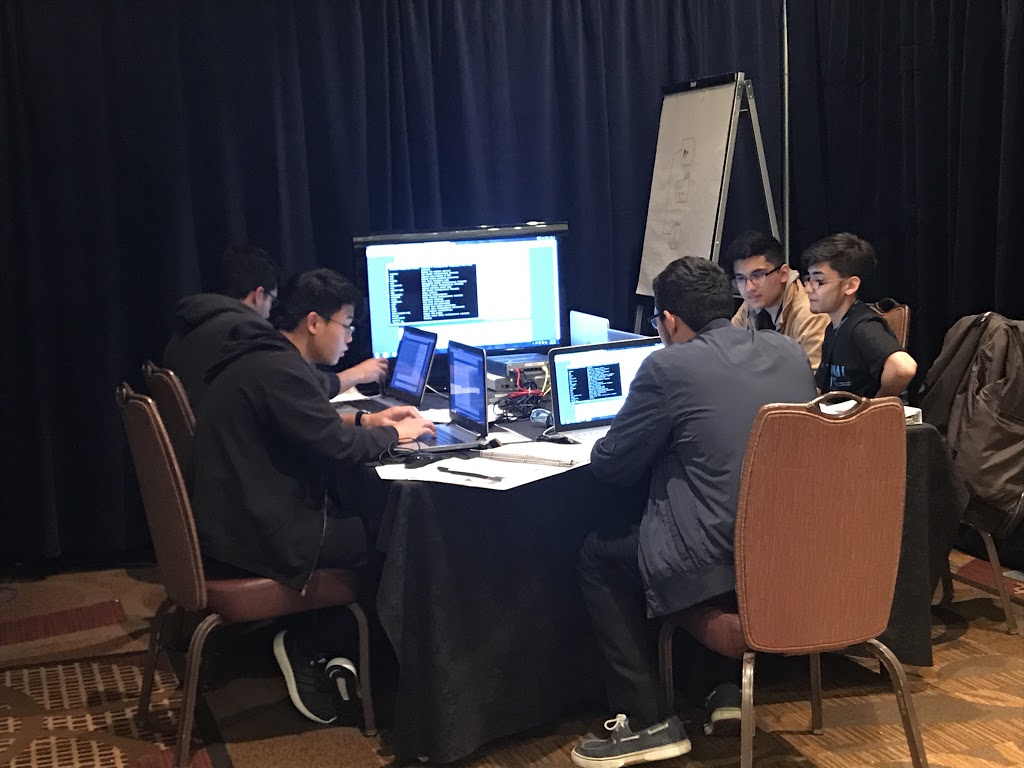 As the countdown clock ticked away, Eddie, Isaac, and Rameez huddled with their team and executed the game plan. Defense was critical. Instead of blocking a pass or defending a goal, the team used their savvy cyber skills to build a computer network and protect it against simulated cyberattacks. There were no bleachers full of cheering fans or loud music. Instead, teams at the National CyberPatriots Competition quietly huddled with their laptops and quickly typed strings of code.

The promising students from Alamo Academies spent months training and competing on the road to nationals. The team placed first at the state competition and second in the Southwest Region out of 2,200 teams. They ranked seventh nationwide and qualified to compete against the top 12 teams at nationals. Alamo Academies has sent teams to nationals six out of the past seven years. Last month, the team won the Mayor’s Annual Cyber Cup.

What made them so successful? Eddie Flores, Isaac Knotts, and Rameez Shaukat trained with San Antonio College professors and had a lot of support from Alamo Academies. They say the knowledge and experience they gained in our SITE internship program also gave them a competitive edge.

“During competition, I drew a lot of inspiration from the time I spent with my mentors last summer,” said Eddie. “Learning how employees set up and protect CPS Energy’s network gave me a good point of reference and basic knowledge that I took with me to the competition.”

During the summer, Isaac worked with our EDS Asset Management team on a new database project while Eddie and Rameez enhanced their technical skills working with our Enterprise Information Technology team.

“I learned a lot of programming,” said Isaac. “Employees showed us what a program or script should look like and it really gave us a competitive edge.”

Isaac, the team’s captain, originally joined the team with little expectation of winning.

“It feels amazing that we got this far,” he said. “When I joined the team three years ago, I didn’t think I would really get anywhere with this. I just thought it would be something fun to do.”

Alyssa Trevino, team coach and program coordinator at Alamo Academies, says she’s proud to see how much the students have grown.

“The national competition is mentally and emotionally challenging,” said Alyssa. “They’re competing all day long, but their ability to maintain focus and problem solve under pressure is really a testament to what they learned at CPS Energy.”

Trevino said the team made some errors during the state competition that put them in jeopardy. However, the team found the resolve to push through to the regional competition.

“They gained a lot of confidence during their internships that helped them overcome challenges at state,” she said. “Last summer, they worked around professionals who helped them believe in themselves. I want to thank CPS Energy for investing in our students.”

After three intense days of competition, the team learned they didn’t win at nationals. Although disappointed, the students acknowledge they’ve grown a lot along the way. Just making it to nationals says a lot about what they can do.

“I feel proud of what we accomplished,” said Eddie. “It’s a validation of our abilities and skills.”

SITE Interns get valuable experience with a personal touch

First female machinist, other interns head back to school with experience