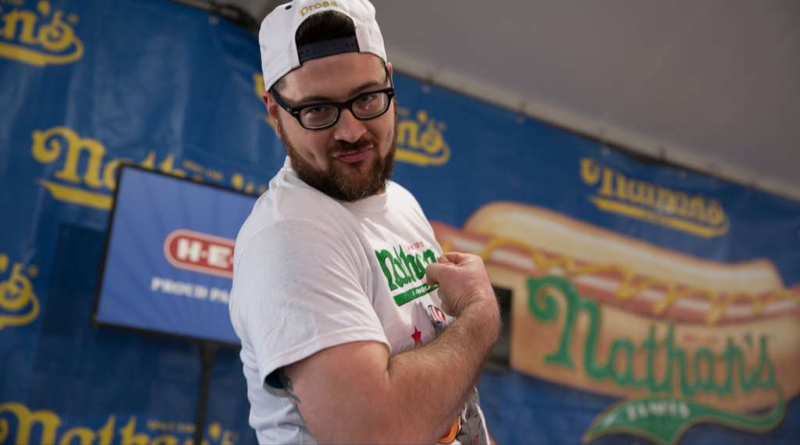 Imagine you’re kicked back this summer at a San Antonio Missions baseball game, feet up, ready to relax and enjoy some ballpark food. Maybe it’s dollar hot dog night and you skipped lunch, so you can pig out. How many dogs would you scarf? Three?

Triple that number, and that’s how many hot dogs Branden Dross downed in just ten minutes at the Nathan’s Famous hot dog eating competition at this year’s San Antonio Stock Show & Rodeo. That’s right, Branden, a Community Field Service Representative at CPS Energy, was noshing at nearly a dog per minute clip, but when it was all said and done, he spoke humbly about his performance.

“I could have done a little better,” he said. “I tried and tried, but once I saw the winner [who ate 27 hot dogs in the same time], I knew I wasn’t going to catch him.”

But for Branden, the contest wasn’t about winning or losing. It was all about living out a childhood dream.

“I grew up in New York and the Nathan’s Famous hot dog eating contest in Coney Island is a big deal,” he said, referencing the national competition that takes place every Fourth of July. “It’s always been a life goal of mine to compete in the qualifier, so it was magical.”

Branden emphasized that he wasn’t alone is his gastronomic quest. He had the support of his wife and son, as well as several CPS Energy coworkers who came out to watch him compete.

“I was pretty happy and honored to see them there,” he said. “It’s on a Saturday afternoon and we work a lot, so for them to take some time out of the day to support me was pretty awesome. They thought I was nuts when I first told them about it, but they came out to support me regardless.”

While he would still love to reach the national competition someday, just being up on the stage with his Nathan’s shirt on while munching in front of family and friends was enough for Branden.

“It was more about living the dream instead of winning,” he said. “I was an underdog, but just to be on that stage and do it was a dream come true.”

(Photo by B. Kay Richter for MySA.com)