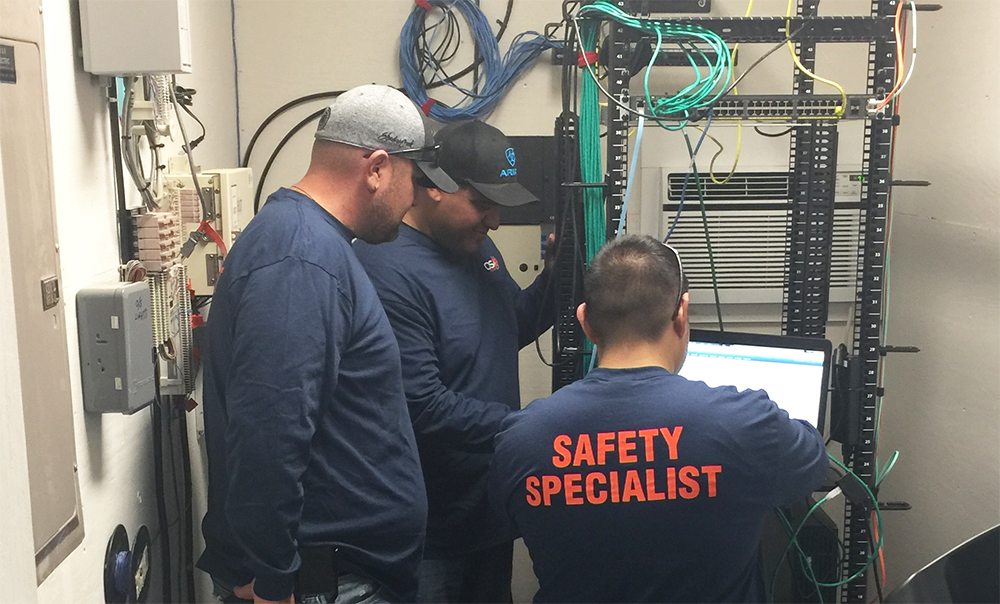 When you think of relief efforts after a hurricane, first you think of shelters, blankets, cots and bottled water – not laptop computers and networks. But in today’s world, when it’s time for a community to start over, information technology may be as important as lumber and nails. For big cities like Houston and smaller towns like Rockport, Texas, the time to start rebuilding is now and CPS Energy is proud to lend a hand.

Our utility is part of a joint task force helping Rockport and the County of Aransas rebuild their government offices so their citizens can begin rebuilding their homes and lives. It’s made up of representatives from CPS Energy, the City of San Antonio, San Antonio Water System (SAWS) and VIA Metropolitan Transit. The task force is in Rockport this week setting up multiple networks that will allow Aransas County and Rockport to run their governments outside of the emergency operations center set up before Harvey arrived almost two weeks ago.

Area officials are creating temporary government offices in a vacant shopping center and other habitable locations around Rockport. The City and VIA are providing desktops, laptops, phones and scanners. CPS Energy is providing networking equipment and expertise, while SAWS is deploying a high-speed wireless backhaul network.

CPS Energy sent two employees on Wednesday to scout the locations and determine what equipment would be needed to set up the networks. Another four-person team arrived in Rockport this morning to begin configuring the network.

Ron Ward, an enterprise architect for CPS Energy, says he and his family have been frequent visitors to Rockport over the years. He could not believe the devastation he saw when he arrived.

Ward says he’s glad to have the opportunity to be a part of the rebuilding process.

“What we’re doing is connecting the people – who are dealing with all of this damage – back to their government,” says Ward. “These officials can’t get permits out, the appraisal office is down, the tax office is down. They can’t even get reimbursement from FEMA because all of their systems are down.”

The CPS Energy team, along with the rest of the task force, is prepared to stay through Saturday to set up the new networks. Kim Walker, a desktop and mobile support specialist in Rockport as part of the team, saw the damage last weekend when she helped a friend recover property.

“I’m glad to provide any service I can,” says Walker. “The pictures don’t do it justice until you see it in person.”

A 53-person crew from CPS Energy has been in Victoria and Bloomington, Texas, over the last week providing power restoration assistance to AEP Texas. Wednesday, we also responded to a request by CenterPoint Energy for network protectors to help restore power to parts of Houston’s central business district.

Network protectors sense and isolate faults in a circuit and redistribute power before there is a power outage. In most cases, these protectors are located in underground, water-resistant vaults. However, because of the volume of flood water in Houston’s downtown area, as many as 48 network protectors were damaged. These protectors take months to manufacture and replace. CPS Energy was one of several utilities asked to provide protectors to CenterPoint Energy to expedite Houston’s restoration process.

“We are happy we can help,” says Rick Lopez, director of Distribution Engineering. “We checked and we had an extra inventory of these protectors that were not already assigned for projects in our downtown area. We still have a few spare protectors if we should need them.

“Once we determined we could help, the team quickly wrapped the large devices and put them on a truck to Houston.”