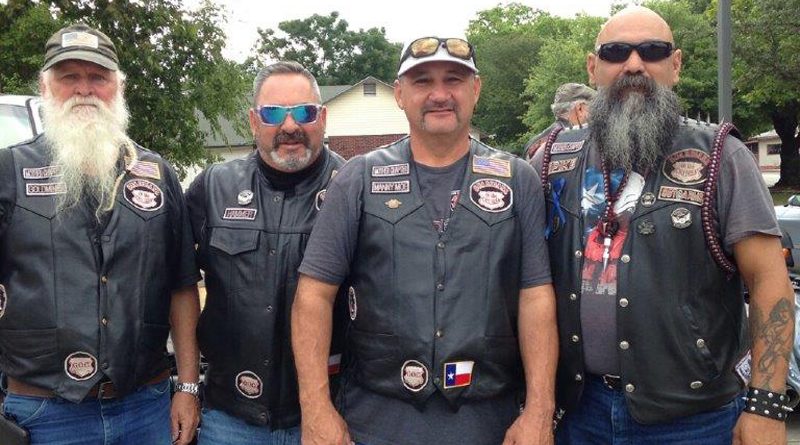 It’s that time of the year when kids are putting together their Christmas wish lists or whispering to Santa what they want. It’s probably safe to say that many, or most, will ask for cool stuff like the latest Nintendo or Xbox gaming station to hit the market, a new iPhone or iPad, Beats earbuds, LEGOS, Barbie dolls and that Hot Wheels triple-loop track set.

But not all kids’ wants and wishes can be easily gift-wrapped and tucked under the Christmas tree. Sadly, there are youngsters in our community who long to feel safe and protected from those who’ve committed unthinkable acts to them.

This is where the team at Guardians of the Children (GOC) rides in. Part of this non-profit organization’s mission is to recognize and react to child abuse and educate the public to do the same.

Though these bikers look rugged and tough, it’s quickly apparent when speaking with them that they’re actually tender-hearted, especially when it comes to kids and the volunteer work they do with GOC.

“Adopting” children in our community

When learning about a child who needs assistance, generally from Child Protective Services, GOC is swift to respond and rallies together to “adopt” the youngster.

These adoptions, however, aren’t your normal courtroom-type event. Rather, a group of around 30 members drive up on their motorcycles to the child’s house, where they present the youngster with a certificate, flashlight, bandanna and sunglasses. The kiddo is also given a teddy bear that’s ceremoniously passed down from one member to the next before it’s handed to the child. Another highlight of this unique adoption process is that the children get to choose their own road names, or biker names.

“We don’t know their personal stories or bring up their past. We just want to be there for them, to protect them,” said Andy, who’s been with GOC for about a year.

Taking a stand for children

Along with adoption ceremonies, GOC members have a strong presence at court hearings. They stand shoulder to shoulder so their “adopted” children don’t have to make eye contact with their perpetrators.

“This is the only group or club that’s allowed to wear its colors in the courtroom,” explained Manuel, who’s made about a half-dozen court appearances during his two years with GOC.

One of the most satisfying moments, agree the four members who work at CPS Energy, are when you see the perpetrator get justice for the kid.

Setting an example for young followers

Another fascinating tidbit about GOC members is that they always greet each other with hugs. They also hold hands and say a prayer, no matter where they’re at. Yes, even these big guys aren’t afraid to hug and hold hands with one another.

“The kids are watching us. They see us hugging each other. It sets an example for them to follow,” said Andy.

The group often hears from parents who’ve witnessed how their children have come around – are less afraid to show affection and are more open. They’ve even seen it for themselves.

Both Manuel and Andy recall a young lady who was only comfortable giving them a peace sign when they first met her. Just three days later, she was giving hugs to everyone around her. The young lady’s mom was overjoyed about her daughter’s breakthrough to reach out to others.

GOC helps raise awareness of abuse, handing out brochures and speaking to folks about what they stand for and what they do.

“Bikes are a tool for us. Who doesn’t like bikes?” asks Ernie. The children really seem to take to them, which is evident by all the small fingerprints smudged on the glistening bikes at a recent child abuse awareness event members attended.

Ernie and his GOC peers at CPS Energy admit that driving down expressways on their Harleys in their black leather jackets is kind of cool. “People will honk, wave, give you a thumbs up. There’s a sense of pride,” said Ernie, adding, “But the biggest deal is when someone randomly comes up to you in a restaurant or at an event and tells you, ‘We love what you do.’”

A sweet season of giving at CPS Energy