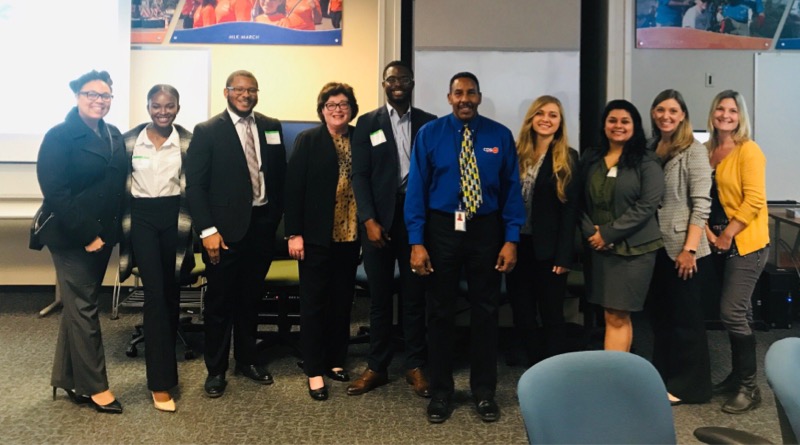 When a new generation enters the workforce, there’s often a change of dynamic in the office. New workers bring new skills, new points of view, new ideas and new challenges. To anticipate this change and prepare for the future, we hosted a Generation Z Panel Discussion with the University of Texas at San Antonio (UTSA) on Thursday, December 6 at our downtown office.

Members of Generation Z were born between 1995 and 2015, so the oldest members of the generation are just now beginning to enter the workforce. The four UTSA students who comprised the panel were able to answer questions from CPS Energy leaders who were curious about their desires and career plans.

“For me, what I value is the stability in a job and the ability to progress,” said Jessica Milligan, a graduate student at the university. “My supervisors should be looking for areas where I can progress in my career. Also, having the ability to create and having the type of environment that allows for creative expression is important.”

Jessica’s ideas were similar to those of her peers. The panelists talked frequently about the importance of job stability, competitive salaries and an appreciation for collaboration. Despite what some might think, members of Gen. Z don’t want their eyes glued to a phone or computer all day. They value face-to-face interaction and they love to learn new things.

“I think the biggest strength of this generation is their desire to learn,” said James Carter, Manager of Talent Acquisition, who oversaw the event. “Many of them seem eager to learn and grow and they’re doing so by finding better ways to contribute to the organization they’re with.”

James said the purpose of the event was to better understand the coming generation and prepare the company to work successfully with them as they’re brought into the fold.

“A better understanding of how we work with the people around us is vitally important to our individual and organizational success,” he said. “It is inevitable that we will have Gen. Z coworkers in the near future, so we are just being prepared.”

Wayne Piper, Analyst of Employee Development who also helped set up the event, added that Gen. Z’s willingness to learn will help them navigate the changing energy business.

“The energy business is changing so much,” he said. “It’s hard to know exactly what it will look like in the future, but this generation will be able to handle it. They’ve been so hands-on even in their internships and the willingness seems to be there in them. They want their work to be important and they want to contribute. They want to see the value in what they’re doing.”

As tomorrow becomes today, CPS Energy is prepared to bring this new generation aboard and utilize their many talents.

“The more you know about them and what they’re looking for in an employer, the better,” said Wayne. “We want to see how they’ll integrate into our population and see what they’re all about. We’re excited for them.”