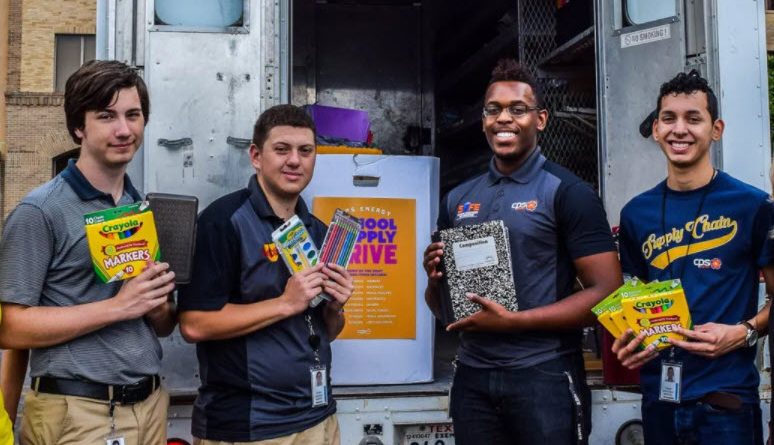 Dominic remembers the challenges he faced getting ready for a new year at Edison High School. There was a lot to think about, so it meant the world to him to get free school supplies. He remembers receiving that first box of donated supplies through Stuff the Bus during his sophomore year and feeling grateful that people outside his family cared enough to make a difference. The Communities in Schools – San Antonio (CIS-SA) program helped remove some of the financial burden for his mom, Barbara, who was working hard to raise Dominic and his sister, Ascensia, on a tight budget.

“It really does take away some of the financial strain,” said Dominic Carrasco, a CPS Energy intern from 2013 – 2015. “It shows that the community cares about my education. It made me want to work hard and go to school every day.”

Dominic, who now works at the Brown & Ortiz Law Firm, is a prime example of the difference our community makes when they invest in the lives of students. As our community continues to battle through the pandemic, Dominic knows just how much donations are needed.

The school supply donations encouraged Dominic to take part in opportunities like InspireU, a one-on-one mentoring program that pairs CPS Energy employees with students who get support from CIS-SA. The program keeps students on track to graduation and inspires them to take the next steps toward higher education.

Dominic’s involvement in the InspireU program led him to apply and take part in three summer internships with CPS Energy. During his internships, Dominic got a chance to give back to the community by helping promote and encourage employees to donate supplies to the company’s annual school supply drive for Stuff the Bus.

He’s grateful for the investment CPS Energy made in him. In 2015, Dominic became the first person in his family to graduate high school and attend college. Recently, he graduated from UTSA with a degree in history. As a Project Manager for Brown & Ortiz, he researches zoning cases and supports their legal work. The initial job experience has encouraged him to pursue a graduate degree and possibly law school.

Meanwhile, he’s encouraging his 13-year-old sister, Ascencia, to follow in his footsteps. To help her get started, he bought her a box of school supplies. As she wraps up her first week at a local middle school, he’s seen firsthand the types of pressures students are facing with the pandemic.

“It’s really been tough on these students,” said Dominic. “Supporting them through Stuff the Bus will take some of the pressure off. Giving sends the message that the community cares for them and their education. It motivates them to keep working hard for their future.”

While the collection of school supplies is over, the virtual fundraiser for the campaign will continue through the end of August. CPS Energy employees are working on raising funds for supplies, uniforms and technology for local students. The funds collected will provide year-round supplies to any student in need attending one of the 150 schools CIS serves. Here’s a breakdown of how your donation can make an impact.

We’re nearly halfway to our goal. Would you like to make a difference? Click here if you would like to participate. Altogether, CIS-SA has a goal to raise $225,000 for their communitywide fundraiser.

Together, we can put People First and make a difference in the lives of students and families. Your donation to Stuff the Bus may introduce students to more opportunities for success as they did for Dominic.