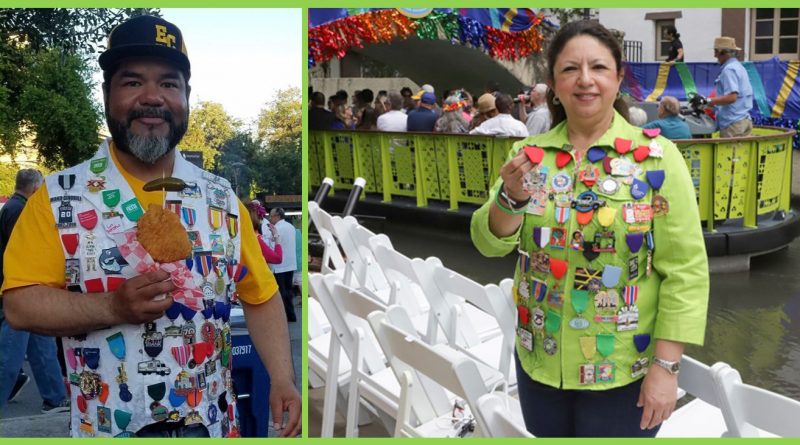 Along with our San Antonio Spurs in the playoffs, Fiesta is the talk of the town right now. For nearly two weeks each year, our city is buzzin’ with Fiesta festivities — from events like the carnival and Oyster Bake, to the Pooch and River parades to a Night In Old San Antonio (NIOSA). Most San Antonians would probably agree that this party with a purpose, which benefits many non-profit agencies, is a celebration like no other.

Along with the events and all those tasty treats like gorditas and funnel cakes, medals have become a Fiesta favorite too. With about 150 medals between them, you could say that Fidencio Castellanos and Lalie Gomez are CPS Energy’s king and queen of “heavy medal.”

“It’s a fun thing to do,” she says of her medal-collecting hobby. “I love the creativity that goes into the design of each, and I like the fact I’m supporting great causes and organizations when buying them.”

Lalie’s interest in collecting Fiesta medals jumpstarted in 2014 when a coworker gave her a Basura Bash medal. She acquired nearly 75 medals before her home was burglarized in 2016 and her collection taken. Despite the setback, Lalie’s Fiesta spirit hasn’t waned and this year she’s added about a dozen new medals to her once-again growing assortment.

While she cherishes each of them, Lalie notes that the Texas Organ Sharing Alliance (TOSA) medals are dearest to her and one that she seeks out each year. Lalie has been a TOSA volunteer for 16 years, since the death of her 20-year-old daughter and organ donor, Yvette.  “The medal represents the legacy that organ donors have made in the community to help save other’s lives,” she says. Her daughter’s legacy lives on through the five lives she helped save through her donation.

Like Lalie, Fidencio has an ever-increasing treasure trove of Fiesta medals – nearly 100 of them! He recently purchased a new, longer vest that he’s since bedazzled with his expanding prized collection. The Equipment Operator and relief foreman for our Underground Integrated Operations team has been hooked on Fiesta medals for about six years, when CPS Energy’s first medal debuted.

“It’s a fun hobby and great way to celebrate Fiesta. The CPS Energy and Goodwill medals are must-haves every year,” says Fidencio, adding that his wife works for Goodwill Industries.

Like other die-hard Fiesta-goers, Fidencio gets his groove on – and his medals on — at several events each year, including the kickoff, NIOSA, Fiesta Flambeau parade and Market Square.

“San Antonio is a great party city,” he says with a broad smile. “All the different people getting together to celebrate is awesome!”

“You can meet people from all over the world,” adds Lalie. “Some come here every year just to attend [Fiesta].”

Give us a shout and let us know how many total Fiesta medals you’ve collected.