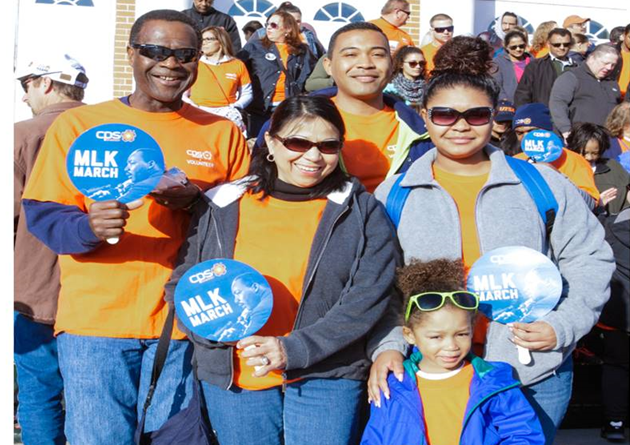 Jarold and his son, Jared, wrapped their feet in plastic bags and put on rain gear to stay dry and warm on a cold, rainy day in January. They noticed a smaller turnout at the start of the Martin Luther King Jr. March compared to other years, but they were glad to be present. Jared and Jarold huddled with the group of CPS Energy employees, wearing bright orange CPS Energy volunteer shirts. Thinking about those who had gone before them like Rosa Parks, they felt proud to brave the elements and stand for freedom and equality with their fellow employees.

“The march is a touching experience,” said Jarold Hosey, Warehouse Foreman. “When I put that orange CPS Energy volunteer shirt on, I get a warm feeling inside. When you see fellow workers out there, it inspires you.”

Each year, rain or shine, the Hosey family joins our company and community for the largest March in the nation honoring the life and legacy of Dr. Martin Luther King Jr. About 20 years ago, Jarold got inspired to make his day off in January more meaningful. Jarold, his wife, Deborah, and his children, Jared and Devon, took part in their first MLK March together. At the time, Jared and Devon had started learning about the Civil Rights Movement in school. The march made history come alive.

“The march involves all kinds of groups that can freely speak their minds, express themselves and not be intimidated,” said Jared Hosey, Financial Services Analyst 2. “My dad has always encouraged me to get involved and not be intimidated. He’s always told me to be myself and not be afraid to speak my mind and be heard.”

Jared’s dad also inspired him to jumpstart a career in Financial Services at CPS Energy after graduating in 2014. He often heard Jarold talk about how the company felt like family and he got a sample of the camaraderie at the MLK March. Now he enjoys marching with his loved ones and his CPS Energy family – a beautiful reflection of our community’s and company’s diverse culture.

Jarold works at our Northwest Service District storeroom and helps manage the storeroom team that provides utility equipment to crews who repair and install equipment for our customers. With 35 years of service, he’s proud to be part of a company that puts People First and has a heart for our community. Every year, when the day of the march draws near, he encourages his fellow team members to sign up and participate.

“I always want to get more people on board,” said Jarold. “I tell them I hope to see them out there. I plan to always keep up the tradition of going out to the March. I’ll participate until I (physically) can’t anymore. “

Along with encouraging his team members to participate, Jarold is passing on his family tradition to his 6-year-old grandson, Jaylen. The family started taking Jaylen to the March two years ago. Last year, he had a blast marching, dancing and cheering to music. This year, he’s already asking when the march is going to take place.

“He has a lot of fun out there,” said Jarold. “Someday when he gets older, I’ll explain to him the importance of why our family goes every year. I want him to carry on the tradition.”

On Monday, the Hosey family will proudly continue their tradition and march with our CPS Energy family during the 33rd annual city-sponsored MLK March. We hope you and your family will join us as we come together to march, believe and let freedom ring.