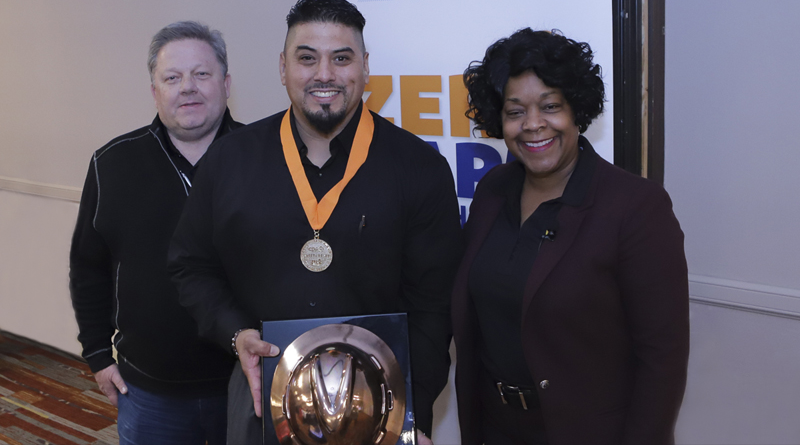 A few years ago, Distribution Trainee Nick Vidal was out doing his job on a Saturday morning, finishing up fixing an outage with his team. Their truck was parked on the side of the road, with safety cones trailing behind to alert the cars driving by that the crew was stopped there. As Nick walked to the back of the truck to load up some materials, his team started shouting at him.

“’Watch out!’ they yelled at me, and I looked up and there was a driver coming right at me, slamming on her brakes,” Nick said. “I just froze. There was nothing else I could do.”

Fortunately, the driver stopped just short of hitting Nick. But that scary moment stayed with him and refused to leave his mind.

“At that point, I was like wow, we need to alert the community to our safety because we are out there all the time,” he said. “There’s got to be something we can do.”

Nick’s resolve was cemented when another car nearly hit him just a few months after the first incident; this time, the car’s side mirror brushed him as it went by. With a new determination, Nick began bringing up the incidents to his leaders and teammates in their frequent safety meetings. After some brainstorming, he came up with the idea for signage that says, “Slow Down as You Go Around,” which could be used on CPS Energy trucks and work sites.

Nick’s leaders thought it was a great idea, and he began working with the Corporate Communications & Marketing team to make the idea a reality. The signage is now in the process of being implemented and produced. For all his efforts, Nick was honored at the first company Safety Reset of the year with the prestigious CEO Courage Award. He gave a speech at the ceremony and received a standing ovation.

“That right there blew my mind,” Nick said. “It was encouraging. I keep to myself and keep a low profile, but I knew that my voice was heard and the company believed in me. In the field, we see these risks firsthand, so it felt really good that all my hard work had paid off.”

“I was very, very proud of him,” said Jesse Orta, Manager of Customer Construction and Nick’s supervisor. “Nick has brought these issues to the table and the best part of it is he has solutions and ideas on how to fix them. Safety has always been priority number one in the CPS Energy culture and it’s so important because we want to go home safe.”

Soon, Nick’s signage will be in use, but he doesn’t plan on stopping there. He has other safety projects he’s working on, including some upcoming videos, among other things. “I want to captivate the audience and let them see what it takes for us to get the power back on,” Nick said. “I’m very proud of what I do, and I just want the community to see that we are doing our best, but we need their help so that we can stay safe.”