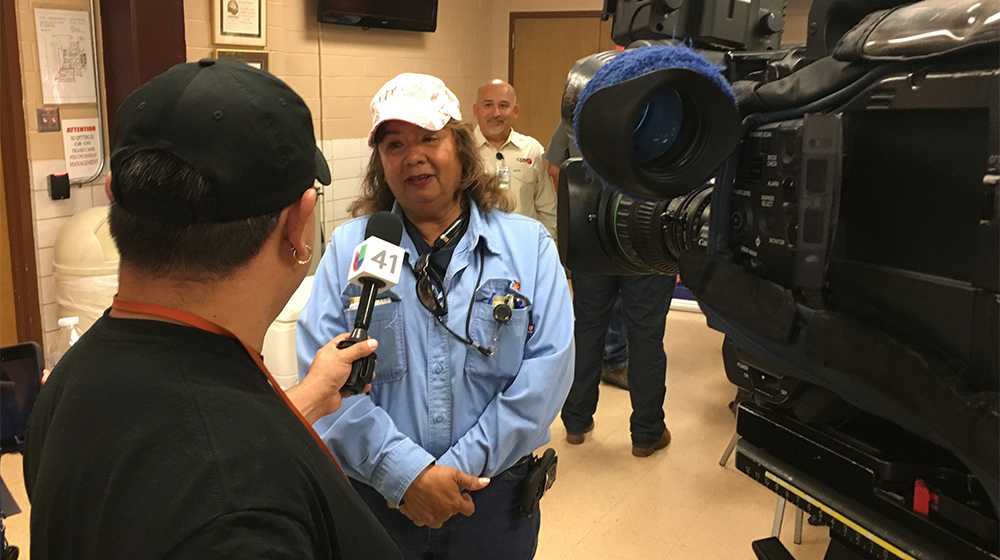 Bertha Coronado owns a home in Rockport, Texas. Last Saturday, the CPS Energy employee watched news reports reveal the devastation the small coastal town experienced as Hurricane Harvey, a category 4 hurricane, made landfall. She could only expect the worst.

A day later, her expectations were realized. A neighbor in Rockport sent images of her damaged home to Bertha. Her neighbor’s home was shredded – nothing was left but parts of the home’s wood frame. The images of the damage opened Bertha’s eyes to something more. Her four-bedroom home – a home she has owned for 40 years – should have been easy to see through what was left of her neighbor’s home. There was nothing there to see. Bertha’s home was gone.

Bertha has yet to see the damage, in person, to her home or the Rockport community. Over the next few days, she may have that chance. She is one of 53 CPS Energy team members who are lending a helping hand to restore power to communities ravaged by Harvey along the Texas coast.

“My home was knocked out,” Bertha says. “I know how much it hurts. I’m eager to help somebody else that is in the same situation.”

On Wednesday, the team arrived in Schulenburg, a command center and staging area set up by AEPTexas. They were dispatched to Victoria on Thursday and continue restoration work there today.

Bertha is an equipment operator. It’s her job to dig holes and set new poles for power lines, with hopes that once electricity is restored recovery can begin.

Before the storm, Bertha said she was contemplating a few home repairs. Now, she will have to completely rebuild. Despite the loss, she is excited to be part of an effort that will help rebuild the lives of people who live in these communities.

“This is the first time I’m going on such a trip,” says the 28-year veteran who is the lone female on the CPS Energy team. “I’m sure my team will support me and help me a lot.”

Bertha and the team will likely spend weeks along the coast restoring power and doing their part to rebuild lives.