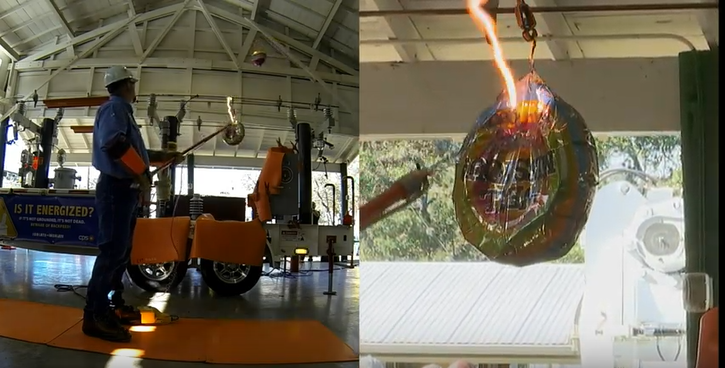 Let’s Fiesta San Antonio! This is a phrase you will likely hear throughout the rest of this month. And, if anyone knows how to Fiesta, San Antonio does. Many of us will host get-togethers, family events, attend parades and much more. A staple for almost any party are balloons. Let’s face it, they bring out the kid in all of us. But have you ever thought about where balloons go when they are released instead of disposed of properly? Well, some of those drift into our electric lines, the result, can be a power outage that might just turn the lights off at your party.

Since 2015, our distribution system has experienced 67 outages directly attributed to Mylar balloons affecting more than 47,000 customers. Keep in mind, these are power outages that could have been avoided.

Mylar balloons, also known as foil balloons, are often chosen over traditional latex balloons because of their shiny appearance and durability. The shiny appearance is due to a metallic coating, which can conduct electricity. They are generally safe; however, if they escape or are released, they can encounter overhead electrical equipment and power lines resulting in safety concerns and service interruptions.

If you see a Mylar balloon in contact with an electric line, please stay away from the utility pole. If it contacts an energized line, the balloon and string become part of the electrical path to the ground and could result in serious injury.

Power outages caused by Mylar balloons come with its own set of challenges. Identifying the locations where the Mylar balloons are tangled with overhead power lines can often take a while as crews have to “patrol” our circuits and find the issue.  This can often lead to delays in restoring power to affected customers. Sometimes this happens at night, making it more difficult to spot the culprit.

So, whether its Fiesta, a birthday party or during an upcoming graduation celebration, keep in mind, getting rid of Mylar balloons properly can help protect you from power outages.  You can help us promote safety and avoid service interruptions by not allowing them to escape or be released. And, unless you’re a big fan of deflated Mylar balloons hanging on wires, not disposing of them properly is just an eyesore.  If you see balloons hanging on our wires, let us know by calling 210-353-2222.  Our crews can remove the balloons before they leave you in the dark.