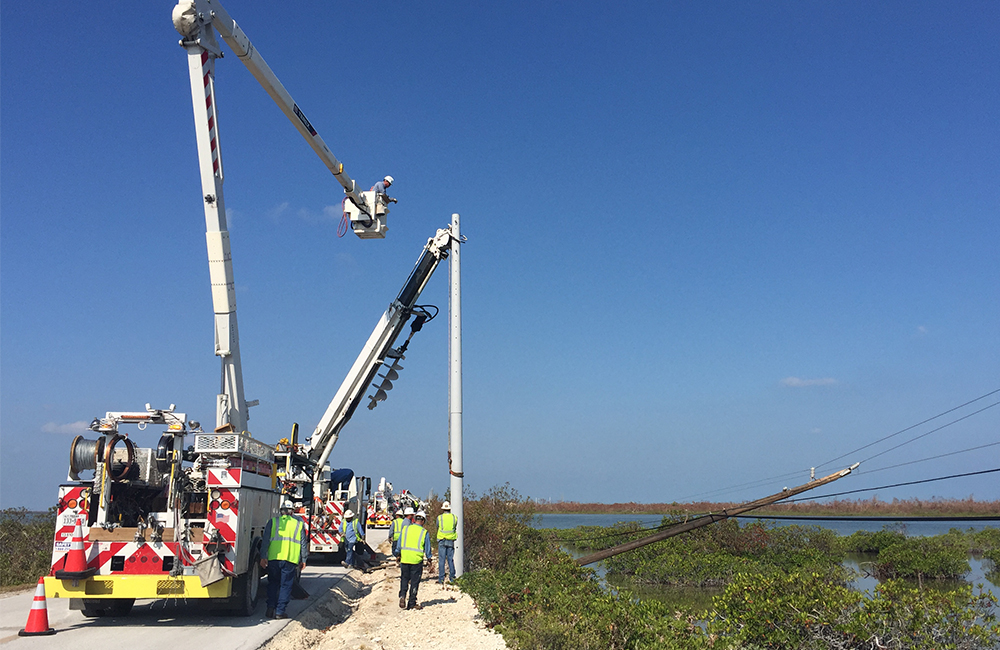 Hurricane Irma may be long gone, but it won’t be forgotten. Almost two weeks after the category 5 hurricane hit the Florida coast and wreaked havoc across the state, many communities are still reeling. After Hurricane Harvey, CPS Energy answered the call in Florida and, through the restoration of electricity, is helping communities in the Sunshine State start to recover and rebuild.

“Thirteen days after landfall, there were still cars flipped over, boats in the middle of the road, poles down, and transformers down,” says Eric Fassett, senior director of Southwest Service District and leader of our 58-person restoration crew now in the Florida Keys, one of the areas hardest hit by Irma. They arrived in Jacksonville on Sept. 14, spent four days helping restore power to more than 60,000 customers there, before caravanning 500 miles south to the southern tip of the state.

“We really weren’t prepared for what we came across,” says Fassett, remembering first impressions of the Keys as the team arrived. “I’ve been in four hurricane deployments in my career. This blows me away. We haven’t seen this type of destruction in any of the deployments we’ve been to.”

“There is total wind devastation. There are wood and concrete poles that were snapped like toothpicks.”

The hurricane did not discriminate. Trailers were leveled, homes were moved, and even “waterfront compounds,” like the home of Jimmy Johnson, were flooded. Just days ago, residents were allowed to use running water. In many areas, there still is a nightly curfew. Displaced residents are still relying on Red Cross shelters and FEMA vouchers. Some parts of the Keys have power, while others are still waiting. Some businesses are starting to reopen.

According to Keys Energy Services — the utility we’re helping — there are roughly 3,600 customers currently without electricity. However, Fassett says there are likely more without power as the utility continues to assess damage to its system. By original estimates, Keys Energy believed more than 300 poles would need to be replaced.

Logistics, along a string of islands filled with overturned trailers, scattered trees and debris, has been a challenge. Our crew is working 15 hours a day, starting with breakfast at 6:00 a.m., then shuttled 10 miles to their vehicles, and often caravan another 35 miles to a worksite. At the end of the day, the trip is repeated back to a hotel in Key West where the team is staying.

“We’re doing great. Everybody’s working together,” says Jason Gallo, a distribution trainee from Northwest Service District who is on his first restoration trip. “We’ve got good communication. We’re just trying to get the lights back on for these people.”

“I’m sure this would be a great place to visit. But right now, it’s a little bit beat up.”

Our team is making a difference. For example, on Thursday night, it restored power to the remaining 45 residents without electricity in Middle Torch Key. In many areas like these, power wasn’t expected to be restored until October.

The CPS Energy team likely will remain in Florida until the middle of this week.

While every storm restoration is a unique challenge, the trip to the Florida Keys will likely be a trip our crew will never forget.