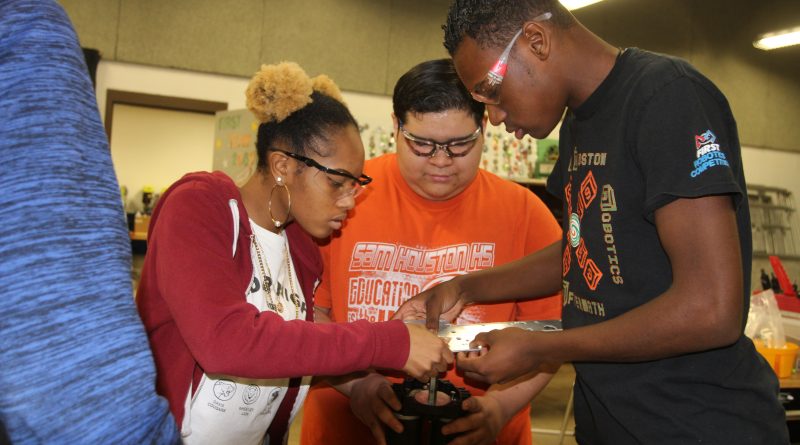 Many teens dream of one day owning a sports car. But X-Damian Valadez, who also goes by “X”, doesn’t just want to own one. He wants to build one himself – specifically, a 1969 Dodge Charger RT. X says a Hot Wheels toy of the sports car sparked a childhood dream to build his own. Watching Vin Diesel race the car in The Fast & the Furious fueled his intrigue even more.

X’s childhood dream drove him to enroll in the Engineering Career Institute at Sam Houston High School, where he’s now a sophomore and a member of the 2969 Robotics Team. The robotics team is not only gaining hands-on experience in mechanics and technology, but also gets to compete against schools from around the world at robotics competitions organized by For Inspiration and Recognition of Science and Technology (FIRST).

Earlier this month, X and his teammates took part in the FIRST in Texas Kickoff at Villita Assembly Building, which marks the beginning of the robotics design and build season. San Antonio Mayor Ron Nirenberg, CPS Energy President & CEO Paula Gold-Williams and other CPS Energy staff hosted nearly 400 students, teachers and staff from 29 local schools to jumpstart the season. Each year, CPS Energy sponsors FIRST and recruits employees to volunteer for related events. The focus is to encourage students to excel in science, technology, engineering and math (STEM) fields.

Cristina Duarte, Manager of Education & Mentoring Programs, says CPS Energy hopes students will choose to pursue careers at the Company or in our community.

“We’ll always have a need for individuals with careers related to STEM,” said Cristina. “Whether it’s a career as an engineer or lineman, the need will always be there. By participating in the kickoff and other STEM-related events throughout the year, CPS Energy can introduce students to careers they may not know exist.”

During the kickoff, students learned about this year’s competition theme and challenge – Destination: Deep Space. Teams also received kits weighing 70 pounds that contain parts they will use to build their robot. Diana Godines, engineering teacher and team coach, said she enjoyed hearing the introductory remarks from Paula who is a proud alumnus of Sam Houston High School.

“I think Paula, being a Sam Houston graduate and being the CEO of a major company in San Antonio, is so important for our students to see,” said Diana.

She noted CPS Energy sets an important example for students and is an outstanding industry partner. Along with providing internships to former students like Gabriel Luna, the community-owned utility is a good role model for being problem solvers.

“If power goes out in the city, CPS Energy must figure out how to get it back on,” said Diana. “The fact that CPS Energy has employees who use their problem-solving skills to keep the lights on for our community is important for our students to hear about.”

Diana also pointed out that students must do a lot of problem solving while building their robot and when they’re in the heat of competition. If something breaks down, they must quickly come up with a solution on the spot.

X said building the robot is his favorite part of the competition. He enjoys working with his teammates to use the raw materials to piece together something from scratch. It’s preparing him for what he wants to do in the future.

“I can see myself someday working with a team on an assembly line to build cars,” said X.

Until that day comes, the teenager plans to keep honing his skills to land a job that will allow him to save up some cash to build the car of his dreams.

On Friday, March 8, X will be competing with his teammates at John Jay High School in the Alamo District event during the first few weeks of the robotics season.