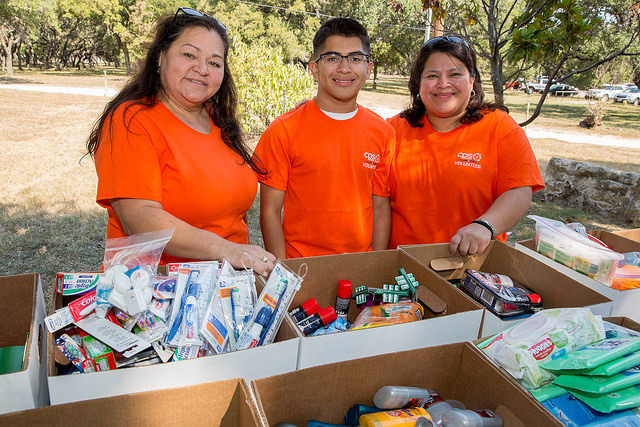 San Antonio has been home to a consistent military presence for nearly 300 years. It’s why we’re called “Military City USA.”

Today, CPS Energy serves one of the nation’s largest active and retired military populations. San Antonio is also the home to the Department of Defense’s largest medical center at Joint Base San Antonio Fort Sam Houston.

We recently partnered with USO San Antonio on a United Way Day of Caring event as part of our annual employee giving campaign.

In October, employees throughout CPS Energy came out in support of the United Way “fun fair” to enjoy great food, carnival-themed activities and family entertainment from Finding Friday, NXG Dance Crew, John the Magician and Zoomagination.

Along with great festivities, employees and retirees generously donated enough toiletries to fill 24 boxes for the USO’s “Support Our Troops” donation drive and personalize cards for military service personnel. In addition, with the proceeds from the event admission and food/activity tickets, CPS Energy raised $5,000 directly for USO San Antonio.

On this Veteran’s Day, we celebrate the service of all U.S. military personnel. To those men and women veterans and active service members who represent CPS Energy, those who call San Antonio home and those just visiting – our heartfelt thanks for your sacrifice and dedication in serving our country!