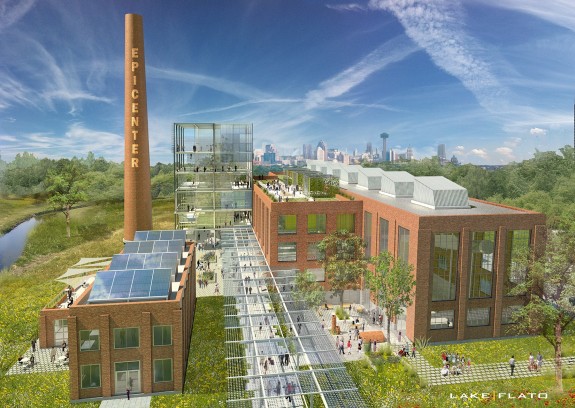 CPS Energy New Energy Economy partners, OCI Solar Power, Silver Spring Networks, and Landis+Gyr, have joined with the San Antonio community, agreeing to become founding sponsors and commit a lead gift of $15 million to create the Energy Partnerships Innovation Center, EPIcenter. The center will focus on clean energy technologies and innovation and will be located at the historic Mission Road Power Plant. The EPIcenter will be uniquely focused on new and emerging energy industry technologies.

“Building on the tradition of the public/private partnership that has forged the Mission Reach, we hope to create a magnet for driving energy innovation and addressing the complex challenges related to providing affordable, reliable energy,” said CPS Energy President and CEO Doyle Beneby. “The EPIcenter will promote energy-sector education, research, and innovation in an effort to directly impact and stimulate job creation, urban economic revitalization, and business development rooted in the New Energy Economy.”

“Today’s announcement is just the beginning for what will no doubt become a part of San Antonio’s growing reputation as an innovative and forward thinking Energy Center,” said District 5 City Councilwoman Shirley Gonzales. “On the heels of other economic development efforts in this area, the EPIcenter is a step toward a new future of socially responsible workforce development, new and sustainable energy technology advancement, and job creation through a commitment to diversity and innovation.”

Details of the facility will be finalized following a community outreach process. The EPIcenter is envisioned as a community space to include an auditorium for conferences and events, collaborative and open work spaces, energy exhibits, education and presentation areas, office space, and a New Energy Economy think tank.

“The idea is to catalyze ideas for new energy innovation into realities, jobs, even companies,” said Beneby. The exhibits are expected to include artifacts from CPS Energy’s long history in the community, as well as examples of new and developing energy technology.

The re-imagined former power plant will support not only the CPS Energy mission of exploring new ways to provide affordable, reliable, and sustainable energy, it will fuel economic development and research by bringing financial support to San Antonio from outside the local community. The EPIcenter is proposed to operate as a nonprofit organization, led by a board comprised of CPS Energy and New Energy Economy partners. The nonprofit would be funded entirely with private dollars raised regionally, nationally and internationally.

Through a visioning process, CPS Energy developed preliminary concepts for the facility, including an architect’s rendering of how it might look. It would occupy the five-acre campus, while paying homage to the site’s long history as “Station B,” which provided gas-powered electricity to San Antonio for 95 years until it was decommissioned in 2009.

Renderings depict the iconic red brick chimney and original buildings meshed with energy-efficient flexible spaces that can expand or collapse depending on audience size and type. It could serve as a community center, innovation lab, and business incubator.

Specific plans for the future facility will be finalized after officially filing for 501(c)(3) status, the announcement of the Board, and the selection of an executive director to lead fund development. The first phase of development is targeted for completion in early 2018.