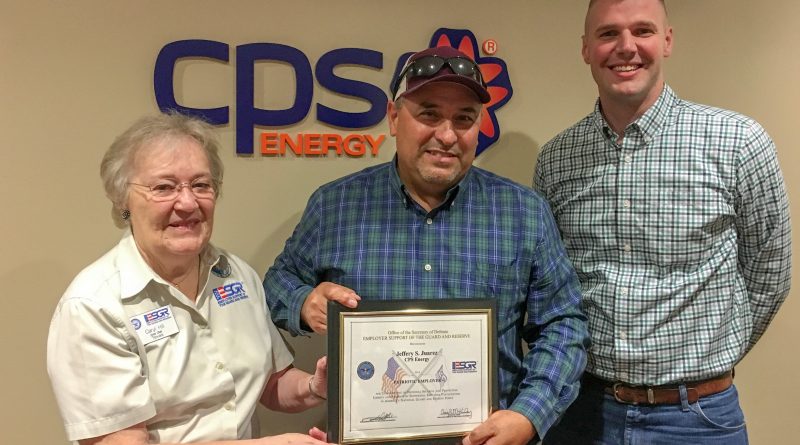 As proud residents of our community, which is officially known as Military City USA, CPS Energy team members are always proud to support our men and women in uniform. Many of them have family members, friends and neighbors that serve. On top of that, we have more than 300 military veterans in our workforce. Supporting veterans is just a natural part of our Company’s culture where we put People First. So when Jeff Juarez, a Manager of Employee Development, approved his new employee’s request for military leave, Jeff didn’t think his simple act of support would lead to an award.

Last Thursday, July 12, the Employer Support of the Guard and Reserve (ESGR) presented Jeff with the Patriot Award for his outstanding support of Seamus Nelson, an Employee Development Analyst who also serves as a Navy Reservist. Seamus submitted his manager’s name for the award, which recognizes those who support citizen warriors in various ways including flexible schedules, time off prior to and after deployment, caring for families, and granting leaves of absence.

When the reservist had to request military leave the day before he was to start working at CPS Energy, Jeff supported him without hesitation. “I had to call Jeff and ask for two weeks of military leave,” wrote Seamus in the award submission. “Jeff said, ‘No problem. We’re glad to support the work you have to do.’ “I’m coming up on my second military leave with the Company as I write this, and Jeff has remained incredibly supportive.”

Seamus said many of his shipmates don’t get any support, including some who get active resistance. Some have even lost their job.

“The entire leadership team at CPS Energy not only respects my career, but treats it as value added to the company,” he said. “I am proud to be a Navy Reservist and I am proud to be part of the CPS Energy team that truly puts People First.”

The Patriot Award came as a great surprise and honor to Jeff, who said he was proud to receive the award and is grateful for the opportunity to do his part to support the men and women who defend our country every day.

“With them doing what they do, I sleep better at night,” said Jeff. “Supporting them is just a way to thank them for their service.”

“About 10 percent of our workforce has served in the military and I’m proud of the fact that CPS Energy enables that and supports it,” said Lisa. “It’s also a testament to Seamus and what a good employee he is that he serves in addition to doing his job on a daily basis. He recognizes what it means to his team when he’s away and he took the time to recognize his leader for the support.”

Because one of our team members was recognized with a Patriot Award, our Company is eligible for the Above and Beyond Award. The award recognizes employers at the local level for going above and beyond the legal requirements of the Uniformed Services Employment and Reemployment Rights Act by providing their Guard and Reserve employees additional, non-mandated benefits.

Congrats and thanks to Jeff and all our other leaders who support our military veterans at our Company! Also, thanks to Seamus for taking time to submit the entry and for his service to CPS Energy and our nation.