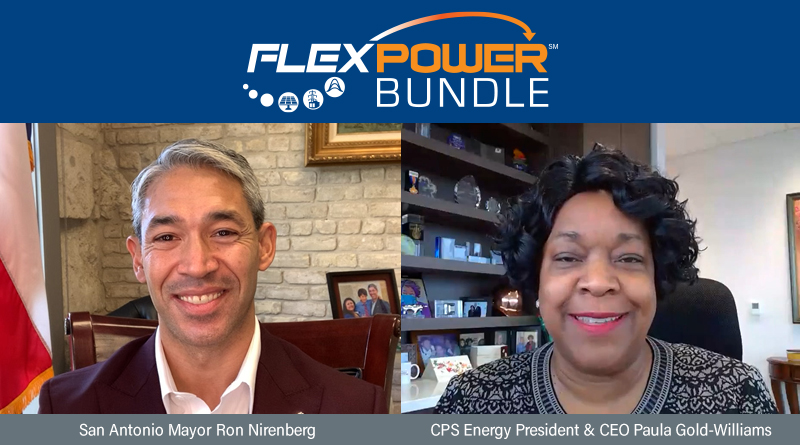 SAN ANTONIO, Texas – (Dec. 1, 2020) — Today, CPS Energy, the largest municipally owned, fully-integrated electric and gas utility in the United States, has formally launched a Request for Proposal (RFP) seeking to add up to 900 MW of solar, 50 MW of energy storage and 500 MW of firming capacity as part of the utility’s new FlexPOWER BundleSM initiative.

The FlexPOWER Bundle is part of CPS Energy’s Flexible PathSM and is designed to replace some aging generation capacity and introduce new technologies as firming capacity to provide around-the-clock energy reliability for our San Antonio community.

CPS Energy has been an environmental leader among utilities for decades.  Every year, the company works with many community partners to make meaningful steps toward full carbon neutrality by 2050, which aligns directly to the City of San Antonio’s Climate Action & Adaptation Plan (CAAP) and the Paris Climate Agreement.  CPS Energy is a forward-thinking energy utility, and with support from Mayor Ron Nirenberg and the City Council, San Antonio has been designated a “Shining City” by Environment Texas, ranking 1st in the state and 5th in the country for solar capacity. CPS Energy also ranks 2nd in the nation among municipally owned utilities for total solar, owned or contracted. The FlexPOWER Bundle is part of CPS Energy’s continued commitment to help Greater San Antonio reach net zero emissions by 2050 or sooner, if possible.

“I created the Flexible Path strategy in 2017, and since that time our great team of 3,100 People First Champions have been working diligently to bring this concept to life,” said Paula Gold-Williams, President & CEO of CPS Energy. “Through this continually evolving strategy, we are working with our customers to thoughtfully lower San Antonio’s carbon footprint. In the next phase of our Flexible journey forward, the global FlexPOWER Bundle RFP will help us find solid solutions from around the world, which will potentially include exciting new and cleaner energy technologies. San Antonio has trusted us to be their diligent and effective energy provider for 160 years. This RFP is the next step that will further ensure we optimize innovation while maintaining energy Reliability and helping the Environment.”

By procuring multiple resource options at once as a diversified bundle, CPS Energy is focused on identifying the best combined technologies that enhance Environmental Responsibility, while maintaining the Reliability and Affordability customers expect.

“With global attention on CPS Energy and our push to expand a resilient portfolio of power generation, our publicly owned utility is poised to become the solar leader in the United States and a pioneer in utility scale resiliency in the world,” said San Antonio Mayor, Ron Nirenberg. “I am proud of what this organization is doing to ensure it continues to be a reliable, affordable, and innovative energy provider that San Antonians have come to expect.”

The RFP seeks both large and small options for solar, energy storage and technologies that provide reliability, with responses expected from large, well-known firms to local, small businesses. Additionally, community solar and storage are also welcome technologies, so everyone from large renewable providers to residential customers have an opportunity to participate – directly or indirectly.

This RFP follows a global Request for Information (RFI) that closed at the end of August of this year.  It was issued in 10 languages and CPS Energy received nearly 200 responses from expert energy providers around the world.  Responses included information and ideas on new and clean technologies and solutions that could become a part of the FlexPOWER Bundle. CPS Energy used the helpful information obtained from the RFI process to enhance its new RFP, which has been thoughtfully designed to help San Antonio lean into its next solid steps toward a cleaner, more Resilient energy grid.

As part of the same August 2020 RFI process, CPS Energy also asked for information about solutions for the next phase of its successful and award-winning energy efficiency and conservation program, called the Save for Tomorrow Energy Plan (STEP). Coming in January 2021, CPS Energy will release another global RFP for FlexSTEPSM that will again be designed to increase direct customer participation and raise their satisfaction.

The following are key dates for the RFP:

CPS Energy expects to finalize the evaluation and shortlist candidates for the RFP by Summer 2021. For more information on the RFP, visit the CPS Energy website www.cpsenergy.com/flexrfp.